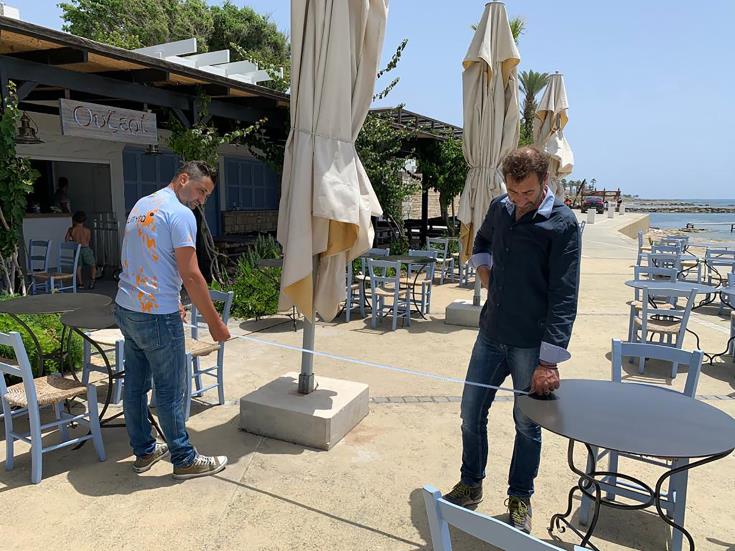 Catering establishments in Paphos are preparing to open their outdoor facilities under phase two of the lockdown exit plan which starts tomorrow.

And Paphos district officer Maria Lambrou said that work is also underway so that the 33 organised beaches in the Paphos district will be ready for swimmers following cabinet’s decision to bring forward their opening to Saturday.

In an announcement, the Paphos Tourism Promotion Company (ETAP) said that, adhering strictly to the rules  a number of hotels, tourist and catering establishments, municipal beaches and other services were preparing to open.

Paphos aspires again this year to be a favourite holiday destination for permanent residents. The company acknowledged that the challenge was to attract as many locals as possible as well as foreign arrivals, with attention geared to extending the summer season by two months on either side — November and March.

ETAP said it was waiting to see the travel advice of tourism generating countries as well as the decisions of airlines and tour operators so as to obtain a clearer picture of what is in store.

Paphis district officer Maria Lambrou said the beaches should normally have been staffed with lifeguards from April 1. Lifeguards are undergoing special training following changes in the regulations to prevent the spread of coronavirus.

There are currently 50 lifeguards on duty with numbers set to rise to 99 — 34 being hired on June 1, eight on August  and seven on September 1.

Geroskipou Mayor Michalis Pavlides said that preparations have started so that beaches are ready in line with regulations. Checks will be carried out by health inspectors of the state and of the municipality as well as by traffic wardens.

Polis Chysochous Mayor Yiotis Papachristofi said that the municipality will have two inspectors to carry out checks at the beaches regarding compliance.

Peyia Mayor Marinos Lambrou said Coral Bay was one of the most popular beaches in Cyprus and assured that all hygiene rules will be implemented.

Municipalities, beaches committee awaiting instructions ahead of May 23

By In Cyprus
Previous articleHigh temperatures favour fires but do not cause them, Fire Service says
Next articleUpdated: Fire near old Nicosia airport contained (photos)