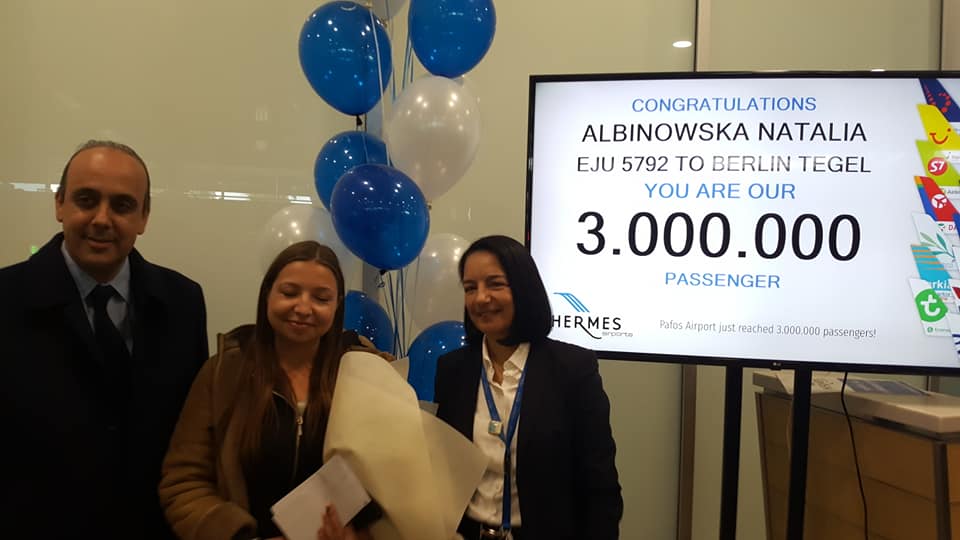 Paphos Airport on Wednesday welcomed its three millionth passenger for 2019, setting a new record since the airport first started operations.

Addressing the event, Hermes CEO Eleni Kalogerou said that three million passengers was more than just a number but tangible proof of the airport’s steady growth in the past decade.

“As Hermes Airport we believed in the prospects of Paphos International Airport and by extension of the wider region of the west coast of Cyprus from the beginning, and saw  early on the many prospects which if properly tapped could contribute to promoting Cyprus as a year round destination in a substantial and not just complementary way,” she said.

That is why on taking over the operations of the airports of Cyprus in 2006, Hermes invested €127m on new infrastructure and a new passenger terminal at Paphos Airport, she added. It delivered the new facilities in 2008 and 11 years on, passenger traffic at the airport has risen from 1.7 million at the end of 2008 to 3 million today, Kalogerou said.

This winter, there has been an increase in flights to Paphos Airport with the addition of new destinations such as Beirut, Katowice and Malta and the resumption of the popular service to Athens. Moreover, as from the forthcoming summer season, eight weekly flights with a capacity of 100,000 seats to German airports will be offered from April to November, 2o20,  Kalogerou concluded.