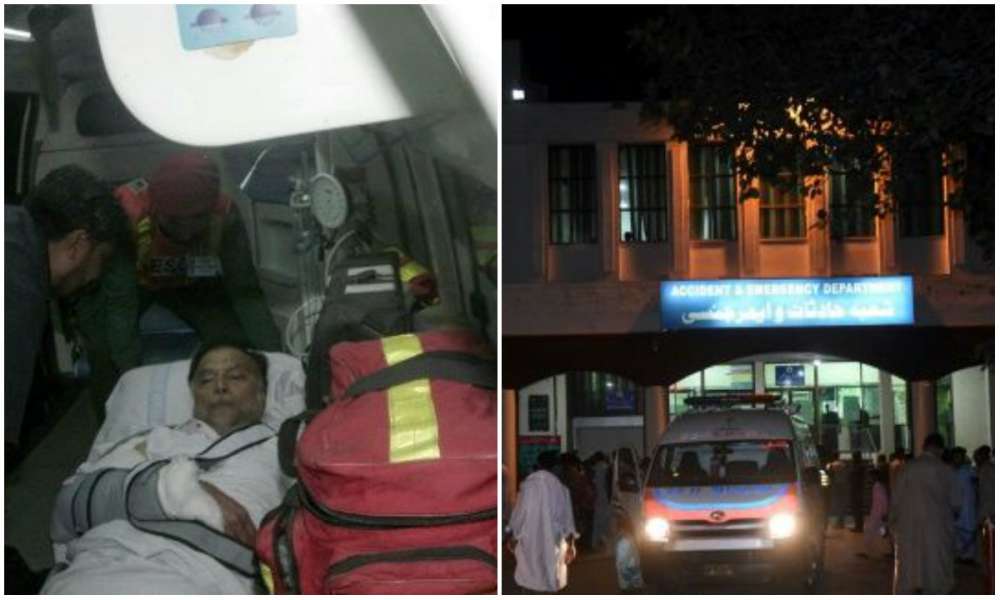 Pakistan’s interior minister was recovering in hospital Monday after being shot in a suspected assassination attempt possibly linked to blasphemy, with the attack seen as a “bad omen” for nationwide elections.

Ahsan Iqbal, 59, was shot in the right arm as he prepared to leave a public meeting in his constituency in Punjab province late Sunday.

A man identified by police only as “Abid” and said to be in his early 20s was wrestled to the ground by police and bystanders as he was preparing to fire a second shot. He has been taken in to custody.

The local deputy commissioner Ali Anan Qamar told AFP that the shooter said he carried out the attack over a small amendment to the oath that election candidates must swear which was hastily reversed last year after it was linked to blasphemy.

The controversy ignited a three-week sit-in last November by a previously little-known Islamist group which paralysed the capital and ended when the government capitulated to the protesters’ demands — including the ousting of the federal law minister — in a deal brokered by the military.

At the time many Pakistanis and analysts warned that a dangerous precedent had been set in which fringe groups could bend the state to their will by citing blasphemy, a highly inflammatory charge in the conservative Muslim country.

Iqbal, known as a champion of Pakistan’s much-persecuted religious minorities, was heavily involved in the negotiations at the time. He has previously condemned hate speech against groups such as the Ahmadis, an Islamic minority sect who were at the centre of last year’s controversy.

After the shooting he was rushed first to a local hospital and then airlifted to Lahore, where video footage released by his ruling Pakistan Muslim League-Nawaz (PML-N) showed him being lowered from a helicopter on a stretcher, his eyes open as he responded to questions.

Doctors later said he was in stable condition.

The attack was swiftly condemned by the international community, including the US ambassador and the French embassy, as Pakistanis voiced fears it represented an attempt to “weaken democracy” ahead of the federal elections, widely expected to be held late this summer.

Ziauddin Yousafzai, the father of Pakistani Nobel Peace Prize winner Malala Yousafzai, tweeted that he “strongly condemned” the attack, calling it “(a) bad omen for upcoming general elections that is supposed to be free, fair and transparent.” The vote will only be Pakistan’s second ever democratic transition, and with the PML-N in disarray since Prime Minister Nawaz Sharif was ousted by the Supreme Court over graft allegations last summer, there has been growing speculation it could be delayed.

The court banned Sharif from politics for life, while foreign minister Khawaja Asif was also ousted by the Islamabad High Court late last month for violating election laws. Sharif and his supporters have repeatedly denied the allegations, suggesting they are victims of a conspiracy driven by Pakistan’s powerful military to reduce the sway of their party.

Despite the setbacks, the party has won a string of recent by-elections, proving it will likely remain a force in the vote. Blasphemy can be punishable by death under controversial Pakistani legislation, with even unproven allegations sparking mob lynchings and murders.

Had the assassination attempt on Iqbal succeeded, it would not have been the first political killing linked to blasphemy: in 2011 then-Punjab governor Salman Taseer, a liberal who had called for reformation of the laws, was gunned down by his own bodyguard in broad daylight in Islamabad. Iqbal, touted as a potential prime minister when Sharif was ousted last July, is a US-educated lawmaker from a political family long associated with the PML-N.

Considered the brains behind the party’s development agenda, he previously headed up the planning ministry. Pakistan’s Interior Minister Ahsan Iqbal, 59, was shot in the right arm as he prepared to leave a public meeting in his constituency in Punjab province late Sunday. Pakistan interior minister Ahsan Iqbal was rushed first to a local hospital and then airlifted to Lahore, where video footage released by his ruling Pakistan Muslim League-Nawaz (PML-N) showed him being lowered from a helicopter on a stretcher.

By In Cyprus
Previous articleUN Assistant Secretary-General for Peacekeeping Operations to visit Cyprus next week
Next articleShots fired at police: third person under interrogation