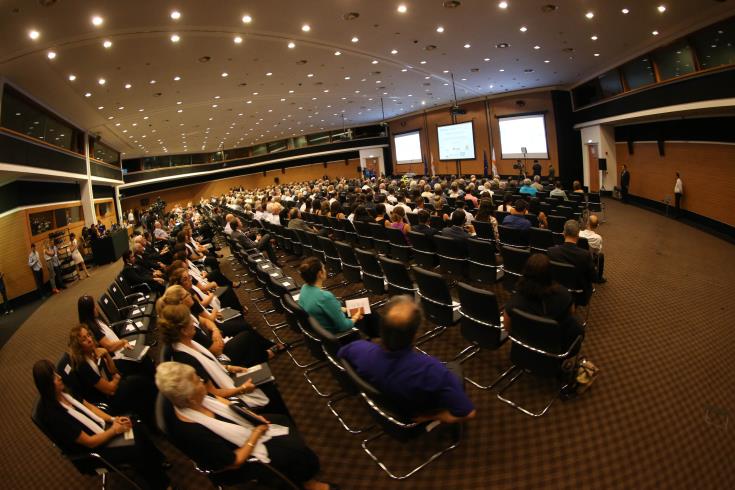 Overseas Cypriots who will gather in Nicosia on August 27-30 for their annual Conference will discuss, among others, ways by which they can contribute to avert the Islamization of the Turkish occupied areas of Cyprus.

Presidential Commissioner, Photis Photiou, has told CNA that this issue will be addressed for the first time during a special session at the Conference, noting that they will discuss ways by which the diaspora can act towards decision-making centres with a view to stop the Islamization of Cyprus’ areas occupied by Turkey since the Turkish invasion of the island in 1974.

The Presidential Commissioner said that the latest developments in the Cyprus problem as well as Turkey’s provocations in Cyprus continental shelf/EEZ will also be discussed, while the delegates will be briefed on the Republic of Cyprus’ Energy programme.

Moreover, he noted that they will look into the issue of the missing persons in Cyprus “to see how overseas Cypriots especially in the US and the UK can contribute” to address it. Photiou thanked the organisations of overseas Cypriots for their long-standing support and help to Cyprus’ cause.

He described as important a round-table discussion which will take place during the Conference and to which the Ambassadors of the US, France, the UK, Egypt and Israel in Cyprus have been invited to participate to discuss developments in the region and the relations of these countries with Cyprus. “These are five countries directly related to what is going on in the region”, he noted, adding that “this will be a very interesting discussion”.

The opening of the World Conference of Cyprus Diaspora (POMAK-PSEKA-NEPOMAK) will take place in the evening of August 27. President of the Republic Nicos Anastasiades will declare the opening of the Conference. Photiou will welcome the delegates while, Archbishop Chrysostomos, House President Demetris Syllouris, Greek Deputy Minister of Foreign Affairs for Diaspora Greeks, Antonis Diamataris, and Presidents of the organizations of overseas Cypriots POMAK, PSEKA and NEPOMAK will also deliver speeches during the opening ceremony.

Photiou  said that on 28 August President Anastasiades will receive delegates at the Presidential Palace, where he will brief them on developments in the Cyprus problem. A reception will follow during which members of the Cypriot diaspora will be honoured.

Delegates will also be informed about the developments in the Cyprus problem and on energy issues during the Conference by Foreign Minister Nikos Christodoulides, on August 28 and by Energy Minister Yiorgos Lakkotrypis on August 29. Moreover, leaders or representatives of parliamentary political parties will address the delegates.

The Conference also will be attended by Isaac Herzog, Chairman of the Jewish Agency for Israel, Minister for Romanians Abroad Natalia-Elena Intotero and the Italian Under-Secretary of State responsible for the diaspora Ricardo Antonio Merlo.

Photiou underlined the importance of the presence of young overseas Cypriots at the Conference, noting that several issues related to programmes concerning them will be discussed. He went on to say that at the end of August 15, young members of the diasporas of Cyprus, Greece and Israel will visit the three countries. They will be in Cyprus when the Conference of Cyprus Diaspora will be taking place so that they will be able to attend it, he added.

On the sidelines of the Conference, Photiou will also have bilateral talks with the Greek Deputy Minister of Foreign Affairs for Diaspora Greeks, Antonis Diamataris, who will also be paying an official visit to Cyprus. Photiou said that they will discuss about bilateral issues included in the MoU which the two countries have signed as well as about the trilateral cooperation which the two countries have or are planning to have with other countries on diaspora issues.

Turkey issued last May a navigational telex, announcing its intention to start drilling off Cyprus until 3 September 2019. Since 4 May 2019, the Turkish drill ship “Fatih” is anchored 36 nautical miles west of Akamas peninsula, in an area that falls within the Exclusive Economic Zone (EEZ) and continental shelf of the Republic of Cyprus. A second Turkish drill ship, “Yavuz”, arrived off the island’s north-eastern coast on July 8.

In response, EU Foreign Ministers endorsed on 15 July 2019 measures concerning Turkey’s illegal drilling in the EEZ of Cyprus, deciding, among others, to suspend negotiations with Ankara on the Comprehensive Air Transport Agreement and postpone the Association Council and other EU-Turkey meetings. Moreover, the Council reduced the pre-accession assistance to Turkey for 2020 and invited the European Investment Bank to review its lending activities in the country.