Our common aim is a Republic of Cyprus with no guarantees, no foreign troops, Weber says 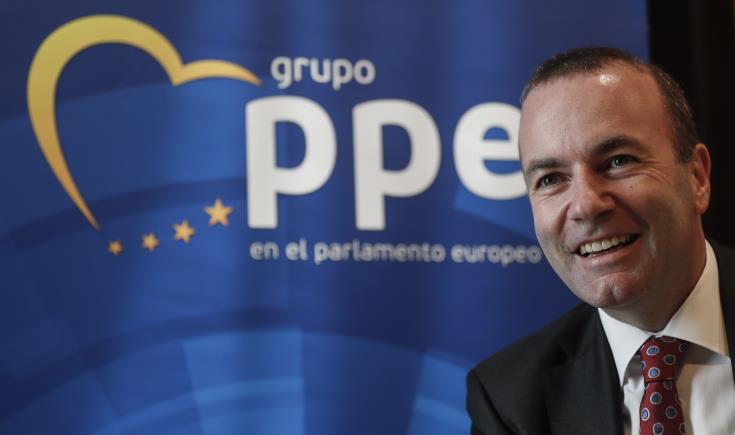 Head of the EPP Group in the European Parliament and candidate to become the next European Commission President Manfred Weber has sent a message of solidarity to Cyprus, noting that we need a Republic of Cyprus which is independent, with no guarantee powers and foreign troops.

He also voiced his view that “the full membership of Turkey inside the EU cannot work,” adding that “we have to find a way to come to a partnership agreement and to stop the full enlargement towards the EU”.

Weber who has chosen Cyprus as his first official visit for 2019 and his European elections campaign, was speaking during a press conference at the Democratic Rally (DISY) headquarters, in Nicosia, with DISY President Averof Neophytou.

He spoke of the difficult times Cyprus went through during the economic crisis, adding that under the leadership of Neophytou and Cyprus President Nicos Anastasiades, Cyprus returned to economic growth.  “Jobs, economic growth, sustainability on the budget is a key issue for the future of our countries and the EU,” he said.

He made it clear that “there are only Europeans; We are equal and we have to treat everyone equally in the EU.”

On the Cyprus question he said that his message is also “crystal clear”: “We all are Cypriots in this question. The Cypriot people can count on the solidarity of the rest of the EU. Four hundred and forty million Europeans are on the side of the Cypriot people when they are about to solve the question here.”

According to Weber the direction is clear, “we need a Republic of Cyprus which is independent”. He said that there is no no need any more for a guarantee status and there should not be foreign troops on this island anymore. ”This is what is our common aim,” he pointed out.

Replying to a question on his view that it would be wrong for enlargement talks to continue with Turkey, he said that there was always from the left side of the political landscape in Europe the idea on the table that ”through these enlargement talks we can make out of Turkey a totally different country in a way, when everybody who has eyes and sees the reality in today’s Turkey sees that this is simply wrong”.

“That is why it is a question of honesty,” he noted.

“I think that after the developments of the last two or three years in Turkey, where we have seen developments where Turkey is distancing itself from the European values, among other things, democracy, the rule of law, freedom of press,” Weber said, adding that “this is a clear proof that this idea was wrong.”

He also noted that “we cannot deal on a European level with Turkey on normal terms when we have still one member of the EU not respected or recognised by Turkey.”

Replying to a question on how citizens can feel closer to Europe he stressed that “we have to build up a democratic Europe and that means that the elections at the end of May this year are the place where the people decide about the future of this continent.”

Weber said that his tour would not just be him announcing his election positions but that it would also be a “listening tour” during which he would listen to citizens’ “concerns and ideas.”

On his part Neophytou said, among other things, that it is not by chance that DISY supports Weber pointing out that “he is a European politician with a vision and with clear positions.” He has a clear vision for a better Europe and he is also a friend of Cyprus and the Cypriot people, he said, expressing the belief that once he is elected, he will help in the effort to resolve the Cyprus problem.

Cyprus has been divided since 1974 when Turkey invaded and occupied its northern third. Repeated rounds of UN-led peace talks have so far failed to yield results. The latest round of negotiations, at the Swiss resort of Crans-Montana, ended inconclusively.