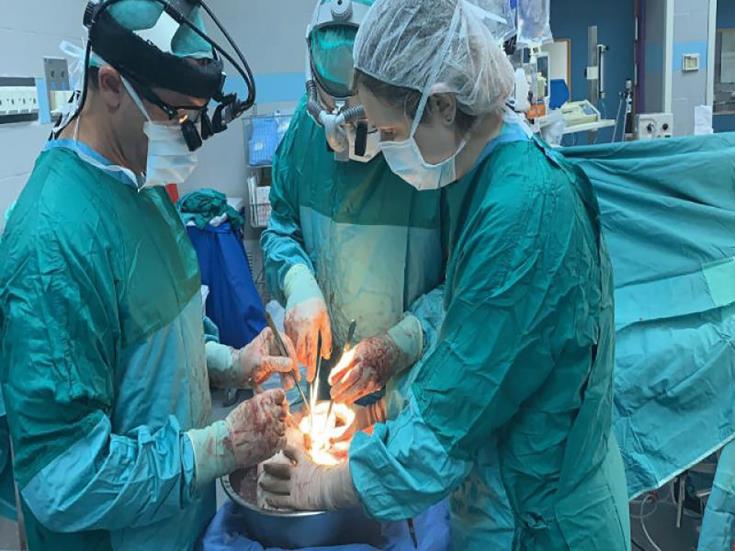 Organs donated from Cyprus for transplant surgeries performed in Israel, in the framework of the two countries’ cooperation, give patients a new lease of life. This year four organs were donated, a liver and three sets of lungs.

In statements to the Cyprus News Agency, Israeli ambassador  to Cyprus, Shmuel Revel underlined the great importance of this humanitarian cooperation between the two countries.

The latest case of a post-mortem organ donation concerned a young woman, whose liver and lungs were donated to Israel for transplants that were performed on two patients there, while her kidneys were transplanted to two patients in Cyprus.

On August 10, Israel’s National Transplant Centre staff flew from Beilinson Hospital, in Petah Tikva, to Cyprus, harvested the organs and took them to Israel on the same day to be transplanted. The team included transplant doctors, a lung cardiac machine operator and operating room staff.

The young woman, who was in Cyprus for holidays, suffered a brain hemorrhage. Her spouse gave his consent for her organs to be donated, Transplant Coordinator at Nicosia General Hospital, Chrystalla Despoti told CNA, thanking her family for this decision.

Despoti noted that only kidney, cornea and pancreas transplants can be performed in Cyprus, adding that lungs and livers from post-mortem donations are donated from Cyprus to the National Transplant Centre of Israel, in the framework of the two countries’ cooperation.

She went on to say that when Israeli medical staff come to Cyprus to harvest the organs and take them, “we facilitate them, in cooperation with the Cyprus police, so that the organs are transferred safely and on time”. Despoti explained that the lungs have to be transplanted within six hours while the liver within 12. The effort is for the transplants to be performed the soonest possible, she added.

It would be regretful not to give these organs in order to be transplanted to patients, since they give them so much hope, she noted, adding that this year there were six post-mortem organ donations in Cyprus.

On his part, Ambassador Revel underlined that “we attribute great importance to this humanitarian cooperation between our two countries. Organ transplantation can save lives and significantly improve quality of life.”

He went on to say that “Israel and Cyprus work closely together in many sectors and also in the field of Health. Many Cypriot doctors have studied and were trained in Israel, and also Israeli students study medicine in Cyprus.”

Revel noted that “we have the basis to further develop our cooperation, since we share a lot of common interests. The collaboration, as well as the good relations between our countries, are mutually beneficial, and ensure a better public welfare for our citizens.”

“Let us all wish and work for a better and healthy future,” he concluded.

According to a press report published in Israel, Dr. Tamar Ashkenazi, director of Israel’s National Transplant Centre said, “that this time the task was particularly complex since we received both liver and lung, and there was a complex timing problem.”

She noted the Transplant Centre usually receives only one organ and sends one team. “Flight and transfers are scheduled according to organ characteristics,” she noted, stressing that the medical staff worked efficiently and the Cypriot staff was excellent as always

Meanwhile, Despoti told CNA that approximately 2500 individuals have up until now been registered to Cyprus’ potential and after death organ donor database that was created in 2013. The number is still small, compared to other countries, but people have begun to show more interest, she noted.

According to Despoti this year some 400 were registered to the database, while during previous years the number of registrations was up to 300 persons per year.

Cyprus and Israel signed in the summer of 2017 a Memorandum of Understanding for cooperation in the field of kidney transplants.

The programme aims at helping patients in need of kidney transplant, who have a living donor available, but are not compatible with each other. In this way the two countries have the opportunity to benefit their citizens whom otherwise would not have been able to have kidney transplants, by creating a pool of potential donors.

Vassilis Hadjianastasiou, Medical Director of the Transplant Centre, told CNA that there are currently four couples from Cyprus and 20 from Israel in this pool of possible donors and recipients.  He noted that no transplant was conducted so far, adding that the bigger the pool the higher the chances are to find compatible donors.

He noted that during the last 8.5 years there was a transplant rejection in 11 cases, while nine patients lost their lives not due to complications of the transplant surgery but due to other causes, stressing that the level of kidney transplants in Cyprus is very high.

By In Cyprus
Previous articleEurope will not leave Cyprus unprotected against Turkey’s illegal actions, Greek PM says
Next articleMainly fine over the weekend, temperatures set to rise