Opening of Japanese Embassy the base for further enhancement of bilateral ties, Ambassador says 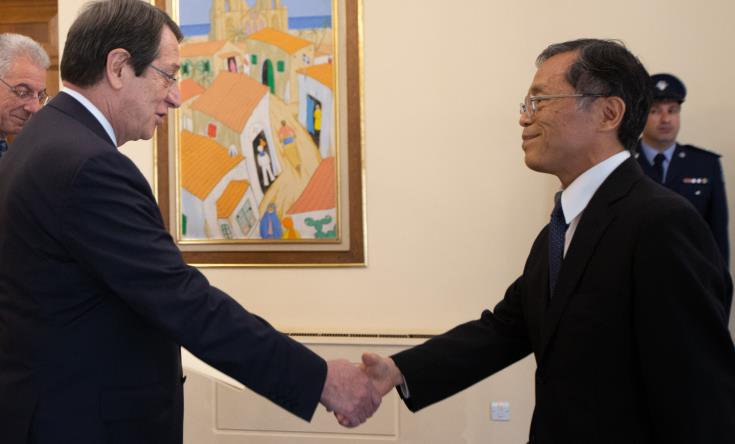 The opening of the Embassy of Japan in Cyprus on January this year is the symbolic representation of the deepening mutual relations and it shall be the base of further enhancement and expansion of bilateral ties in various areas including politics, economy, trade, culture, education, science and technology, the Ambassador of Japan Shinichi Nakatsugawa has said.

Presenting his credentials to President Nicos Anastasiades on Friday, the Ambassador added that active exchange of high level bilateral visits, is also important for the strengthening of the existing friendly relations between the two countries.

The Ambassador added that the negotiations on Japan-EU Economic Partnership Agreement (EPA) came to settlement in December 2017 and Japan- EU Strategic Partnership Agreement (SPA) was agreed in February 2018, pointing out that Japan and Cyprus have favourable opportunities to enhance further economic relations by active use of these institutional frameworks.

As regards the Cyprus Problem, Ambassador Nakatsugawa said that his government will continue its contributions to a peaceful and viable solution based on the related United Nations resolutions as a member of the G7 and the United Nations so that people of Cyprus may live in a secure environment.

Receiving the credentials, the President of the Republic said that the opening of the Embassy of Japan iprovides renewed impetus for the deepening of the relations between our two countries, and further solidifies our long friendship based on our common values of respect to international law, democracy and peaceful coexistence.

He added that as an EU member, Cyprus will continue working towards enhancing Japan’s relations and cooperation with the European Union, while at the same time actively engage in encouraging opportunities in building cultural bridges and mutual understanding.

Referring to the current economic situation of Cyprus, the President said that it is one of renewed opportunity and good prospects, pointing out that the primary objective of our economic policy is to see a continuation of the recovery and growth of the economy.
President Anastasiades expressed confidence that Cyprus can be one of the fastest growing economies in the EU, on the condition that we remain firmly on a path of prudent economic policy and we avoid the mistakes of the past.

On the Cyprus problem the President said that Turkey’s most recent illegal actions in our maritime zones amount to escalated provocations and to flagrant violation of our sovereign rights to explore and exploit our natural resources and do not create the necessary conditions for resuming negotiations.

He added that if Turkey’s illegal actions cease as well as the unacceptable positions and demands put forward by the Turkish Cypriot side, he is ready to immediately engage in a new dialogue as regards the internal aspects of the Cyprus problem and also to take part in a new Conference on Cyprus, provided that the necessary preparation has taken place and that the five permanent members of the Security Council and the EU will assume an active role.