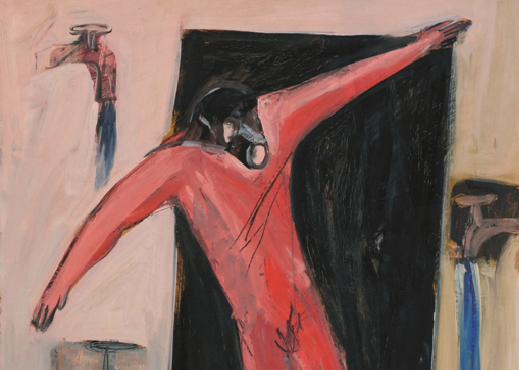 Gallery Blue Iris presents the online exhibition titled: “Asphyxia – The Masks of Rinos Stefani” which will last from 27 April – 27 May 2020.

Stefani’s work features human figures with masks from as early as 2001.

The ecumenical quality in Rinos Stefani’s art derives from the continuous exploration and negotiation of the human condition: of existential and ecological anxieties and dead-ends. All of these are manifested in a mood of ambivalence, comical as much as tragic, with a sense of humor, sympathy or caustic critique, as well as in a prevalent sensuality.

His work is characterized by consistent expressionism, manifesting itself in the freedom, both in the application of paint on the picture’s surface and of the design, as well as, in the seemingly naïve quality of the portrayed subjects. This last element betrays influences from various areas in international representational painting: from European Art Brut to German neo-expressionism, as well as from Italian Transavanguardia combined with references to “primitive” art. In Stefani’s work, the naked human figure becomes the symbol and the bearer of the (pan)human condition.

Among his pictures, a lone figure stands out (the artist’s alter ego?) as an acrobat, a wayfarer or a dancer “dressed” only with a gas mask.

Man anxious about man, in terror of man. The figure of the dancer appears prominent in Stefani’s painting. A figure dancing the zeimbekiko, an anthropomorphic bird with half-opened wings, an allusion to crucifixion; Images of a world that is at once familiar and strange or estranged. Like scenes from a play of the theatre of the absurd. Images that refer to the primordial, the primitive, the essential.