A concert with works by Cypriot composer Faidros Kavallaris under the general title OF TRANSCEDENCE is being organized by the French Institute of Cyprus, in the context of the French Presidency of the European Union.

The works will be performed by special guest exceptional French violin soloist Saskia Lethiec and the Cyprus based string quartet Fusionia made up of Marios Ioannou – violin, Savvas Lagou –violin, Sorin Alexandru Horlea – viola and Roberrt Grod – violoncello. The programme consists of six works covering a long period of the composer’s creative endeavours. Included is the work «TRANSCENDENCE – Early Morning Song» for solo violin (1984) and «TRANSCENDENCE β’» for two violins and violoncello (1988-89) that are being dedicated to the memory of the composer’s father and mother respectively.

Together «KYPRIAKÓ – of Transcendence» for violin, viola, violoncello and simantra (2002/2010). In the concert two works will receive their world premiere performance, «ARCHAÏKÓ – Indokypriakó» for solo violin (2016-2017) and the recently composed «PSYCHÍLATON» for violin and string quartet (2022). 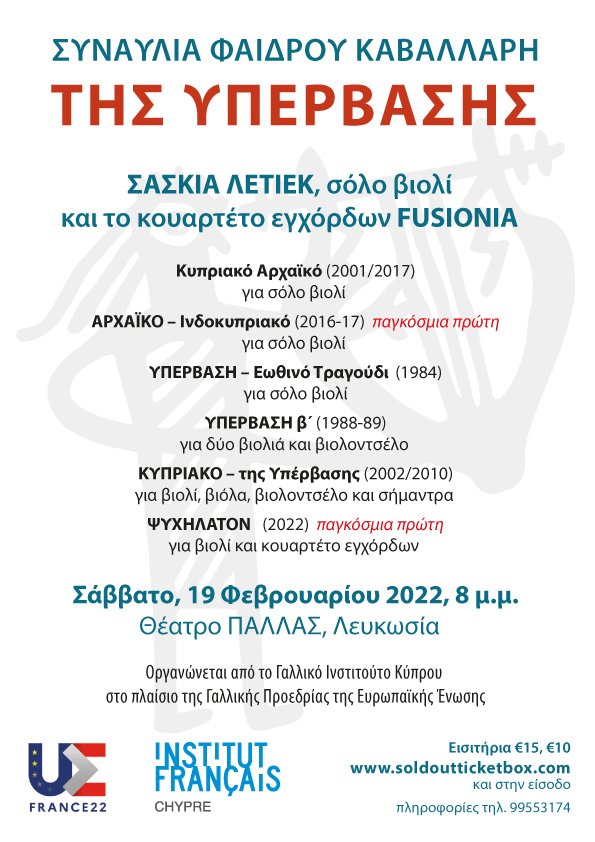 Cypriot musician, composer, musicologist, conductor and performer in concerts of his own music, with 50 years of musical presence and concert presentations.

He was born in Lapithos, Cyprus, in 1950 and there he grew up. He was a member of the wind band of the Gymnasium of Lapithos and later on of the Music Band of the National Guard playing the clarinet.

He studied architecture in London beginning in parallel to study and explore music in many countries and different continents. He holds Diplome de Composition from the École Normal de Musique in Paris (1992) and the title of Doctor of Musical Arts from Columbia University in New Work (1997). He has carried out music research in India (1984-85), in China (1987-90) and Japan (1990-91 and 2010-2011). He is strongly influenced by his native musical traditions, with particular interest in Ancient Drama and Ancient Greek Music.

He taught and gave special lectures in symposia, at universities and music schools both in Cyprus and abroad: about ther music of Cyprus, contemporary music (Jani Christou and Yiannis Xenakis) and the cultures of the East. He has also served as a professor at the Federal University of Bahia in Brazil (200-01) teaching composition and studies in ethnomusicology.

Beginning from his teenage years, essentially self-taught, to date he has compose works for voice (most prominent are the song-cycles on poetry by Cypriot poets concerning the 1974 drama of Cyprus), works for solo instruments, for small and big music ensembles (some of them for traditional Cypriot, Chinese and Japanese instruments) as well as music for film, dance and theatre. His list of compositions, that generally are influenced by all his studies and experiences, numbers more than 55 titles with some of them including a number of independent pieces.

He has collaborated with distinguished musicians like Rohan de Saram, Pierre-Yves Artaud, Cyprien Katsaris and Sygeyasu Shiba among others in various countries.

Faidros Kavallaris has compositely presented his music in many concerts, mostly under his own direction, both in Cyprus and abroad (in England 1973-80, in China 1989 and 2011, in Japan 1991, in Italy 1997), probably most important being the presentation of «APHRODITE KYPROGENIA – a musical praxis on the poetry of Sappho» at Aphrodite’s ancient temple at Palaipafos in Cyprus and with two further performances in Paris (UNESCO Grande Salle and Saint Cloud Park) in September 2008. In April 2021 he has presented in Cyprus the world premiere of the work «EXOCHRONO OF SAPPHO or the of the Universe». It is noted that his 1989 concert in Beijing was the first ever concert in China by a foreign composer.

Quite a few of his works have also been selected and presented in other concerts and at international contemporary music festivals in Cyprus, Greece and other European countries like England, Germany (Darmstadt 1984 and 1992), Hungary, France, Italy, Holland, Bulgaria, Ukraine, Sweden and Russia, in Mexico (World Music Days-1993 and Manuel Enriquez Festival-1998) in the United States (Columbia composers concerts 1994-5-6) and the Far East including China, Japan, Thailand, the Philippines and Korea (mostly at the Asian Composers League Festival in 1995, 1997 and 2002).

He has already published some of his works on CD: «KYPRIAKA EROTIKA – 15 traditional songs of Cyprus», a double album with Cypriot guitarist Dimitris Regginos on the solo guitar compositions and himself singing the traditional “phonés” (a set of two CDs with trilingual booklet in Greek, Turkish and English), and «FAIDROS KAVALLARIS CONCERTS volumes 1-6, 1989-2003», live recordings of concerts in China, Japan and Cyprus (7 CDs of 7 hours and 40 minutes containing 37 works). Some of his music is also available in print mainly published by himself, most recently the works «ANAKYKLIA» for solist and 22 musicians and «EXOCHRONO OF SAPPHO or the of the Universe» – a musico-poetic journey for daring and venturesome musicians (Nicosia, 2019), and the trio «OF LAPITHOS – Three Songs» (Nicosia, 2021). He has also published the book «ECHOS and ETHOS – Publications, Interviews, Letters» (Nicosia, 2014).

Saskia Lethiec is a distinguished French violin soloist with a lot of experience both as a soloist and as a chamber music performer. She was trained at the Geneva Conservatory (class of J.P. Wallez), at the Conservatoire National Supérieur de Musique et de Dance de Paris (class of G. Poulet and C. Ivaldi) and at the Hochschule in Cologne (class of M. Martin). In addition she has followed many master classes with Walter Levin, Hatto Beyerle, Miriam Fried and Maurice Hasson.She is the winner of the Ferras–Barbizet International Competition, finalist at the Enesco Competition in Bucarest and semi-finalist at the Kreisler International Competition in Vienna.She collaborates with many orchestras appearing as a soloist, like Orchestre Consentus Hungaricus of Budapest, the Brixix Orchestra of Prague, the Symphony Orchestra and Simon Bolivar of Caracas, the PACA Orchestra of Cannes, the North Orchestra of Portugal and the Chamber Orchestra of Toulouse.In chamber music and in different formations she has been invited to play in many festivals, among them the Amati Festival in Holland, the Amadeus Festival in Switzerland, Festival of Dubrovnik, Festival Pablo Casals de Prades, Festival Pro Quartett, Festival de Porto Rico, Festival des Arcs. In addition she has appeared in many prestigious venues like Musée d’ Orsay and L’ Hôtel de Invalides in Paris, Concertgebouw in Amsterdam, Victoria Hall in Geneva, Tonhalle in Zurich, Rodofphinum in Prague etc.

She is a founding member of the Hoboken trio, active since 2003. In 2016 she established a duo with pianist Jérôme Granjon with whom she recorded many CDs and played in many festivals in Europe, South America and Asia. Besides, she collaborates with organist Jean Baptiste Robin and herself gives solo violin recitals.In 2018 Saskia Lethiec founded the Lugha string quartet with which she will play all the Haydn and Mozart quartets in Paris over a period of five years.

de Paris. Since 2003 she is the co-director of the Musique d’ Un Siècle Festival in Dieulefit which is involved with the diffusion of contemporary music.

As the name implies it has as its main goal to create connections between different musical genres and styles in mixed and various concerts, as well as recordings and performances of all sorts, including experimental and pedagogical enterprises where the general public can be attracted to listening and be involved in a wider range of music, with classical repertoire remaining the main attraction.

The ensemble has already performed in the most prestigious venues in Cyprus and has participated in important cultural events including the Kypria International Festival. It has also collaborated with important artistic personalities.

Besides, Fusionia Quartet has already accomplished their own original arrangements of music like the “Cypriot” and “Ipirotiko” suites, with many such other projects in line to follow.