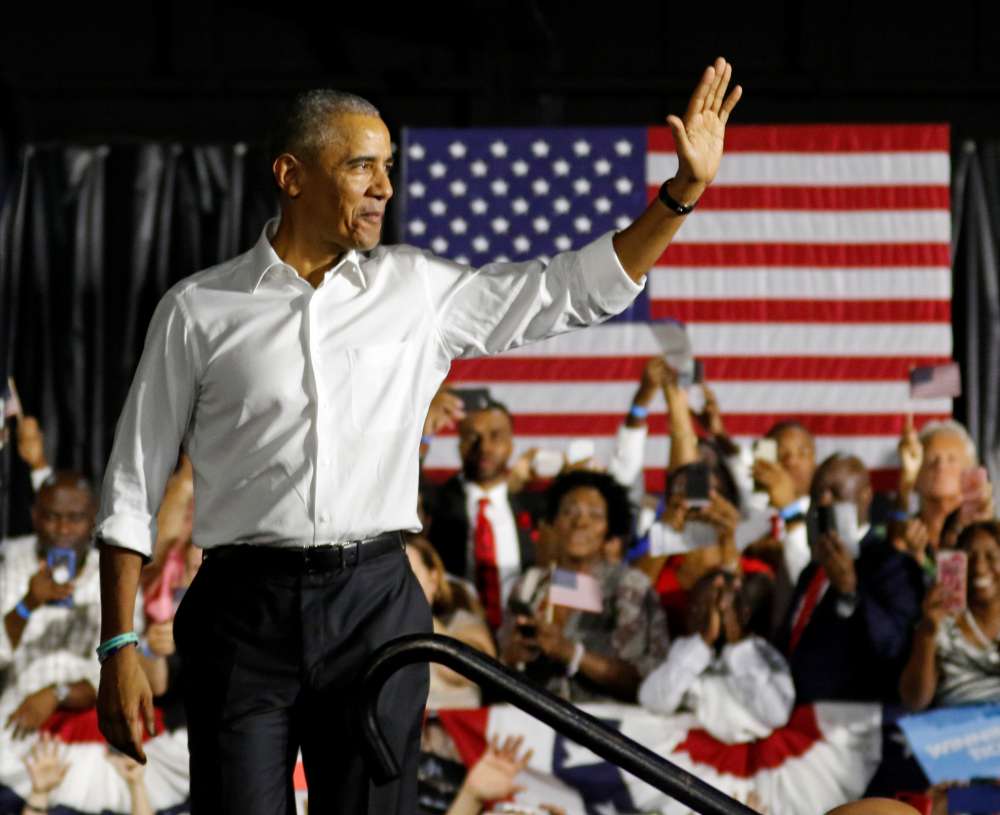 Former U.S. President Barack Obama warned on Friday against rhetoric he said was meant to sow fear as he campaigned in support of Democratic candidates while President Donald Trump hammered a hardline anti-immigration message to energize Republicans.

In a packed day of campaigning ahead of Tuesday’s congressional midterm elections, Trump continued a blitz of rallies urging voters to keep his Republican Party in control of Congress, while Democrats appeared to notch a win in their efforts to halt the spread of misinformation online.

Twitter Inc said it had deleted more than 10,000 automated accounts posting messages that discouraged people from voting in Tuesday’s elections and wrongly appeared to be from Democrats, after the party flagged the misleading tweets to the social media company.

The removals took place in late September and early October.

Obama hit on a common theme of Democratic campaigns – defending his signature 2010 healthcare law, while urging Americans not to embrace hostility and division in politics.

“We have seen repeated attempts to divide us with rhetoric designed to make us angry and make us fearful,” Obama said in Miami. “But in four days, Florida, you can be a check on that kind of behavior.”

Obama was flanked by gubernatorial candidate Andrew Gillum, who faces former congressman and strong Trump backer Ron DeSantis, and Senator Bill Nelson, who is being challenged by the outgoing governor, Rick Scott.

Speaking on behalf of Mike Braun, who is trying to replace Joe Donnelly in the Senate, Trump told a rally in Indianapolis:

Trump was joined on stage by former Indiana University basketball coach Bobby Knight, who led the crowd in a cheer “Go get’em Donald.”

Opinion polls and non-partisan forecasters generally show Democrats with strong chances of winning 23 additional seats and taking a majority in the House of Representatives, which they could use to launch investigations into Trump’s administration and block his legislative agenda.

Republicans are favored to retain control of the Senate, whose powers include confirming Trump’s nominations to lifetime seats on the Supreme Court.

Obama’s speech was repeatedly interrupted by hecklers, prompting him to quip: “Why is it that the folks who won the last election are so mad all the time?”

Interest in the election has been unusually high in a year when Congress but not the White House is at stake, according to early voting tallies. Twenty-seven states plus the District of Columbia have recorded more early votes at this point in the campaign than they did in all of 2014, according to The Election Project at the University of Florida, which tracks turnout.

Texas had already recorded more votes than it did in all of 2014, including Election Day, the group said.

After Miami, Obama was headed to Georgia to campaign for Stacey Abrams, a former state legislator aiming to become the nation’s first black female governor.

That race pitting Abrams against Republican Brian Kemp, the state’s top elections overseer, has become a flashpoint for allegations of voter suppression by Democrats due to the state’s strict voter-identification law. Republicans say the law is necessary to deter voter fraud.

A federal judge on Friday ordered the state to allow some 3,000 recently naturalized citizens to vote after their registrations had been put on hold.

With the race neck and neck, voter turnout will be crucial, said Georgia State University political scientist Lakeyta Bonnette-Bailey. Obama could energize Democratic voters and drive up turnout, she added.

“At this point it’s going to be turnout,” she said. “How can he mobilize those who are already registered to vote to go out and vote. And to tell their friends and families to vote.”

The final weeks of the campaign have also seen a spate of violence including the massacre of 11 people at a Pennsylvania synagogue and more than a dozen package bombs sent to prominent Trump critics.

The FBI said on Friday it had recovered a suspicious package addressed to California billionaire Tom Steyer, a Democrat known for his ads calling for Trump’s impeachment.

In West Virginia, Trump’s third visit in three months was aimed at shoring up Patrick Morrisey, who is seeking to unseat Democratic Senator Joe Manchin.

“I know Trump coming so often is making an impact,” said Jim Hoyt, chairman of the Morgan County Democratic Party in northeast West Virginia. Like other Democrats in the state, he still expects Manchin to win.