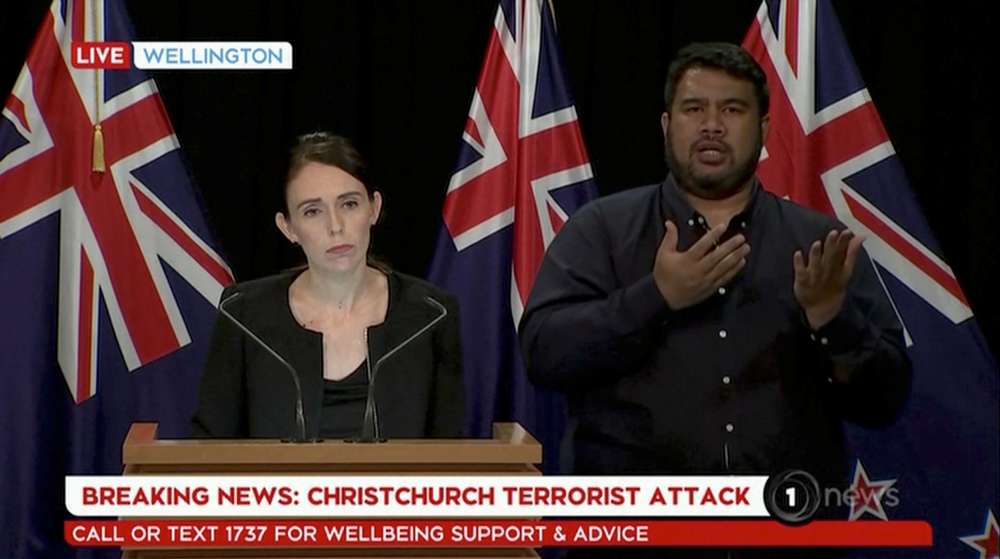 The calm and compassion shown by New Zealand Prime Minister Jacinda Ardern in response to the killing of 50 Muslims by a suspected white supremacist has burnished the credentials of a leader whose youth and celebrity had given critics’ doubts.

In the hours after the carnage in Christchurch on Friday left New Zealanders reeling, the 38-year-old Ardern struck all the right notes.

She promptly labelled the worst peacetime mass killing in New Zealand as terrorism, and set about reassuring a nation that has been largely unscathed by the violence and fears that have afflicted other countries in the past two decades.

A day after the attack, Ardern led a multi-party group to visit grieving families and Muslim community members.

Wearing a black head scarf, she hugged relatives and let them set the pace and agenda as she listened and offered comfort.

“The prime minister, when she came wearing her scarf, that was big for us,” said Dalia Mohamed, who was mourning Hussein Mustafa, the father-in-law of her daughter and a volunteer at the Al Noor mosque where more than 40 people died.

Ardern also promptly made tightening gun laws, which may prove politically difficult, a priority for her government.

“Ardern’s performance has been extraordinary – and I believe she will be strongly lauded for it both domestically and internationally,” said political commentator Bryce Edwards of Victoria University in Wellington.

Ardern’s pregnancy, maternity leave and the birth of her daughter while in office also set her apart, with many people seeing it as symbolising progress for women in leadership roles.

Pakistan’s Benazir Bhutto, in 1990, is the only other government leader to have given birth in office.

Appearing on U.S. talk shows and taking her infant daughter onto the floor of the United Nations last year boosted her popularity.

But there were nagging doubts about whether her celebrity masked a lack of substance or steel.

And as Ardern completed one year in office in October, political commentators credited her with moving the politics of government to the left. But they also noted that little had been accomplished, and called out Ardern for pulling her punches and making slow progress.

They also criticised her handling of the economy as business confidence has sunk to its lowest in a decade after she restricted foreign property ownership and hiked minimum wages.

Her government has also faced massive strikes by primary school teachers, nurses and bus drivers demanding wage hikes, with no solution in sight.

But the tragedy of Christchurch gave Ardern an opportunity to tell New Zealanders what their country stands for, to dismiss any sense of self-doubt.

She said the attack had not happened because their country was a safe harbour for hate, or racism or extremism.

“We were chosen for the very fact that we are none of those things,” she said in a national address during which her voice cracked with emotion at times.

“Because we represent diversity, kindness, compassion. A home for those who share our values. Refuge for those who needs it. And those values will not and cannot be shaken by this attack,” she said.

“You may have chosen us – we utterly reject and condemn you.”

And there was what some have seen as a polite rebuke of U.S. President Donald Trump, who said he did not see a rise in white nationalism although it may have been an issue in New Zealand.

Ardern said Trump had called to offer his condolences and asked what support the United States could offer New Zealand.

“My message was: ‘Sympathy and love for all Muslim communities,” she said adding she thought it was the sentiment that existed in the country.

“Can we just acknowledge with open hearts and clear heads that @jacindaardern has done an extraordinary job representing our nation, our pain and our resolve,” prominent journalist and television news presenter Eric Young said in a Twitter post.

“I wish with everything in my heart she hadn’t had to, but I am proud that she did.”

By In Cyprus
Previous articleLast supermoon of 2019 on March 20
Next articleUnder pressure, May scrambles to win support for Brexit deal