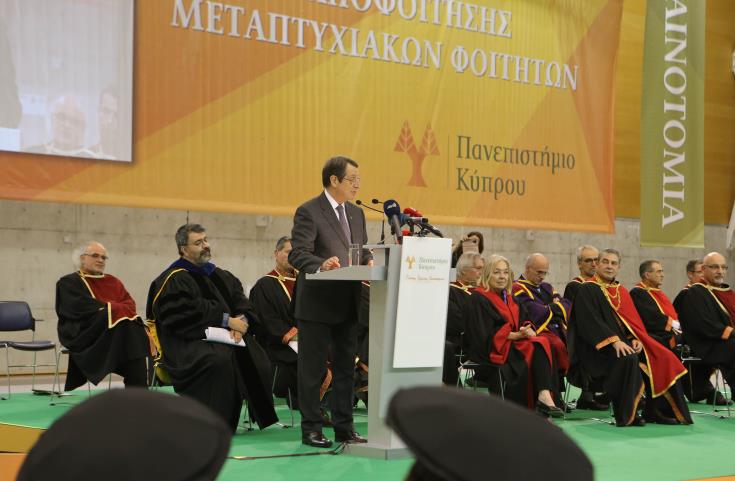 Addressing a graduation ceremony of postgraduate students at the University of Cyprus, the President said that according to official statistical data, from a total of 32,000 students in Cyprus’ higher education institutes during the academic year 2012-2013, 8,000 of them were citizens of other EU member states or came from third countries.

During the academic year 2017-2018 the total number of students rose to 48,000 students, with 24,000 of them originating from EU and third countries, the President went on.

He said moreover, that according to data from the Ministry of Education, there seems to be an increase in these numbers for the academic year 2018-2019. “The total number of students reaches 51,000 , of which 27,000 come from European and third countries” he noted.

The President also stressed that according to European Commission reports, Cyprus has the second highest rate when it comes to completing higher education studies in the EU, with 57.1%, compared to the EU average of 40.7%.

“This fact is indicative of the quality and high level of our students and graduates, as well as of our academic institutions and the education they offer” he noted.

The President of Cyprus said finally that the state acknowledges the importance of the University of Cyprus as an educational and cultural institution, and takes note of the significant work that is being produced there.

Since its foundation, the University of Cyprus, appropriately staffed with academic and administrative staff, focuses on quality, on being extrovert, on research and innovation, and seeks to maximize its scientific work, while pursuing excellence, he added.