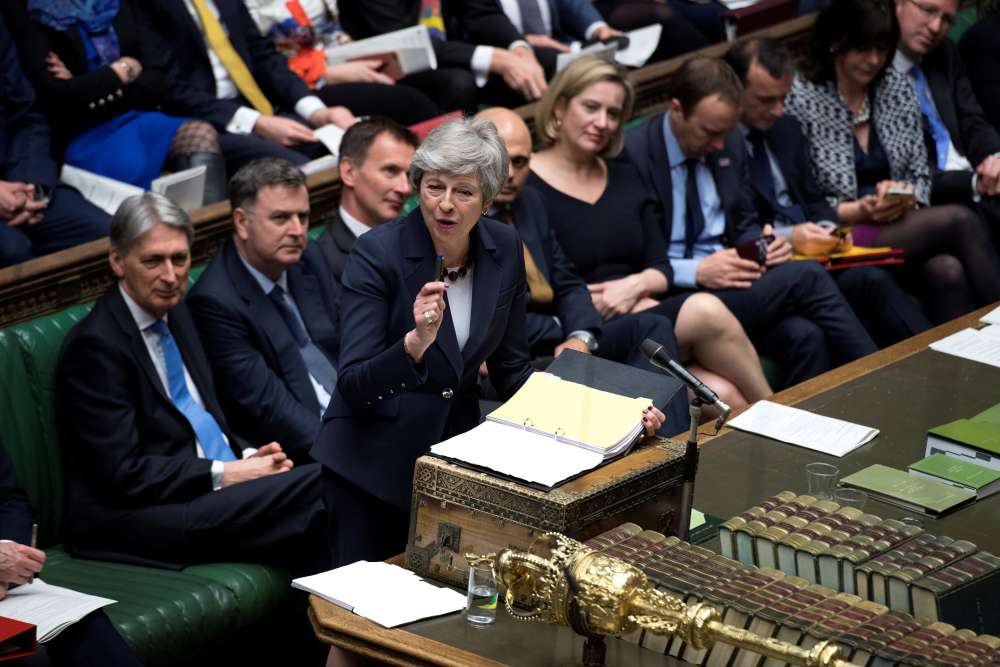 If 10 members of parliament from Northern Ireland scupper British Prime Minister Theresa May’s two-year quest for a European Union divorce deal, few in the troubled region will be surprised.

After the Democratic Unionist Party (DUP) announced on Wednesday it could not support May’s deal, suggestions that the party best known for the 1980s slogan “Ulster says No” could be won over were met with scorn by some commentators and former party officials.

Signs of the deadlock were clear, they said, in a stream of pronouncements over two years, and in the party’s uncompromising history.

“People always underestimate the determination, the belligerence, the militancy of the DUP. They don’t fold,” said Jon Tonge, co-author of a book on the DUP and politics professor at the University of Liverpool. “I think the chances are very remote.”

When leader Arlene Foster on Wednesday dropped her bombshell that the DUP would not support May’s deal, she reminded her interviewer that her party’s position had not changed in the past 15 months: it would not countenance the possibility of regulatory divergence between Northern Ireland and the rest of the United Kingdom.

“We warned her, but she went ahead,” said Foster, who last year described her party’s red lines as “blood red.”

Some commentators have suggested a deal might be done with a domestic gesture, like additional funding for Northern Ireland. Others are sceptical.

“This is not the kind of issue that could be traded for money,” Richard Bullick, an advisor to Foster until 2017 and one-time head of policy for the DUP, told Reuters.

The party would not accept the backstop – the troublesome insurance mechanism aimed at keeping Northern Ireland’s border with EU-member Ireland open after Brexit – unless it had a cast-iron “treaty-level” guarantee that it would not lead to Northern Ireland being treated differently from the rest of the United Kingdom.

“The DUP are pretty good at actually saying what they’re going to do and then doing it,” Bullick said. “There’s much less mystery to all of this than meets the eye.”

May no longer has much to offer. While the DUP are demanding the scrapping or changing of the backstop, the European Union has made clear it will not reopen the divorce deal in which it is enshrined.

The prospect of May pledging to maintain regulatory alignment has raised concerns among DUP members about whether a future Conservative Party leader might renege on that to liberate Britain from EU regulations.

The DUP was founded in 1971 at the start of Northern Ireland’s three-decades-long “Troubles”. More than 3,600 people died in fighting between Irish nationalists seeking a united Ireland, the British army and loyalists seeking to maintain the province’s status as British.

Maintaining the union is the DUP’s “raison d’etre,” former Irish prime minister Bertie Ahern said. “Anything that weakens the union, (that) might lead to a united Ireland ultimately is something they can’t be part of,” he told Ireland’s RTE radio.

Some observers wonder how much the DUP has to lose by walking away.

It is enjoying a once-in-a-generation chance to hold the balance of power in parliament in London, where it has propped up May’s minority government, and could face the prospect of opposition leader and united Ireland sympathiser Jeremy Corbyn becoming prime minister if the Brexit chaos leads to an election.

But rejecting the deal would not automatically bring about an election and a vote could easily bring another hung parliament in which the DUP could hope to roughly maintain its seats.

Some see a more likely outcome as the DUP pivoting to a softer Brexit, without creating regulatory divergence, something Foster refused to rule out on Thursday.

“The DUP are hard anti-backstoppers, but they are not hard Brexiteers,” said Tonge.