No chumminess between Trump, former presidents at George Bush funeral 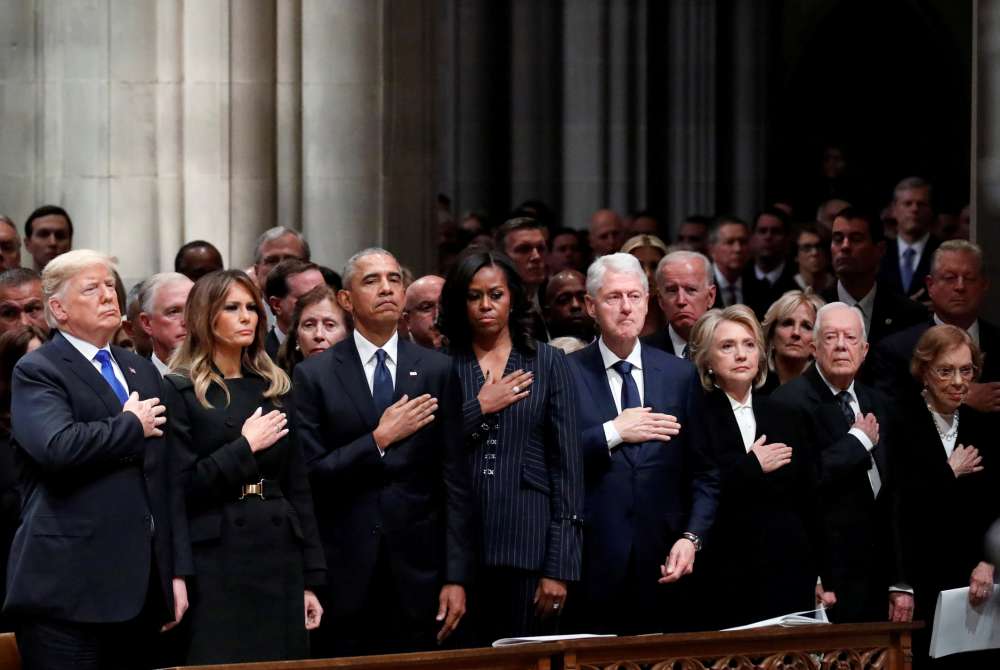 President Donald Trump joined the group of living ex-U.S. presidents on Wednesday to commemorate the life of former President George H. W. Bush, but in a service characterized by emotion and good feeling, warmth between the current and former occupants of the White House was decidedly absent.

Trump shook hands awkwardly with his predecessor, Barack Obama, and former first lady Michelle Obama as he took his place in the front row of the service at the Washington National Cathedral.

He did not reach out to former President Bill Clinton or former Secretary of State Hillary Clinton, who were seated next to the Obamas. Hillary Clinton, who lost to Trump in the 2016 presidential election, nodded but did not smile as the one-time New York businessman and his wife, Melania, joined the group that included former President Jimmy Carter and his wife, Rosalynn.

Trump then proceeded to sit through the service, often with his arms folded over his chest and his eyes fixed in an intense stare ahead.

The fact that he came, however, and was welcomed by the Bush family, with whom he also has sparred, provided a glimpse of bipartisanship and political civility that many feel are lacking since Trump took office in January 2017.

The president did not attend a service that was similar in scale at the cathedral for Republican Senator John McCain, who died earlier this year, and had to be talked into keeping the American flag at half-staff over the White House.

Trump and McCain had feuded repeatedly and at his service, the senator’s daughter Meghan McCain rebuked Trump in an emotional speech.

For Bush, Trump declared a day of mourning. He visited the 41st president’s casket as it lay in state in the U.S. Capitol and later called on former President George W. Bush and his wife, Laura, while they were in Washington.

Still, the bad feeling between Trump and his predecessors appeared hard to set aside.

Trump has sharply criticised Obama and worked to roll back signature achievements of the Democrat’s White House tenure on healthcare, climate change and foreign policy.

Michelle Obama, who recently published a memoir, wrote about not being able to forgive Trump for his leading role in the “birther” movement that questioned whether her husband was born in the United States. Barack Obama was born in Hawaii.

Trump’s behaviour contrasted with that of his presidential counterparts. The Clintons chatted amiably with the Obamas before the current president arrived. The two former first ladies exchanged a long hug on seeing each other and clasped hands at the end of the service when they parted.

George W. Bush shook hands with the full front row of presidents and their spouses, and in a replay of a scene that went viral during McCain’s funeral, handed something to Michelle Obama, presumably candy.

The 43rd president, in his eulogy, also hailed his father’s friendship with Bill Clinton, who vanquished the elder Bush in the 1992 election. That kind of friendship is unlikely, at least for now, to materialise with the 45th president.

Former Canadian Prime Minister Brian Mulroney, a longtime friend of the late Bush, spoke at the ceremony and said when he was president, “every single head of government in the world knew that they were dealing with a gentleman, a genuine leader, one who was distinguished, resolute and brave.”

By In Cyprus
Previous articleCyprus FM contacts Russian counterpart, agree to meet
Next articleMay says: It’s my deal, no deal or no Brexit at all