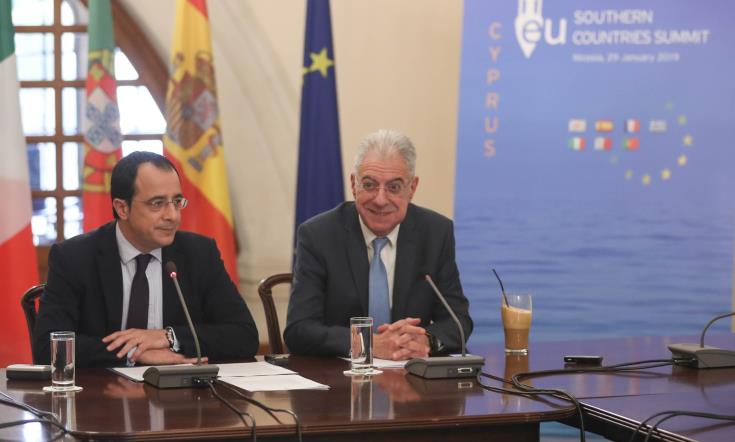 Spain will be represented at the Summit by Foreign Minister Josep Borrell, as its Prime Minister will be on a visit to Mexico. Borrell will also hold discussions with Foreign Minister Nikos Christodoulides on January 30.

Speaking during a press conference on Wednesday, Foreign Minister Christodoulides underlined the particular importance of the Summit, adding that discussions will focus on issues which concern the EU. He noted that a Joint Declaration is expected to be adopted at the end of the Summit, outlining the positions of the seven countries as regards the issues discussed.

Christodoulides also described Anastasiades’ bilateral meetings with Costa, Macron and Conte as very important, adding that a lot of issues of mutual interest are expected to be discussed.

“We are holding contacts with a view to expand the cooperation of the two countries (France and Italy) within the Republic of Cyprus’ EEZ and this will surely be one of the issues discussed during the bilateral meetings which Anastasiades will have with Macron and Conte.” he said.

The EastMed issue will also be discussed during Anastasiades meeting with Conte.

Referring to the issue of Europe`s energy security, Christodoulides said that it is pivotal, adding that the seven countries will discuss how the EU can through certain actions enhance its energy autonomy and independence.

As regards the EU-League of Arab States Summit, he said that the Republic of Cyprus has for a long time supported the need for this Summit to tale place and considers that the seven Mediterranean EU countries, which neighbour the Arab world, have a particular role to play towards this direction.

With regard to Anastasiades meeting with Macron he noted that in the framework of the visit which the Foreign Minister of France Jean-Yves Le Drian paid to Cyprus in September, Cyprus and France agreed to begin discussions with a view to conclude certain bilateral agreements on energy, defence, security and other issues.

He went on to say that Anastasiades and Macron will review the progress achieved so far, and will decide whether any announcements will be made.

If not now, the announcements will be made in the next period, Christodoulides noted. According to information, Nicosia wants the announcements to be made after bilateral talks in Paris, expected to take place before the end of March.

Responding to a question about Brexit, the Foreign Minister recalled that the EU27 have a common approach on this issue.

“We are following developments in Britain very closely. The issue is continuously being discussed at the European level and it is very important that the EU27 have a common approach on it,” Christodoulides stressed.

To another question about the different approach of France and Italy as regards the migration issue, Christodoulides said that migration has a bigger impact on the EU Mediterranean countries than on the other EU member states, and the aim of the discussion that will take place is to outline very concrete suggestions and positions. The goal, which I believe is perfectly feasible, is to for the seven countries to have a common approach, he stressed.

With regard to the Cyprus issue, Christodoulides said that President Anastasiades will inform other participants about the current state of affairs and will stress the need for a more active EU involvement in efforts for a settlement.

“We consider that there can be a greater involvement. We think that the EU can offer solutions to all issues in which there are disagreements and the issues due to which the Crans-Montana Conference reached a deadline,” he noted.

He said that these issues include the matter of security and guarantees as well as the functionality of a settlement, adding that the EU itself is interested in not having a member sate that will create problems and difficulties in the decision making process.

By In Cyprus
Previous articleUpdated: UK settles legal claims by EOKA veterans; to pay £1 million in damages
Next articleOEB could propose postponement of NHS contributions