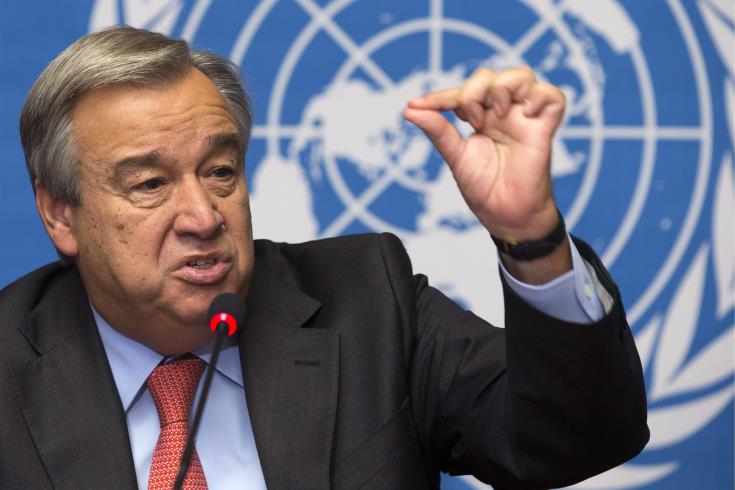 Nicosia looks forward to Friday’s meeting between President Nicos Anastasiades and the Secretary-General Antonio Guterres at the UN headquarters in New York in a bid to learn more about the UN Chief’s intentions regarding his next moves on the Cyprus issue.

A government source said that Guterres will probably call a trilateral meeting in October with the two sides in Cyprus, while a new visit by UN envoy Jane Holl Lute should not be expected, following her efforts earlier this month to finalize the terms of reference.

The President of Cyprus was briefed about Thursday’s meeting between Guterres and the Greek Premier Kyriakos Mitsotakis. CNA has learned that the Secretary-General is in favour of proper preparation, an agreement on the terms of reference and of a framework on the process.

“I can’t go to a conference again like I did last time” Guterres seems to have told the Greek PM, referring to the 2017 Conference on Cyprus, in the Swiss resort of Crans-Montana. “We need to make sure that there are going to be substantial negotiations,” the UN Chief added, according to CNA sources.

The same source also referred to Wednesday’s meeting between Mitsotakis and Turkish President Erdogan, saying that there was no extensive reference to Cyprus. In the meeting, President Erdogan alleged that the Greek Cypriot side tries to “steal” from the Turkish Cypriots their share from hydrocarbon resources, with Premier Mitsotakis pointing to the convergences that have been agreed on these matters, while referring to a relevant proposal made by President Anastasiades.

President Erdogan, the sources said, also pointed out that we need to see what type of settlement we are looking for, with Premier Mitsotakis replying that Athens and Nicosia support and remain loyal to UN resolutions, while underlining the need to focus on UN efforts.

On the sidelines of the 74th session of the UN General Assembly, President Anastasiades also met with Russian Foreign Minister Sergey Lavrov, calling on Moscow to exert its influence on Ankara.

According to a government source, the two sides took stock of bilateral relations, while President Anastasiades noted that Ankara hampers efforts to agree on the terms of reference that will pave the way for the resumption of settlement talks.

The same source said that Lavrov was fully aware of the situation and told President Anastasiades that Moscow retains its position, favoring a solution on the basis of UN resolutions.

Furthermore, Lavrov expressed the view that sanctions do not have the impact Nicosia anticipates, as was the case with the sanctions against Russia.

On Famagusta, the Foreign Minister of Russia said that he was aware about the issue and asked for the relevant resolutions to be respected. He called moreover for careful steps to be taken, while noting the need for proper preparation. He reiterated finally Russia’s positions regarding the United States.

On Thursday, the President of Cyprus also had a short conversation with Guterres, during a welcome ceremony before delivering his address at the UN General Assembly.

According to a government source, President Anastasiades told Guterres that “we ought to continue” with the efforts on Cyprus, while expressing support to the efforts of the Secretary-General. During the brief exchange, Guteres replied that he always remains optimistic.

Cyprus has been divided since 1974, when Turkish troops invaded and occupied 37% of its territory. Turkey has ignored numerous UN resolutions calling for the withdrawal of the Turkish troops and respect of the integrity and sovereignty of the Republic of Cyprus.