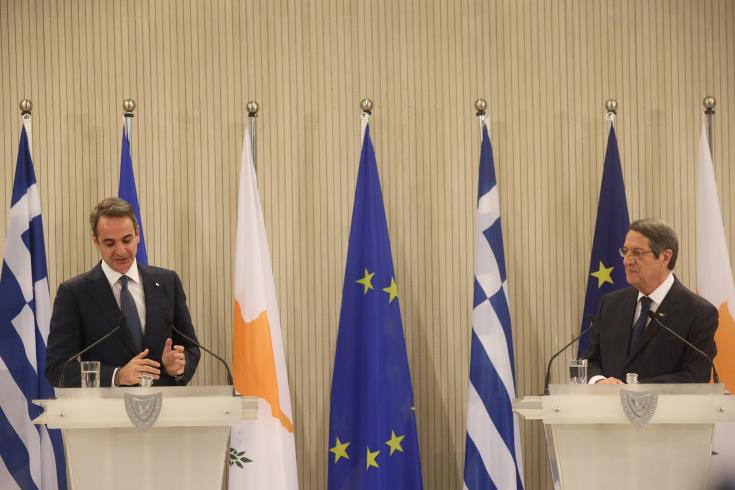 Nicosia and Athens reiterated their readiness to attend an informal five-party conference on Cyprus, which the UN Secretary-General intends to convene soon, with the President of Cyprus, Nicos Anastasiades, and the Prime Minister of Greece, Kyriakos Mitsotakis, conveying on Monday their “clear position” that the form of settlement needs to be in line with UN resolutions.

In statements after their meeting, at the Presidential Palace, in Nicosia, President Anastasiades and Premier Mitsotakis said they were in favor of abolishing “anachronistic guarantees” and the withdrawal of Turkish troops from the island, while noting the agreed and binding framework for a Cyprus solution, UN resolutions provide for.

“While confirming our absolute readiness to attend the informal conference, which the Secretary General intends to convene, our position has been clear first and foremost with regards to the intended form of settlement” President Anastasiades said, while noting that the solution “can not deviate from the relevant resolutions and decisions by the UN, the Security Council, as well as from European principles and values.”

He also said that the settlement must provide for the termination of the anachronistic system of guarantees and the presence of Turkish occupation troops, while it needs to be functional, to avoid the possibility of a collapse.

The President also echoed a letter, sent by the UN Secretary General to the two leaders in Cyprus, on October 26, 2020, saying that “the solution needs to be based in the body of work achieved so far and convergences” among others.

Moreover, he referred to the coordination between Nicosia, Athens and other countries, ahead of EU Summits and an anticipated report by the EU High Representative, Josep Borrell, regarding EU-Turkey relations and the bloc’s options for which course to take.

The President expressed hope that the EU will display the solidarity required, supporting efforts for a Cyprus solution “through practical and active involvement” during a future dialogue concerning the essence of the Cyprus issue.

He also noted that “it is not our side who is attacking. We are those who seek peace and stability in the region” and expressed hope that the “positive agenda” also involves positive actions on behalf of neighboring Turkey.

Together with Prime Minster Mitsotakis, they also discussed regional developments in the Eastern Mediterranean and the Aegean, the President went on, thanking the Greek Premier for informing him about the exploratory talks, held between Greece and Turkey, on January 25.

Furthermore, he underlined their joint willingness to further enhance trilateral cooperation initiatives, which Cyprus and Greece promote with countries from the region and which, according to the President of Cyprus, prove once more that both countries comprise pillars of stability and peace.

“In this framework, we welcomed a regional meeting, taking place in the next days – and I wish not to elaborate – of countries from the region, Ministers from the region, which proves everything I said before” President Anastasiades noted.

On his part, the Prime Minister of Greece said that his visit is taking place during a “delicate juncture” for the future of the Cyprus issue and assured President Anastasiades that “the termination of Turkey’s occupation and reaching a comprehensive, viable, functioning and mutually acceptable settlement remains a top Greek foreign policy priority.”

“Both Athens and Nicosia, we remain committed to UN decisions” which according to the Greek Premier, is the only agreed and universally binding framework for a Cyprus solution, as well as the basis for implementing the EU acquis throughout the territory of Cyprus.

Kyriakos Mitsotakis also pointed to the recent adoption of Security Council resolution 2561, which, he said, makes reference to a bizonal bicommunal federation as the only viable settlement.

The same spirit is echoed in the body of work achieved through negotiations under the UN, as stipulated in the Secretary General’s communique, after a meeting with the Cyprus leaders in 2019, Mitsotakis said, adding that this effort “must be maintained.”

Unfortunately, he went on “the stance of Turkey and that of the head of the Turkish Cypriots is out of the UN framework – at least if someone listens to the public statements – by asserting the unfounded position for two states.” He said that the two-state solution is rejected by Greece and Cyprus, as well as by the UN and the EU.

“Therefore, Ankara and Mr. Tatar need to know that resuming a substantial dialogue is conceivable only within the existing and binding limits, as described,” Mitsotakis said.

The Prime Minister of Greece also referred to their joint position with Nicosia, concerning the abolition of the system of guarantees and said that “the full and rapid withdrawal of occupation troops is a prerequisite for reunification.”

As for the initiative of the UN Secretary General, Mitsotakis expressed Athens’ support, saying that “we will be present and in absolute sync during the informal five party conference which we expect and hope Guterres to convene very soon.”

The Greek Premier paid a one-day working visit to Nicosia, in order to coordinate action with the Cyprus President and exchange views ahead of the five-party conference. The two leaders had a tete-a-tete meeting at the Presidential Palace, followed by extensive deliberations between the two countries’ delegations. A working lunch was scheduled to follow suit, while Mitsotakis is expected to travel to Israel, where he is meeting with Premier Netanyahu.

Vaccinations were also among the topics discussed, with Mitsotakis saying that both Greece and Cyprus have the operational capacity to proceed with more inoculations, but are unable to do so because they lack vaccines. He expressed his certainty that the issue will be resolved in the next months and also referred to his proposal for an EU-wide COVID-19 vaccination certificate, to help boost tourism.