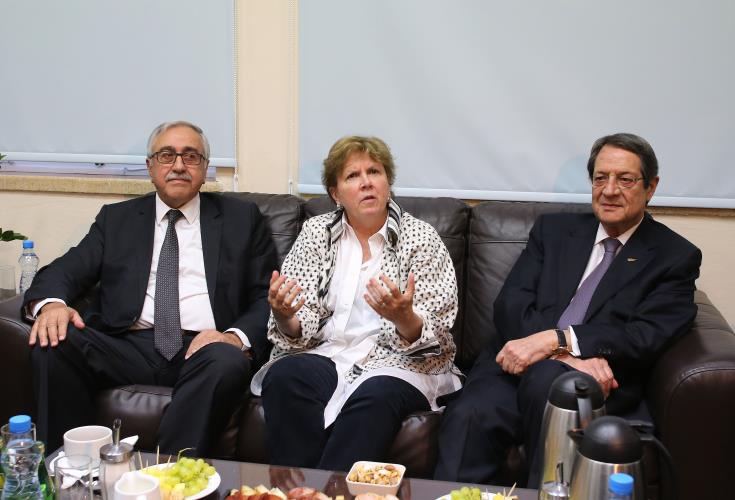 The next steps in the dialogue to solve the Cyprus problem are expected to be defined during the meetings the UNSG Antonio Guterres will have with the community leaders in New York at the end of the month. Guterres will have separate meetings with President Nicos Anastasiades and Turkish Cypriot leader Mustafa Akinci and he will decide if he will call a tripartite meeting to take place most probably beginning of October.

His envoy Jane Hall Lute concluded her one week mission on the island on Friday with an informal meeting with the leaders, one which was described as a social one but took place in order to send messages of hope for a dialogue that needs to stay alive. All sides reconfirmed their determination to continue the efforts.

All past week Lute had daily meetings with the leaders in a bid to secure the terms of reference that would lead to the resumption of the stalled talks. The terms were not finalized but Lute will brief the SG on her contacts with the leaders and will also meet with guarantor powers in New York to determine where they stand. SG Envoy is expected to tell Guterres that leaders have an understanding on three issues as these where confirmed during an informal meeting Anastasiades and Akinci had on August 9, namely the joint statement of February 11th, 2014, the six parameters of the Guterres framework as presented on June 30,2017 and the convergences that led to the Conference in Crans Montana.

Turkish FM Mevlut Cavusoglu is meeting on Monday with Akinci and the political leaders and his statements will reflect on the Turkish side’s stance at the moment.

By In Cyprus
Previous article4kg of cannabis found in the car of a 45-year-old man
Next articleIranian tanker Adrian Darya 1 photographed off Syrian port Tartus: U.S. satellite firm