Next Cyprus-Greece-Egypt trilateral Summit to be held in November 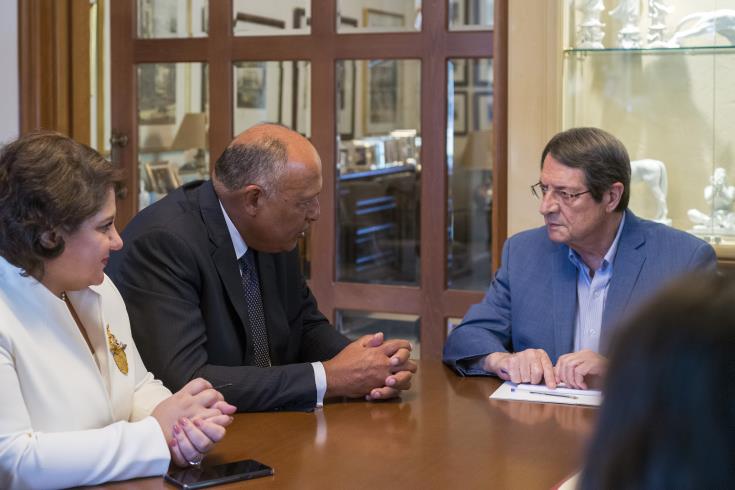 The next Cyprus-Greece-Egypt trilateral Summit will take place in November, in Egypt, Government Spokesman Prodromos Prodromou announced on Wednesday. Prodromou was speaking in Limassol, after a meeting between the President of Cyprus Nicos Anastasiades and the Egyptian Foreign Minister Sameh Hassan Shoukry.

Shoukry, accompanied by the Ambassador of Egypt to Cyprus, Mai Taha Khalil, arrived earlier in the afternoon at the President’s residence and had a 15-minute meeting with the President of Cyprus, in the presence of Foreign Minister Nikos Christodoulides and Prodromou.

In his statements, Prodromou said the meeting was positive and productive and Shoukry conveyed to President Anastasiades the wishes of his Egyptian counterpart, President Sisi, for a quick recovery. He also noted that President Anastasiades briefed the Egyptian FM about Turkey’s provocative actions in the region, while the two sides took stock of Cypriot-Egyptian relations and their trilateral cooperation with Greece.

The next Cyprus-Greece-Egypt trilateral Summit is probably taking place in November, Prodromou said and noted that during the meeting, the Egyptian side reiterated its support to the sovereign rights and the energy program of the Republic of Cyprus, while wishing that talks for a Cyprus settlement will resume.

The Spokesman also noted that Shoukry informed President Anastasiades about the progress of the energy forum, held at the initiative of Egypt, and talked about the next steps in the two countries’ cooperation.

Asked about the strengthening of cooperation between the two countries, Prodromou said that “trilateral cooperation continues, also based on the initiative of our Foreign Ministry for the creation of some sort of coordination secretariat, while all issues are being forwarded in an orderly and quiet manner.”

He added that the dynamic of this cooperation will be confirmed once more during the upcoming Summit which will probably take place in November, in Egypt, in line with a proposal accepted by the Cypriot side on Wednesday.

The Spokesman was also asked about the government’s response to provocations coming from the Turkish side, such as the issue of the fenced-off part of the city of Famagusta. Prodromou pointed to the President’s proposal, which has been eventually accepted, about a meeting between the Cyprus leaders and added that President Anastasiades is looking forward to the August 9 meeting with the Turkish Cypriot leader Mustafa Akinci, in the hope that there will be good will to discuss freely – as this is not a negotiation – all issues that need to be discussed and clarified, with the aim of resuming settlement talks.

At the same time, Prodromou said that with regard to Famagusta, there are concrete decisions by the United Nations. “This is not about refuting arguments and allegations” he said, hinting at statements from the Turkish side that properties within the fenced-off part of the city belong to EVKAF, a Muslim charitable institution, a claim which is dismissed by the government of Cyprus.

“Famagusta is at the top, it is the first priority of Confidence Building Measures, which have been recently proposed once more by the President of the Republic to the Turkish Cypriot leader” the Government Spokesman said.

He did not rule out the issue of CBMs to be on the agenda of talks between the two leaders on August 9, and reiterated that President Anastasiades seeks to resume talks from the point they were left off, along the lines of the United Nations framework. This means that we need to make use of the progress and convergences achieved, he went on, adding that this is not the time for divergencies. We need to confirm the convergencies reached and discuss the rest of the issues, that were codified in the six known parameters of the UN Secretary-General, Prodromou noted.

Asked about Thursday’s meeting in Limassol between President Anastasiades and Elisabeth Spehar, the Special Representative of the UN Secretary-General in Cyprus, Prodromou said that the UN official will inform the President about the discussion, at the Security Council, for the renewal of the mandate of the peacekeeping force (UNFICYP) and there will also be “some practical arrangements” concerning the August 9 meeting.