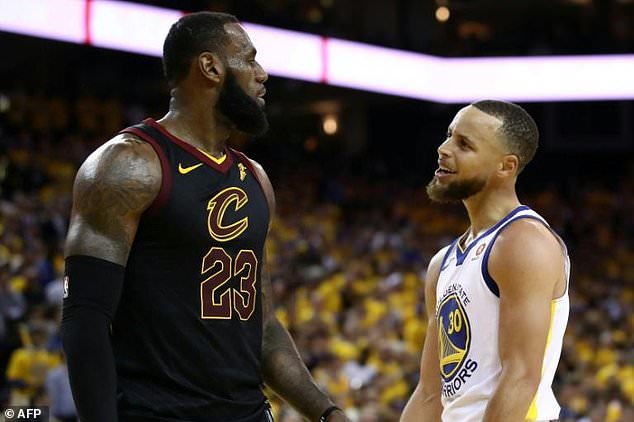 Klay Thompson hit a 3-pointer and Shaun Livingston followed with consecutive hoops, including a backbreaking dunk, as the Golden State survived a playoff-career-best, 51-point explosion from LeBron James and a scare late in regulation with an overtime push Thursday night that enabled them to beat the Cleveland Cavaliers 124-114 in Game 1 of the NBA Finals.

Game 2 in the best-of-seven series will be held Sunday night, also on the Warriors’ home court, where they have won 38 of their 44 playoff games in the Steve Kerr coaching era.

James hit 19 of his 32 shots in the first 50-point playoff game of his career. James’ 27th postseason contest of 40 or more points was also his 109th with 30 or more, tying Michael Jordan for the most in NBA history.

While the Cavaliers missed their first five shots of overtime, the Warriors ran off nine consecutive points. Two free throws by Kevin Durant began the run.

The outcome was never in doubt after Draymond Green bombed in a 3-pointer for a 119-109 lead with 1:36 remaining, but that didn’t prevent tempers from flaring with 2.6 seconds remaining. Tristan Thompson was ejected at that point, alleged to have swung his arm at Livingston.

The final minute of regulation featured a controversial video-review reversal after it appeared the Cavaliers had taken control of the game.

After a three-point play by James rallied Cleveland into a 106-104 lead with 50.8 seconds to go, Durant crashed into the Cavaliers star en route to the hoop and was called for an offensive foul with 36.4 seconds remaining.

However, instead of Cleveland getting the ball with a chance to put the game away on its next possession, the referees changed the call to a block on James, giving Durant an opportunity to tie the game with two free throws. He did.

James countered immediately with another driving hoop, but this time Stephen Curry responded for the Warriors with a three-point play, putting Golden State on top 107-106 with 23.5 seconds remaining.

George Hill then had a chance to be a hero for the Cavaliers, but he missed the second of two free throws with 4.7 seconds left after having tied the score.

JR Smith grabbed the rebound of the second foul shot and dribbled the ball out to midcourt instead of going for a potential game-winning shot. The clock expired and the game went into overtime.

After using their patented third-quarter spurt to go in front by as many as seven points, the Warriors found themselves in a 94-all tie before Green and Curry hit consecutive 3-pointers to create a six-point lead with 4:39 to go in regulation.

Curry finished with 29 points, Durant 26 and Thompson 24 for the Warriors, who have now beaten the Cavaliers in Game 1 four straight years in their historic stretch of consecutive duels in Finals.

Green just missed a triple-double with 13 points, 11 rebounds and nine assists for Golden State, which is attempting to repeat as champions.