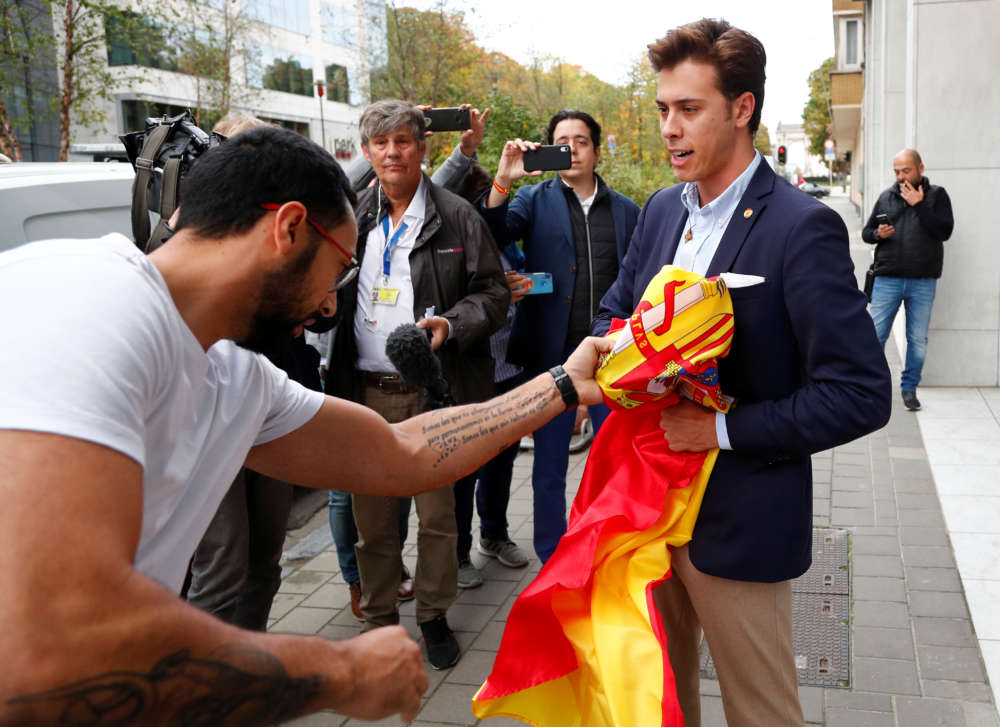 Spain’s Supreme Court on Monday jailed nine Catalan separatist leaders for between nine and 13 years for their role in a failed independence bid, a decision that triggered protests in the region and left the future course of the dispute uncertain.

Acting Prime Minister Pedro Sanchez said the leader’s imprisonment signified the defeat of the independence movement, whose long-running campaign has caused Spain’s most serious political crisis since the death of dictator Francisco Franco four decades ago.

But after the court in Madrid announced the verdicts and prison sentences, protesters marched on Barcelona’s airport, blocked highways and halted traffic at several places in the northwestern region.

The strength of the protests could be the first indication of how the future looks for the independence struggle, which has so far been largely peaceful. Nor does the ruling answer the question of how to handle the separatism drive supported by nearly half of Catalonia’s population.

“This sentence is an attack on democracy and the rights of all citizens,” the president of the Catalan parliament Roger Torrent said. “Today we are all convicted, not just 12 people.”

The case concerned an independence referendum held in October 2017 despite being ruled illegal by Spanish courts, and the subsequent short-lived declaration of independence by the regional parliament.

The longest prison term – 13 years – was imposed on the Catalan government’s former deputy leader, Oriol Junqueras. The court convicted him and eight other leaders on charges of sedition and four of them of misuse of public funds.

“What happened on October 1 was not just a demonstration or a massive act of citizen protest,” the Madrid court said in its ruling. “It was a tumultuous uprising encouraged by the accused, among many others.”

Prime Minister Sanchez, a socialist who had taken a less rigid line with the separatist movement than his conservative predecessor, said it was time to open a new chapter but he did not elaborate.

“Today’s decision confirms the defeat of a movement that failed to gain internal support and international recognition,” he said in a televised speech.

The jailed men sent out messages of defiance, urging people to take to the streets.

The CDR grassroots movement said on social media: “It’s time to rise up against the authoritarian fascism of the Spanish state and its accomplices. It is time for the #RevoltaPopular (popular revolt).”

Many protesters marched to Barcelona’s airport. Riot police cordoned off dozens of protesters, some of whom were hooded and wearing masks, at one airport access hall. Airport operator AENA said some flights could be affected.

The high-speed rail link between Barcelona and France was interrupted as was the regional train network due to protests in the separatist stronghold of Girona, where people stood on the tracks wrapped in pro-independence flags.

In Barcelona, four main streets were blocked by protesters holding signs calling for “Freedom for political prisoners”. A crowd chanted “We’ll do it again” – a slogan used by separatist supporters who want to hold another referendum.

The ruling is also likely to colour a national election on Nov. 10, Spain’s fourth in four years and influence the direction taken by the separatist movement..

The jailed separatists said via social media that they would carry on their fight.

“Nine years in prison won’t end my optimism. Catalonia will be independent if we persist. Let us demonstrate without fear, let us move forward determinedly from non-violence to freedom,” said Jordi Sanchez, former leader of the Catalan National Assembly grassroots movement, who was sentenced to nine years in prison.

Catalan regional president Quim Torra, a separatist, called for an amnesty for all 12 leaders and said he would seek a meeting with King Felipe and Sanchez. He stopped short of repeating calls for civil disobedience.

Sanchez rebuffed the demand and said the sentences must be carried out, although he also suggested dialogue.

Some in Catalonia said they no longer believed in that.

“We had hope for dialogue, but the state is not up for dialogue. The sentence is very unfair, it’s a great shame and very poor democracy,” civil servant Angels Uibal said.

An opinion poll in July showed 48.3% of Catalans against secession and 44% in favour.

The court also issued an European arrest warrant for Carles Puigdemont, who was regional leader during its independence bid. He now lives in self-imposed exile in Belgium. In July 2018, the Spanish court dropped a warrant after Germany refused to extradite him.

Scotland’s First Minister Nicola Sturgeon, who seeks independence for her own country, was among the few foreign figures to condemn the sentences, saying that “any political system that leads to such a dreadful outcome needs urgent change”. (Reuters)