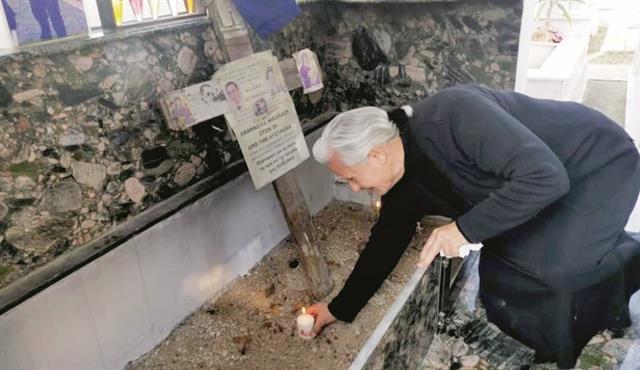 The case of a soldier with a disputed cause of death while serving his mandatory army term in Cyprus in 2005 has taken yet another twist.

Specifically, the lawyer representing Thanasis Nicolaou’s family has sent a strong letter to the Law Office demanding immediate action to be taken against an Athens-based anatomic pathologist who had been appointed by the state to carry out a specialized bone examination.

In the letter, dated July 20, lawyer Loukis Loukaides demanded that they “immediately oblige” Manolis Agapitos to return 37 tiles that have been illegally removed from a specific bone to Nicolaou’s family.

He also noted that the family is in upheaval because of this “sacrilege” at the expense of their loved one.

Thanasis’ mother Adriana Nicolaou told Philenews on Thursday that Loukaides has warned that if the piles are not returned “we will be in an unpleasant position to take immediate legal action against Mr. Agapitos and his associates.”

A month ago, the Law Office said they were ready to order a new investigation – the third of a kind – after fresh forensic evidence pointed to strangulation in the death of the soldier.

The army and police had said the conscript had committed suicide while serving in Cyprus.

Even though the family of then 26-year-old conscript kept insisting all along that the army had covered up a crime.

The family has said that anatomic pathologist Demetra Karayianni who was appointed by them had examined a specific piece of bone and it was determined that the soldier’s cause of death was strangulation and not suicide.