World Tsunami Awareness Day: Risk of one occurring in Cyprus is real

The risk of a tsunami occurring in the Mediterranean is real and Cyprus’ shores have been affected by catastrophic waves in the past, the Geological Survey Department said on Saturday, November 5, World Tsunami Awareness Day.

“Despite the measures taken, everyone should be able to recognise the natural warnings for tsunamis such as a strong earthquake and/or a change in sea level,” an announcement said.

“The effectiveness of any early warning system ultimately depends on how informed and educated a population is, so that it is aware of the risks and potential impacts of a tsunami,” it added.

The Department also noted that the risk of a tsunami in the Mediterranean is smaller than in the Pacific and Indian Oceans, but it is – nonetheless – a real possibility.

In 2016, the government created the Cyprus National Committee of the Tsunami Early Warning System in the Mediterranean and North Atlantic which is coordinated by the Department.

In the case that they detect a tsunami they will send automatic alerts to members of the Tsunami Early Warning System in the Mediterranean and North Atlantic.

In Cyprus, the alerts are received by the Civil Defense, which after assessing them will trigger the relevant national disaster response plan.

Historical occurrences in the Mediterranean

The highest known tsunami wave ever to be recorded in the Mediterranean was a 15-metre wave in Amorgos, Greece following a 7.5-magnitude earthquake on July 9, 1956.

May 2003: A quake near Algeria generated a tsunami which destroyed over 100 boats on Mallorca and flooded Palmas Paseo Maritimo.

17 August 1999: A large destructive earthquake struck north-west Turkey and generated a local tsunami within the Sea of Marmara. Its epicentre was in the Gulf of Izmit. Official estimates indicated that about 17 000 people lost their lives and thousands more were injured.

9 October 1963: In Italy, near the town of Longarone, the entire northern slope of Mount Toc slid into the Vaiont dam. The water spilled over the dam and destroyed a number of villages with a wave of 140 metres. 4 000 people lost their lives.

9 July 1956: The best documented and most recent tsunamigenic earthquake in the Aegean Sea between Greece and Turkey is the one that occurred near the south-west coast of the island of Amorgos, killing 53 people, injuring 100 and destroying hundreds of houses. The waves were particularly high on the south coast of Amorgos and on the north coast of the island of Astypalaea. At these two places, the reported heights of the tsunami were 15m.

28 December 1908: Due to an earthquake and the ensuing tsunami, the city of Messina in Italy was almost completely destroyed. More than 75 000 people were killed.

1672: The Cyclade islands, especially Santorini, were shaken by an earthquake The island Kos, in the east, was completely swallowed by the ensuing tsunami.

26 September 1650: A destructive earthquake was accompanied by a submarine explosion from the Colombo Volcano, which crater lies in the sea to the northeast of the island of Santorini. There was a devastating tsunami observed on the island of Ios, north of Santorini, and waves of up to 16 m were reported.

1303 AD: The quake with an estimated strength of 8 destroyed the island Rhodos and the eastern part of Crete. It caused a tsunami which reached the Egyptian coast.

365 AD: The quake of 8 to 8,5 in the year 365 caused heavy destruction on the whole of Crete. The tsunami that developed because of the quake destroyed complete coastal regions as far as Egypt and eastern Sicily. Records indicate that 50 000 people lost their lives in Alexandria.

In 1628 BC: The coasts of the entire eastern Mediterranean were submerged by flood waves of up to 60 metres high. The wave, caused by a volcanic eruption on Santorini, a Greek island in the Aegean Sea, and is believed to be responsible for the destruction of the Minoan culture. 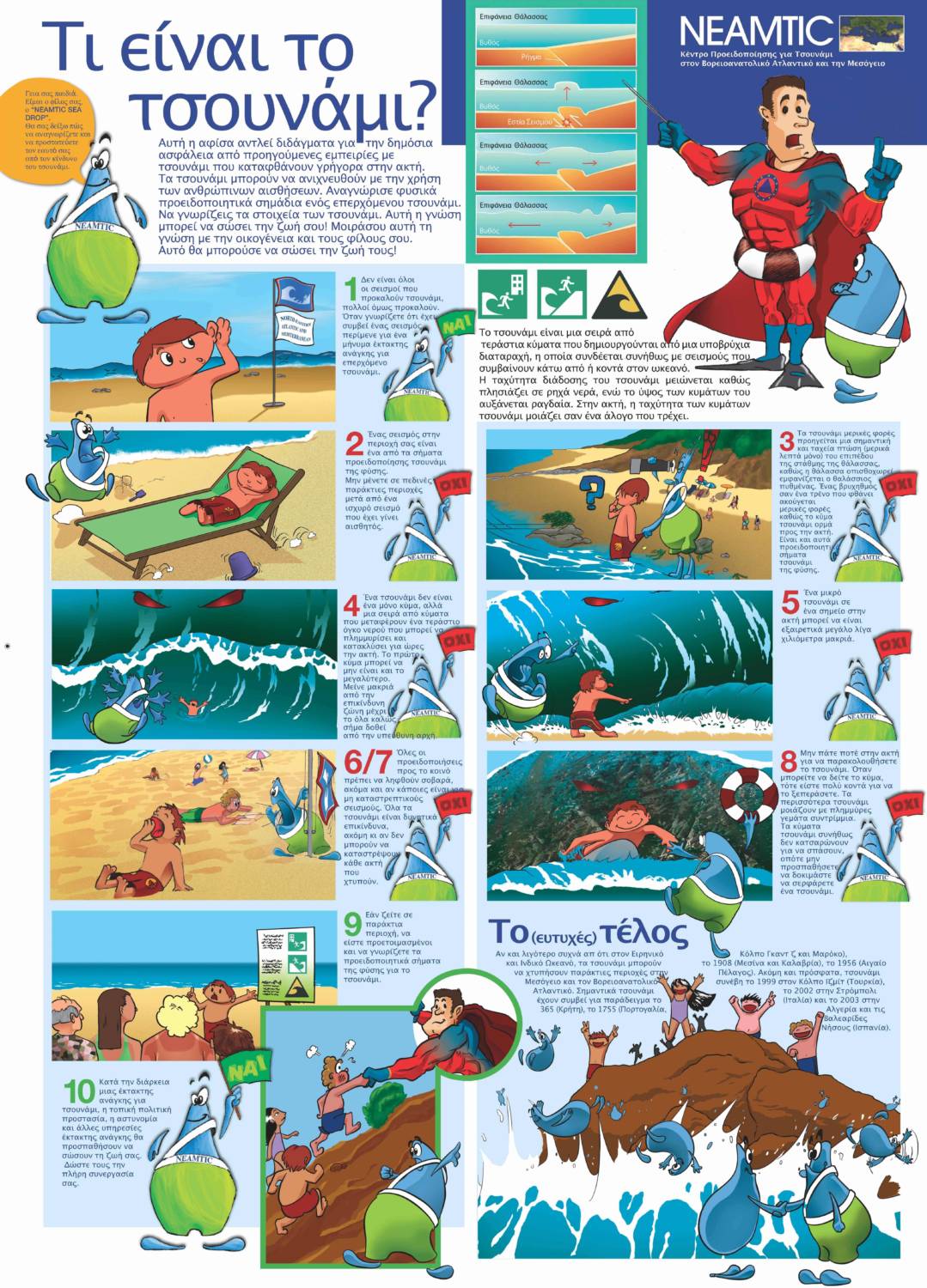