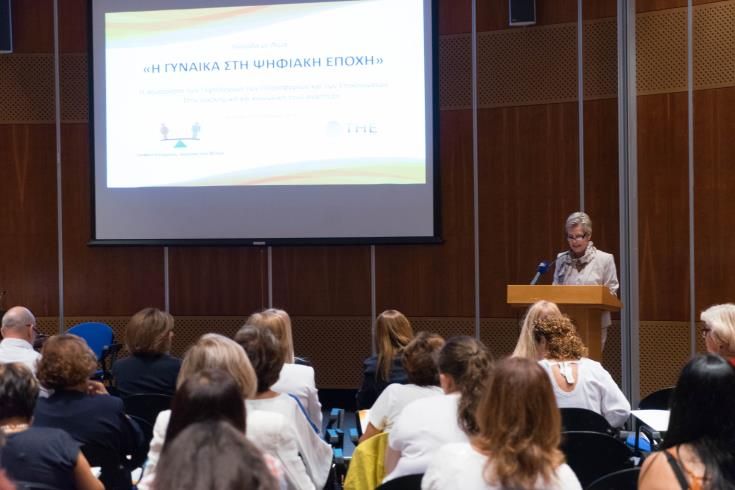 Women are under–represented in the field of information and communication technologies (ICT), both at an educational and professional level, despite the fact that closing the gap between the two genders in ICT would yield important social and economic benefits for them and national economies, speakers at a workshop on women’s role at the digital age stressed on Monday.

The workshop was organised by the Office of the Commissioner of Gender Equality and the National Mechanism for Women’s Rights.

“Women still face significant challenges in the digital technologies sector, which affect all stages of their professional and social development”, Minister of Transport, Communications and Works Vassiliki Anastassiadou remarked.

In addition, only 24 out of 1,000 women who obtained a higher education degree in the EU graduated from ICT departments and only six of them followed a professional career in digital jobs.

The study showed that women working in the digital sector tend to leave their work between the ages of 30 and 44 at a rate of 8.7%, which is four times more than men.

The Ministry “will strengthen existing initiatives and actions, as well as actively contribute to the development of new actions in the framework of the Digital Strategy of Cyprus to address the fact that women lag behind in the digital technologies sector, caused by stereotypes in the media, inadequate education of women in STEM subjects (Science, Technology, Engineering, Mathematics) and insufficient involvement of women in innovation and entrepreneurship” Anastassiadou noted.

Statistics of the European Institute for Gender Equality for the year 2017, cited by the Commissioner of Gender Equality Iosifina Antoniou, showed that Cyprus ranks 22nd among 28 EU Member States, with 55.1 points out of 100.

The effort, she noted, should aim at closing the digital gap between the two genders, promoting female employment and entrepreneurship and removing inequalities in the labour market.

The National Action Plan on Equality between Men and Women 2018-2021, currently presented to the public for consultation, includes “Education and Training of Women in Information Technologies and Communication” as one of its main pillars, said Antoniou.

Former MP and Coordinator of the Committee on Media and Social Networking of the National Mechanism for Women`s Rights, Roula Mavronikola, stressed that the evolution of the mass media and the rapid introduction of digital technology in our lives could contribute to and provide the basis of promoting gender equality.

She said that the media continue to present women’s role and the relation between the two genders in the society in an “insulting and degrading” way for the women of Cyprus.

By In Cyprus
Previous article
1,800 tonnes of used tyres taken to Vasiliko
Next article
Unhygienic toilet at Makarios Hospital slammed