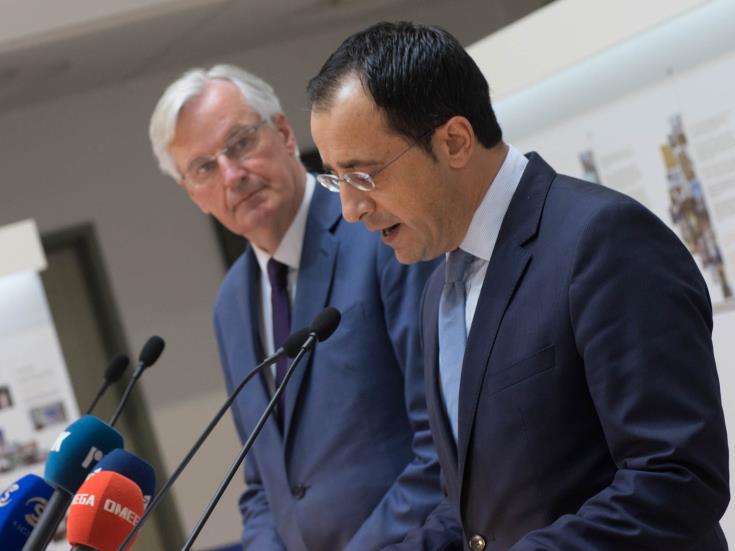 Cyprus Minister of Foreign Affairs Nikos Christodoulides and the EU chief negotiator for Brexit Michel Barnier said the approval of the withdrawal agreement is the only way to secure the UK’s orderly exit from the EU, noting however that the EU and Cyprus are preparing for a no-deal exit.

“The fundamental choice of the UK remains the same. There are still three options, a deal, no deal or no Brexit,” Barnier said in joint statements with Christodoulides.

“Whatever happens and whatever the political situation in the UK the issues and solutions remain the same. However, the discussion in the UK is not mostly about the withdrawal agreement itself but about the future relations between the UK and the EU,” he said.

Noting the he EU awaits clarity from London, Barnier stressed that “in the mean time we keep preparing for no-deal, this is not and will not be the EU choice, it is for the UK to take its responsibility.”

On the issue of the future status of the British SBAs in Cyprus, Barnier, said “our common objective has been, is and will remain to preserve the status quo and avoid disrupting the life of the people living in the bases territory, that what we did in the withdrawal agreement.”

“And in any case we will take all necessary measures to achieve this objective,” he French chief negotiator concluded.

On his part, the Cypriot FM said Nicosia remains “convinced that the Agreement provides the best and only way to ensure a smooth and orderly Brexit with the least adverse consequences for all.”

Christodoulides also said that the EU Council’s decision to extend the UK’s exit until October 31 gives the UK more time to ensures an orderly withdrawal.]
This decision, he added, “was vital under the circumstances, providing much needed space and certainty for our citizens and for our businesses.”

Noting that he EU has done “everything within their power to facilitate the best possible outcome for all, under the circumstances,”, Christodoulides added “it is totally up to London to proceed with taking the necessary decisions so that we may be able to effect the UK’s withdrawal as soon as possible.”

“Whilst we sincerely hope that a breakthrough will be achieved in London that will lead to the ratification by the UK Parliament of the Withdrawal Agreement, we have prepared for all scenarios, in order to ensure that the impact on the daily lives of our citizens and on our economies will be minimized, irrespective of the time and the way in which Brexit will eventually occur,” the Cypriot FM stressed.

With regard to the status of the SBA following Brexit, Christodoulides said Nicosia is “particularly thankful for the close and constructive cooperation we have had with him and the Commission throughout the negotiations on the Protocol dedicated to the British Bases in Cyprus,” adding that this “collaborative process culminated in the incorporation of the relevant Protocol into the Withdrawal Agreement”.