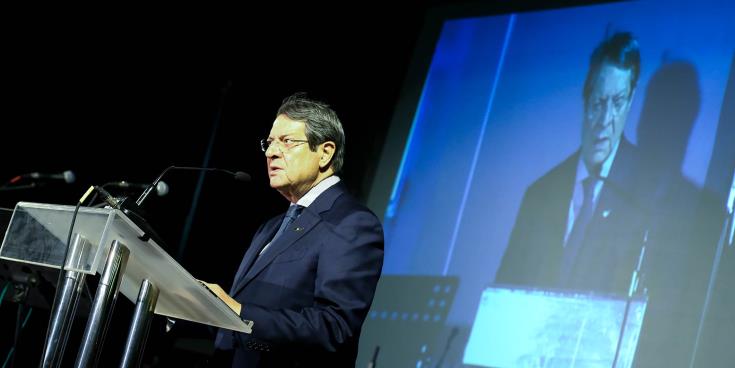 The President of Cyprus Nicos Anastasiades expressed hope that a violation of the special status of Varosha, the fenced off part of Turkish-occupied Famagusta, will be avoided so that a possible resumption of Cyprus settlement talks is not destroyed.

Speaking on Thursday evening at the anti-occupation rally organised by Famagusta Municipality, in Deryneia, President Anastasiades also said that Cyprus’ decisiveness to engage in new talks does not alter the fact that Turkey should terminate the expansionist policy it pursues, in violation of the UN Charter and the Law of the Sea.

Referring to Varosha, the President called on the Turkish side to abandon all threats to either bring in settlers to Famagusta, exploit in part or usurp the fenced off part of the city.

Any violation of the special protection status Varosha enjoy, contrary to the UN Charter and UN resolutions, would constitute a very serious withdrawal from the maps the two sides exchanged and submitted in Geneva, in January 2017, providing for the return of Varosha and of a broader area in Famagusta District, the president added.

Moreover, the president stipulated these positions in a démarche and protestations to the United Nations, more recently on August 10, with a letter he sent to the UN Secretary-General, the five permanent members of the Security Council and the German Chancellor Angela Merkel, whose county is chairing the rotating presidency of the Council of the EU.

The letter details the provocative actions of Turkey and of those who act on behalf of Turkey’s interests, who seek to usurp Varosha, in violation of the UN Security Council resolutions.

In the letter, he also stressed the need to take immediate measures or impose sanctions, the soonest possible.

“I realise that your patience is being tried and that you are under psychological extortion in order to apply en masse to the so called Compensation Committee or – and this is echoed unfortunately also among certain circles in our side – to accept to return to your properties under Turkish Cypriot administration, in case Turkey attempts to open up Varosha” he said addressing the people from Famagusta.

Furthermore, he called on people to consider the implications, if they eventually take the advice they hear lately, noting that the only thing they will achieve is to accelerate the goals of extremist circles among the Turkish Cypriots and of Turkey.

Similar advice in the past led to the overturning of important achievements gained through the Fourth Interstate Application against Turkey and in the Titina Loizidou case, as well as to European Courts decisions acknowledging the rights of users, without ignoring the right to property, he added.

President Anastasiades also expressed his readiness to support and defend a settlement agreement that will provide for the establishment of a truly independent state, completely free of anachronistic guarantees and the presence of foreign troops.

He also called on Turkey to consider the significant benefits, for itself and the region, with the consolidation of a climate that fosters stability, peace and security for all.

He also said that unilateral and expansionist actions, either by violating the sovereign rights within the exclusive economic zone of the Republic of Cyprus, or by threatening to open up Famagusta for settlement, blackmailing Greece or intervening in Syria, Iraq and Libya, are not merely international law violations, but they highlight Ankara’s destabilising role in the region.