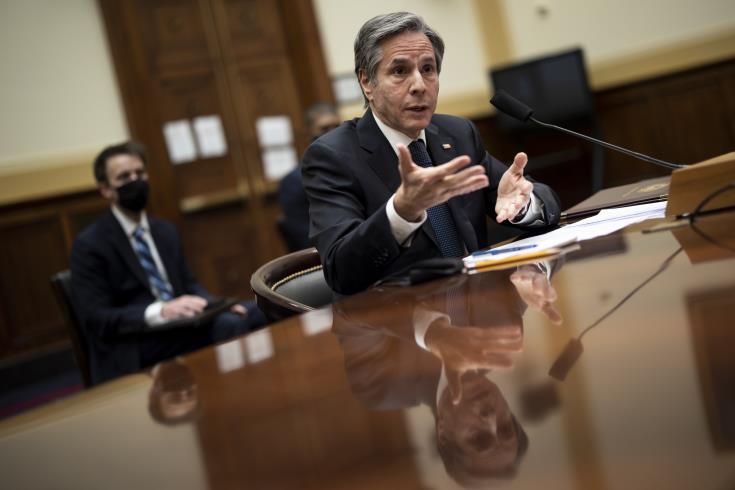 US Secretary of State Antony Blinken said that American diplomacy will be “fully engaged” in the new peace process of the Cyprus problem.

And that the US strongly support a comprehensive settlement that reunifies Cyprus in a bizonal, bicommunal federation.

Blinken made the statements late on Wednesday while testifying before the House Foreign Affairs Committee.

“The Cyprus issue is something we take very – very seriously. We strongly support a comprehensive settlement that reunifies Cyprus in a bizonal bicommunal federation,” he said.

“We will engage in the effort to advance that prospect, including supporting the critical role of the United Nations, as well as direct American engagement in that effort. I think you will see American diplomacy fully engaged” added the US Secretary.

Blinken also said the State Department is very concerned about some aggressive actions they have seen in the Eastern Mediterranean.

“We have and we will continue to call them up. I can safely say that you will see the United States and our diplomats very much involved and engaged on Cyprus and trying after too many – many years to move things forward,” he added.

Blinken was also asked about the trilateral cooperation schemes in the Eastern Mediterranean, Turkey’s democratic backsliding and the role of the US.

“We have looked with real concern over the last year and of course more recently, as the administration has been in office, at some of the actions taken in the Eastern Mediterranean, particularly by Turkey, in terms of the exercises and various claims, whether it is to territory, maritime areas or energy resources,” he said.

“It is very important that the US stands up and engages in advancing stability and sovereignty and territorial integrity of all parties in the Eastern Mediterranean and insists that any disputes that arise to be resolved peacefully, diplomatically, not militarily and certainly not through provocative actions.

“We have called out actions, including by Turkey, that in our judgment violate international law or commitments as a NATO ally in the case of the S-400s and that includes provocative actions against Greece, like violations of airspace etc,” he added.

However, he also said, “one of the positive developments is Turkey’s more positive engagement in recent weeks with the EU in particular in that area. And so we are hopeful that temperature at least in that area will continue to go down and remain low.”

The latest round of negotiations, in July 2017, at the Swiss resort of Crans-Montana, ended inconclusively.

The UN Secretary-General invited all parties involved to attend an informal five-plus-one meeting on the Cyprus issue in Geneva, Switzerland, between April 27 and 29, 2021.