US energy official: Provocative actions in East Med should be avoided 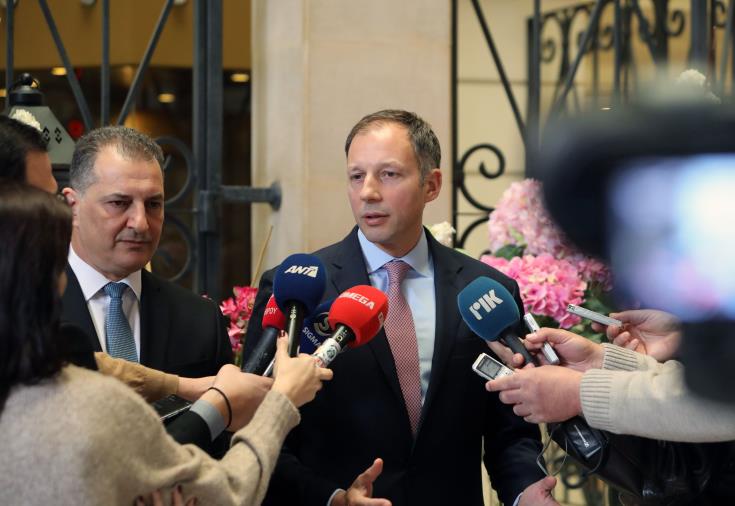 US Assistant Secretary of State for Energy Resources, Francis Fannon, referred on Wednesday to the importance of the “3+1” mechanism for energy cooperation in the Eastern Mediterranean, established by Cyprus, Greece, Israel and the United States while calling on all parties to refrain from taking any provocative action that can create further instability.

Fannon addressed this morning a 3+1 technical group meeting, in Nicosia, along with Cyprus’ Energy Minister, Yiorgos Lakkotrypis. In statements, on the margins of the meeting, Fannon said that “this 3+1 construct is an important vehicle to facilitate that level of cooperation among states.”

He said, moreover, that energy resources are a catalyst for broader cooperation and that the United States remain committed at the highest level.

He reiterated moreover the US position with respect to Cyprus’ offshore exploration and exploitation activities, saying that “we support the Republic of Cyprus to develop its resources in its EEZ” the revenues of which could be used for both communities, in the context of an overall settlement.

The United States views energy development of the region as a mean for broader political stability and prosperity, the US official said.

He referred to new energy trading relationships, saying that they were unthinkable just a few years ago and now they are meaningful and are moving forward. “Cyprus has an incredibly important role to play in this new energy corridor that is still developing throughout the region” Fannon added.

He also said that he was proud that US companies are engaged in all aspects of regional cooperation, that will countries to develop their own energy pathways through this cooperative model.

Speaking about Wednesday’s inaugural session of the technical work group, the US Assistant Secretary said that it allows the US to make its own contribution to the discussion and share its own experience on responsible resource development that safeguards the environment.

Their mandate is to highlight specific energy prospects and propose ways for their implementation in the areas of energy infrastructure, RES and energy storage and cyber security for energy infrastructure, among others. Wednesday’s meeting was about emergency preparedness and responses mechanisms for offshore oil and gas operations.

In statements to the press, Lakkotrypis said that Nicosia expects to extend its cooperation with the United States further, in order to be able to implement the vision of Cyprus and that of other countries in the region.

“Cooperation among our three countries plus the US is very important” Lakkotrypis went on, noting that it shows the cooperation model all countries in the region ought to pursue, in order to promote the joint interests of their people.

The Energy Minister also said that the rest of the technical work groups will convene soon.

Addressing earlier the meeting, Lakkortypis also referred to Turkey’s continues illegal exploration activities in the EEZ of the Republic of Cyprus “escalating since last May and clearly violating international law and Cyprus’ sovereignty and sovereign rights.”

Regrettably, Turkey continues to defy the international community’s repeated calls to cease this provocative behavior and adhere to well-established principles of international law, the Minister noted.

The meeting was attended by officials from the Ministry of Energy and the Foreign Ministry, as well as experts from several government departments and services from Cyprus, Greece, Israel and the United States. Israel’s Ambassador to Cyprus and representatives from the Greek and US Embassies also took part.

As CNA learns, Fannon is expected to go to Ankara and Cairo for contacts, after completing his visit   to Cyprus on Thursday.