US deeply concerned by Turkey’s intention to drill in waters off Cyprus, Ambassador Garber says 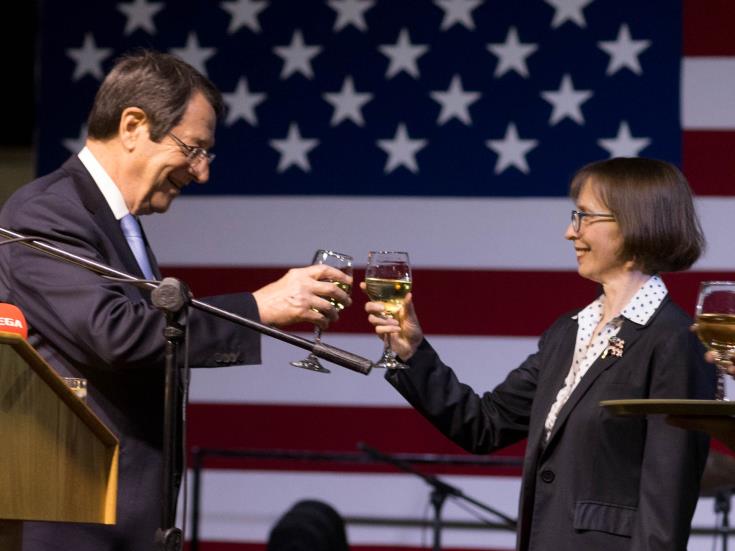 The US has been deeply concerned by Turkey’s announced intention to begin drilling in the waters off Cyprus and we have urged the Turkish authorities to halt these operations, US Ambassador in Cyprus Judith Garber said on Thursday evening, speaking during the Independence Day reception hosted at the US Embassy in Nicosia, in the presence of Cyprus President Nicos Anastasiades and US Deputy Assistant Secretary for European and Eurasian Affairs Matthew Palmer.

Garber noted that the United States recognises the right of the Republic of Cyprus to develop resources in its Exclusive Economic Zone. “We also believe these resources should be equitably shared between both communities in the context of an overall settlement. It is our earnest hope that such resources will soon benefit a united Cyprus,” she added.

The US Ambassador said that the discovery of hydrocarbons in Cyprus’ EEZ offers great promise. “We hope such resources promote prosperity in the entire Eastern Mediterranean and help to diversify Europe’s energy supply,” she noted.

On his part, President Anastasiades expressed in his address the deep appreciation of Cyprus to the US government for the firm stance “on this crucial matter through opposing to Turkey’s illegal drilling plans and fully supporting the unhindered exercise by the Republic of its sovereign rights to explore and exploit its natural resources.” He also expressed his sincere appreciation for the principled stance of the US government on the Cyprus problem and the unwavering support in reaching a lasting and comprehensive settlement.

Anastasiades underlined the importance that the government of Cyprus attaches to the partnership with the United States, stressing that “our aim remains none other than to maintain the current momentum and to continue working on a positive agenda so as to further reinforce this mutually beneficial relationship.”

“In this regard, and considering the strategic depth of our partnership, I strongly believe that, based on the principles of reciprocity and solidarity, there is room for further advancing it in specific fields, such as updating the 1984 Agreement for the Avoidance of Double Taxation, Cyprus joining the Visa Waiver Programme and revoking the embargo on the sale of military and defence related equipment to Cyprus,” he noted.

In her speech Garber noted that the United States continues to support efforts by the leaders of the Greek Cypriot and Turkish Cypriot communities, facilitated by the United Nations, to forge a just and lasting settlement of the Cyprus problem that will reunify the island as a bizonal, bicommunal federation. We hope negotiations will resume soon, and we firmly believe a reunified island would offer a better and stronger future for all Cypriots, she stressed.

The Ambassador noted that she is extremely fortunate to come to Cyprus at a point when U.S.-Cypriot relations have never been stronger.

“As Secretary Pompeo noted at a recent trilateral meeting in Jerusalem with you, Mr. President, along with your Israeli and Greek counterparts, we see Cyprus as a `key partner in security and prosperity.’ We have to be partners in order to build a better and stronger future. This is the foundation for everything we are doing to expand and deepen our bilateral security partnership, and the relationship between our two countries,” Garber said.

President Anastasiades said, on his part, that during the past few years the relationship between Cyprus and the US has significantly strengthened, both at the bilateral and multilateral level, particularly through our joint commitment and close co-operation, amongst others, in the fight against terrorism, human trafficking, illegal drugs trafficking and the proliferation of weapons.

He noted that the involvement of American energy companies, namely ExxonMobil and Noble, in the Exclusive Economic Zone of the Republic of Cyprus does not only mark a new chapter in our bilateral relations, but it is also a tangible sign of trust to the reliable role we have assumed in our volatile neighbourhood.

To this end, the participation of the US Secretary of State, Mike Pompeo, in the recent Trilateral Summit of Cyprus, Greece and Israel in March, during which it was agreed to increase regional cooperation, support energy independence and security, strongly reflects our enhanced partnership, particularly in the fields of energy and regional security, he added.

Referring to Turkey`s illegal actions in Cyprus` EEZ, the President said that this is a situation that, “regrettably, deters our efforts to resume negotiations on the Cyprus problem, particularly in a period when the UN Secretary General is trying to provide renewed impetus to the process, following the appointment of his Special Envoy Mrs. Jane Holl Lute.”

At the same time, it should be stressed that such actions also negatively affect our joint vision of establishing, together with neighbouring countries, a strategic Energy Corridor from the Eastern Mediterranean to Europe, he added.

He stressed that “our top priority in Cyprus” is “to end the unacceptable status quo on the island and create a better future for all Cypriots, Greek and Turkish, ensuring their peaceful co-existence and prosperous collaboration.”

He reiterated in the strongest terms his commitment to immediate engage in a new dialogue, provided Turkey terminates its acts which violate the sovereign rights of the Republic of Cyprus, so as to allow negotiations to resume on the basis of good will, with the aim of a reaching a viable and functional settlement.

Moreover, he noted that taking also into account recent actions in the buffer zone, “it is also vital that UNFICYP’s (UN peacekeeping force in Cyprus) mandate remains unaltered as it contributes to establishing an environment conducive to settlement talks through its efforts in keeping by tensions at a minimum, despite numerous challenges it faces.”