US Assistant Secretary of State Wess Mitchell to visit Cyprus 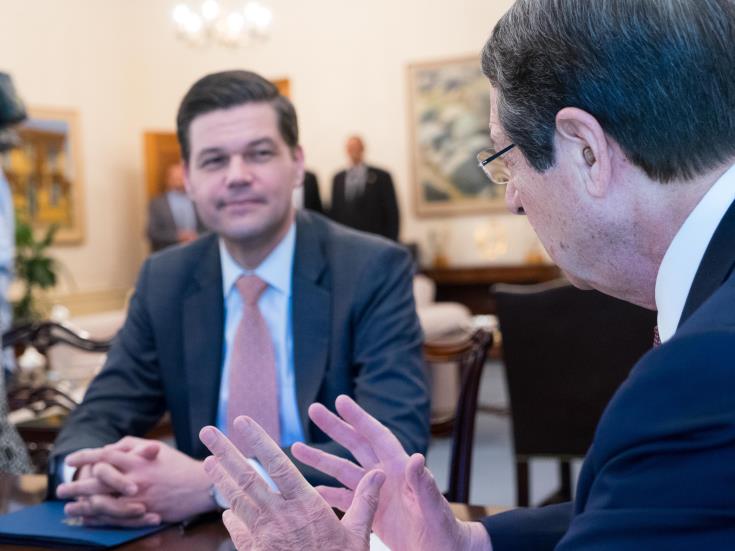 US Assistant Secretary of State for European and Eurasian Affairs Wess Mitchell is expected to visit Cyprus in November. Reliable sources have told the CNA that Mitchell’s visit will take place on November 1.

Meanwhile, addressing an event of the Atlantic Council entitled “Championing the Frontlines of Freedom: Erasing the “Grey Zone” in Washington, Mitchell said Greece and Cyprus play an important part in the US strategy in the Eastern Mediterranean.

The US official said that what the US has tried to do in the Eastern Mediterranean was first and foremost to stabilise their relationship with Turkey. “I think we have come a long way in the last few days with the release of Pastor Branson. We are hoping to move the Turkish government away from S-400 and help it look other options and keep Turkey not only on a trajectory towards the political west, but also towards the strategic west. And I think that is in Turkey’s interest as well,” Mitchell remarked.

He noted that Greece and Cyprus play an important part in the US strategy in the Eastern Mediterranean. “I will be travelling to Cyprus in a few days and what we really try to do there is to have U.S. more present not only in the bilaterally with these countries, but in the Greece, Cyprus and Israel dialogue,” he said. “I think there is a real case to be made for seeing eastern Mediterranean as a frontier and a very vulnerable frontier.”

Mitchell said that the scale of Russian presence in Eastern Mediterranean and “the fact that Iran also wants a window into the Mediterranean” should cause concern, “so we are working to strengthen relationships with the stable democracies in that region.”