Update: Hotelier climbs down from hotel’s roof after threatening to jump over an eviction 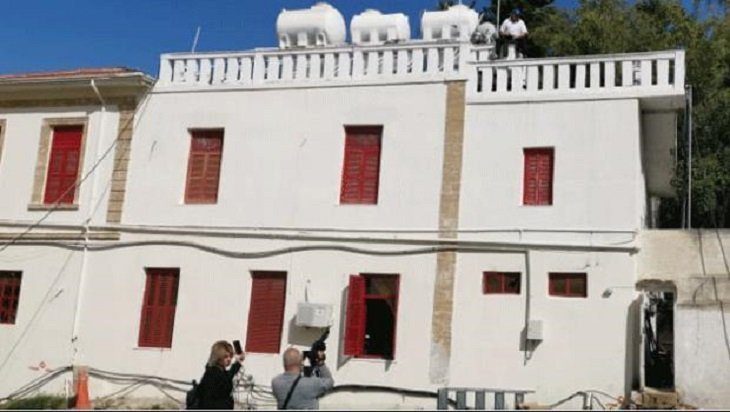 A hotelier, tenant of Turkish Cypriot property in Paphos, has climbed down the roof of his hotel after he threatened to jump over an eviction of part of the property.

The man climbed on the roof of the two-storey hotel after employees of the custodian of Turkish Cypriot properties went to the location to retrieve a basement area and a storage space, adjacent to the hotel.

According to philenews, the man has been renting the building from Greek Cypriots who were given the property by the custodian.

The man climbed on the roof of the hotel around 7:30 in the morning and stayed there until 5 pm, claiming that authorities are targeting him and are trying to “financially strangle” him with the evictions and with roadworks that are currently conducted in the area of his businesses.

He said that he will only get off the roof if a court issues a decree to stop the eviction.

However, he was convinced to come down after he was promised a meeting with the director general of the Interior Ministry to discuss the issue.

Employees of the custodian of Turkish Cypriot properties changed the locks of the basement area and the storage space.

Philenews explains that the custodian and the municipality of Paphos want to retrieve these properties in order to create a square.

The eviction of the businessman from the properties is perfectly legal, custodian of Turkish Cypriot property officer Maria Savvidou told CNA on Tuesday.

She said that the man did not sign a contract for the properties located next to his hotel, despite the custodian’s attempts to convince him to do so which started in 2016.

The custodian is taking legal action against the man for inflicting damage in Turkish Cypriot property, Savvidou said.

The properties in question have been donated to the municipality of Paphos after a court order and contracts have already been signed, Savvidou concluded.