‘Up to You(th)’ Festival returns on September 24

After a two-year interruption, the ‘Up to You(th)’ Festival is making a comeback on the 24th of September at 17:00 at Acropolis Park in Nicosia, a Youth Board of Cyprus announcement said.

“The 6th edition of the festival with the slogan ‘Up to You(th)’, invites the public to a celebration of youth, powered by the youth, to state emphatically that the present and future are in the hands of the new generation, a generation that dares to dream and to hope for a better future.”

The NGO Fair, a staple of the festival, co-organised with the NGO Support Centre and the Cyprus Youth Council, returns with the participation of 80 Civil Society Organisations, providing the opportunity for young people to engage with and become actively involved in matters that affect them such as the environment, human rights, culture, volunteering and much more.

The festival will also include a Tech Fair, exhibiting technologies developed by educational institutions and other organisations and inviting young people to participate in interactive applications of technology, including robot races. and competitions, virtual reality and programming, while SiCo organisation will also perform fascinating science experiments open to participation from the public.

Additionally, young people will be allowed to participate in social activities such as an alternative library, the Human Library, where they can meet human books who will narrate their stories and engage in an imaginative dialogue with the reader!

This year’s festival has prepared a rich programme for the public, which includes live music, graffiti art, screenings of short films by Cypriot filmmakers coordinated by “GeekOtopos”, as well as impressive structures built by the Cyprus Scouts. Furthermore, the Cyprus Astronomy Organisation will enable the public to discover the stars and planets in the sky, through their telescopes.

All those who attend the festival will also have the opportunity to participate in open discussions around issues that concern the youth, workshops and other social activities such as a basketball match on wheelchairs played by the teams Nicosia Team Rollers and Ifestos Sports Club, to promote the message that sport is for all and to support the social inclusion and integration of people with disabilities through sport. Further to these actions, the festival will encourage a spirit of exchange by asking the public to bring any books they no longer need and exchange them with other books, through the Shared Library organized by the Pancyprian Organisation for the Promotion of Literacy.

For the little visitors, there will be a children’s area with access to fun activities such as ceramics, board games, face painting and shadow puppet shows.

The 6th ‘Up to You(th)’ Festival will take place during a year devoted to youth since it coincides with the European Year of Youth. The organisation of the festival is part of the broader goal of the Youth Board of Cyprus, to inspire the active participation and civic engagement of more and more young people. 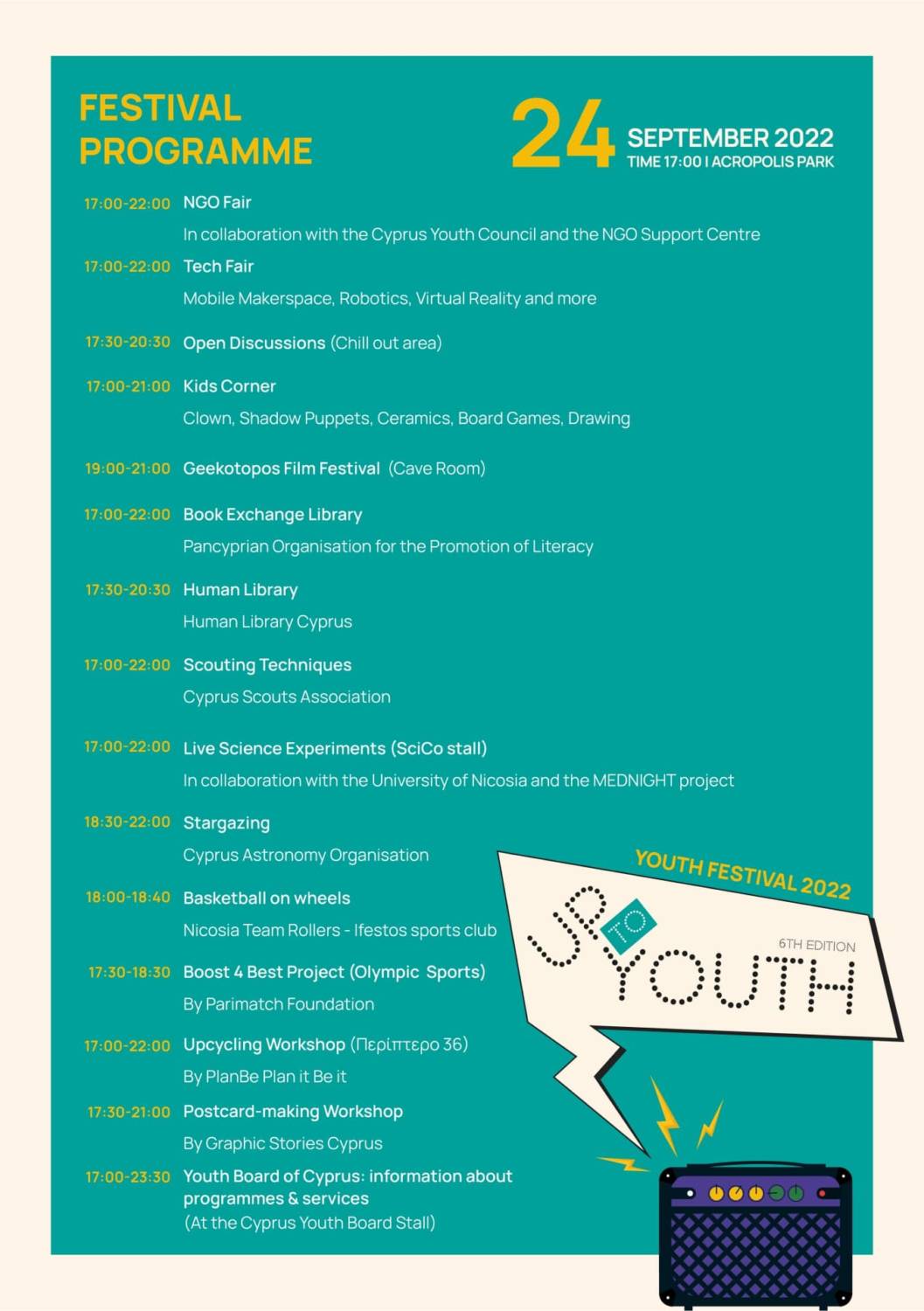