UNSG still hopeful that a durable Cyprus settlement can be achieved 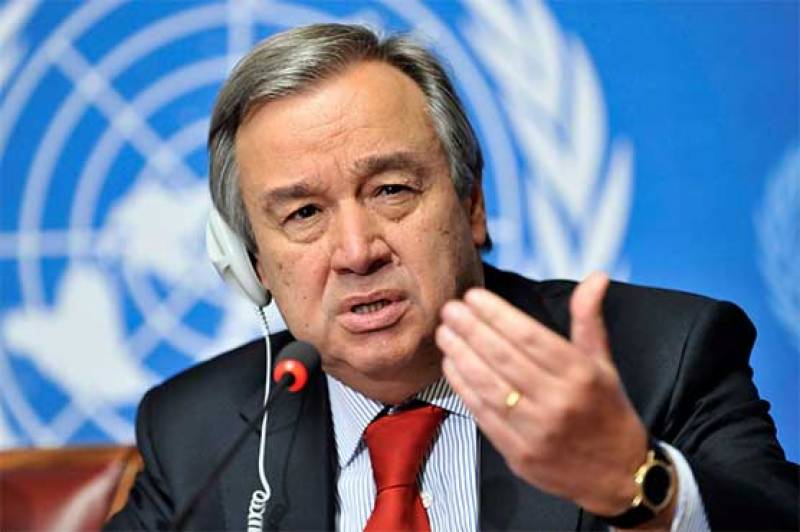 UN Secretary-General Antonio Guterres said that he continues to hold out hope that a durable settlement to the Cyprus problem can be achieved and urged all parties to take advantage of this period of consultations “to lay the groundwork for fresh and unambiguous commitments to achieve a peaceful settlement, which has eluded Cypriots for so long.”

Guterres said in his report about his good offices mission in Cyprus that he welcomes the constructive engagement of the sides, the guarantor powers and other interested parties with his special envoy Jane Hall Lute and credits this engagement with helping to maintain prospects for peace, which, ultimately, lies in the hands of the two sides.

“The people of Cyprus deserve to know that this time it is different. I again urge the leaders, the guarantor powers and other interested parties to make productive use of the coming period. In this context, I would reiterate my call on the parties to constructively consider the framework of six points that I offered on 30 June 2017,” Guterres said in his report an unofficial copy of which was handed over on Thursday evening to the UN Security Council members. Two ten-page written updates by Cyprus President Nicos Anastasiades and Turkish Cypriot leader Mustafa Akinci were requested by the Security Council in resolution 2483.

The report focuses on developments from 11 April 2019 to 30 October 2019, providing an update on the activities carried out by the UNSG`s mission of good offices under the leadership of his Deputy Special Adviser on Cyprus, Elizabeth Spehar. It also includes an update on the consultations conducted senior United Nations official, Ms. Jane Holl Lute, on Guterres` behalf.

“While efforts continued during this reporting period towards reaching an agreement on the terms of reference, the backdrop to these efforts has been an increasingly complex situation, with rising tensions in and along the buffer zone, in particular along the northern ceasefire line, as well as over the possible opening of Varosha and over hydrocarbons exploration around Cyprus,” the UNSG noted.

He said that with the agreement on the terms of reference still pending, he engaged in separate discussions with the two leaders and other interested parties during their visit to New York at the end of September 2019. “In those discussions, I reconfirmed that my Good Offices remained available to support the parties in their efforts. The leaders agreed to hold a joint informal meeting with me as a potentially constructive step in trying to find a mutually acceptable way forward,” Guterres said.

With respect to Varosha, he said that the United Nations continues to be guided by relevant Security Council resolutions. The Security Council reiterated on 4 October 2019 that no actions should be taken in relation to Varosha that are not in accordance with its resolutions, including resolutions 550 (1984) and 789 (1992). I will continue to monitor developments closely, Guterres noted.

He said that tensions have also increased over developments related to the fenced-off part of Famagusta, Varosha. “The issue has recently attracted attention since the announcement on 18 June 2019 that the Turkish Cypriot authorities would conduct an inventory study as the first step towards its potential re-opening, followed by visits to the closed-off area by journalists and by four Ministers from Turkey, which were facilitated by the Turkish Cypriot authorities,” he added.
He noted that the Republic of Cyprus expressed strong concern over these developments and brought the matter to the attention of the Security Council. “On 9 October 2019, the members of the Security Council discussed the issue of Varosha in closed consultations and subsequently issued a press statement, in which they recalled the importance of the status of Varosha as set out in previous Security Council resolutions, including resolutions 550 (1984) and 789 (1992),” Guterres said.
He noted that the members of the Security Council reiterated that no actions should be taken in relation to Varosha that are not in accordance with those resolutions and stressed the importance of implementing the Council’s resolutions.

“The statement further reaffirmed resolution 2483 (2019) and the importance of achieving an enduring, comprehensive and just settlement based on a bi-communal, bi-zonal federation with political equality, as set out in relevant Security Council resolutions, and called on the parties to engage constructively and with a sense of urgency. The members of the Security Council also encouraged the leaders to agree on and implement new confidence-building measures. Finally, they urged the sides and all involved participants to refrain from any actions and rhetoric that might affect the chances of success for a settlement,” he said.

As regards the natural resources in and around Cyprus, he said that they constitute a strong incentive for a mutually acceptable and durable solution to the Cyprus problem and could serve to engender deeper regional cooperation. “I am monitoring recent developments related to hydrocarbons in and around Cyprus closely and with growing concern. I again urge all relevant parties to exercise restraint and reiterate my call for serious efforts to be made to avoid any further escalation and to defuse tensions,” Guterres stressed.

He said that at a time when the prospects for resumed negotiations remain uncertain, the technical committees can be an important vehicle for bringing the two communities closer together, implementing practical and impactful bi-communal initiatives and mobilizing support for increased dialogue. In this regard, I have noted further signs of revitalization of the technical committees, as demonstrated by increased activities and initiatives registered in the reporting period, and hope to see more progress in the period ahead, he added.

He underscored the importance of the work of the technical committees and the positive impact of confidence-building measures for trust-building between the two communities, expressing the belief that only genuine progress made towards a return to the negotiation table, including through an agreement on the terms of reference, will mark a path to a comprehensive settlement and reassure Cypriots as well as the international community that prospects for the process truly remain alive.

Moreover, he said that public perception surveys have again demonstrated that the desire for a solution amongst the two communities continues to prevail, but that trust remains low. People are sceptical about the prospects for successful talks. Despite repeated calls on the two leaders to better inform the two communities about the contours of a settlement and to improve the overall conditions and atmosphere for the process, the climate has deteriorated further due to increased tensions in and around Cyprus and due to the sides disagreeing over the terms of reference, prolonging the stalemate.
Neither side has made sufficient effort to avoid unhelpful rhetoric which has further reinforced scepticism amongst the public, Guterres said.

By In Cyprus
Previous article
Venice hit by another ferocious high tide, flooding city
Next article
AKEL concerned about surveillance enterprise in Larnaca