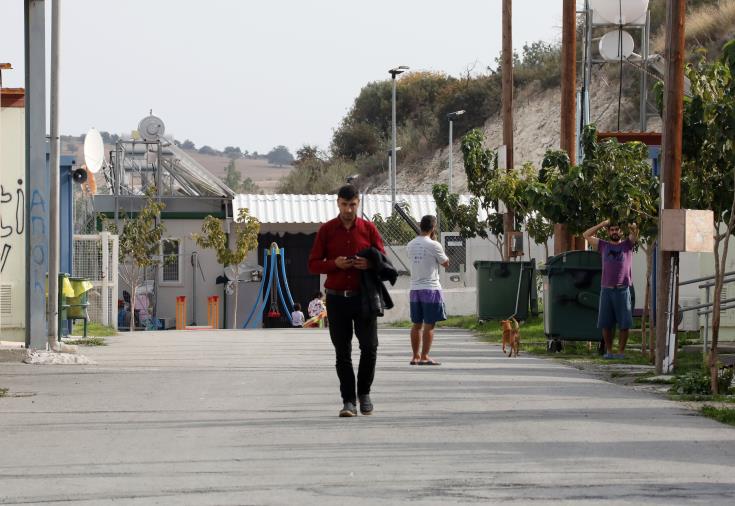 The UNHCR office in Cyprus has made recommendations to the authorities in an effort to include refugees in the planning and response to the covid-19 pandemic and has offered solutions for the protection of refugees in reception centers and of public health.

UNHCR Representative in Cyprus, Katja Saha has told the Cyprus News Agency that the overcrowding of the two centers in Kofinou and Kokkinotrimithia should be avoided.

She explained that while UNHCR in Cyprus does not have an operational role, in light of the pandemic,  it has offered to the government of Cyprus its support to increase the government’s capacity to provide shelter and basic hygiene items to asylum-seekers, ensuring at the very minimum temporary access to shelter.

“Further to a relevant request by the authorities, UNHCR has procured and will soon supply the Republic with 200 tents, 2,500 blankets, and hygiene items for use at the first reception facility in Kokkinotrimithia and the reception center in Kofinou to improve the conditions of those currently accommodated in the two centers, while we maintain that no further transfers of asylum seekers from hostels should take place to avoid further overcrowding the two reception centers,” Saha told the Agency.

She pointed out that major issues of concern relate to access to territory and asylum procedures, the decision to relocate vulnerable asylum-seekers from hotels or other structures to already overcrowded reception centers, the increase of homelessness and destitution and obstacles in access to health.

“While fully supporting measures aimed at controlling the epidemic such as testing and quarantine, UNHCR advocates for solutions that meet both the public health and refugee protection requirements. In the face of the crisis, we are all vulnerable. The virus does not discriminate but many refugees, those forcibly displaced, the stateless and migrants are at heightened risk. It is vital that everyone, including all migrants and refugees, are ensured equal access to health services and are effectively included in national responses to covid-19, including prevention, testing and treatment. Inclusion will help not only to protect the rights of refugees and migrants, but will also serve to protect public health and stem the global spread,” she underlined.

UNHCR Cyprus Representative said that her office has received numerous reports from asylum seekers who tried to submit their asylum applications at the District Immigration Police authorities, but were not allowed to submit them due to measures taken against covid-19.

She recalled that the right to seek asylum is enshrined in international, EU and national law and there’s an obligation on the part of each contracting State to allow access to the asylum procedures. She explained that while States have the sovereign power to regulate the entry of nonnationals under international law, international law also provides that measures to this effect may not prevent them from seeking asylum from persecution under any circumstances.

“UNHCR has been calling States to ensure that legitimate restrictions on travel to their territories and movement of persons within the country as a result of the outbreak, do not limit the access to territory for persons in need of protection or result in push backs and that access to an asylum procedure is guaranteed. Central to the right to seek asylum is the principle of non-refoulement, provided in Article 33 of the 1951 Geneva Convention relating to the Status of Refugees, which prohibits any State conduct leading to the ‘return in any manner whatsoever’ to an unsafe territory,” she said.

She further told CNA that those who have been unable to register their asylum claims in the last weeks, have not had access to any reception assistance including food and shelter. According to Saha, access to the health care is out of reach for all asylum-seekers who are not entitled to register under the General Health System.  “This is a public health emergency and in order to effectively combat it, everyone, including refugees and asylum seekers, must be able to access health facilities and services in a non-discriminatory manner,” she said.

Saha said that containment measures, including patient isolation and quarantine, are particularly difficult to organize in reception centers, such as the emergency reception center which currently hosts almost 600 persons, way beyond its capacity, with insufficient access to water, electricity and sanitation.

“Given the confined and congested space, implementing and upholding the required preventative measures, including social distancing and hygiene measures, becomes very challenging. This is a concern not only for the inhabitants of such centers, but also for the authorities´ efforts to protect the wider population from human-to-human transmission”, she added.

UNHCR Cyprus Representative also said that her office is concerned about the authorities’ decision to relocate some 860 asylum seekers from individual accommodation in hostels, to the overcrowded Emergency reception center and then possibly to the Kofinou center, which is already operating at full capacity.

“Dozens of persons have already been moved to the Kokkinotrimithia tent camp, including vulnerable persons at high risk groups. The area where they were placed has no electricity nor access to running water for the necessary sanitation. Chemical toilets have been installed in the stead and a water hose with cold water has been extended instead of showers, ” she said.

She recalled that the International organisation Médecins Sans Frontières (MSF) has warned, that the overcrowded camps provide the perfect storm for a covid-19 outbreak, and it may prove impossible to contain an outbreak in such camp settings. Such an outbreak, she said, may affect the residents, the government and other workers at the centers and the general population alike.

“Against this context, UNHCR recommends the consideration of a number of measures in reception centers hosting asylum-seekers. These include the shifting to independent private accommodation, in particular for older persons or persons with pre-existing medical conditions, for whom covid-19 presents an especially high risk, the decongestion of existing centers to reduce the risk of transmission, regular cleaning and disinfection and enhanced water, sanitation and hygiene measures, including hand-washing facilities and disinfectant gel in all rooms. Modalities of service and assistance provision in the center shall be adapted to prevent crowds or gatherings, and lines and waiting rooms managed so as to enforce the minimum two meters distancing rule, and avoid unnecessary contact,” she pointed out.

She said that there are concerns about the confinement of over 600 asylum seekers in the emergency reception center since the beginning of the crisis without being quarantined for medical reasons and she recalled that there have been warnings by many organizations (UNHCR,OHCHR, IOM, WHO) that the situation for refugees and migrants held in formal and informal places of detention, in cramped and unsanitary conditions, is particularly worrying considering the lethal consequences an outbreak would have.

According to Sahaa, homelessness has reportedly increased amongst asylum seekers, including amongst persons reporting being sick. She said that many asylum-seekers and refugees living in the cities have been among the hardest hit since the outbreak in Cyprus.

“Even before the outbreak of the pandemic, many have been living under the poverty line, often in substandard and overcrowding conditions, due to lack of meaningful employment opportunities and meagre welfare assistance. Such living conditions render them particularly vulnerable to infection. Their situation has further exacerbated due to the fact that many refugees assisting organisations and charities across the country had to cease their operations due to the measures taken to contain the spread of coronavirus and protect the health of all concerned. In fact, a number of asylum-seekers and refugees who had been reliant on charities assistance for their subsistence, have now been left without food and other essential supplies since the outbreak of the pandemic in Cyprus, ” she told CNA.

Saha pointed out that this crisis demands a coherent, effective approach that leaves no-one behind, adding that at this crucial moment we all need to rally around a common objective, fighting this deadly virus. Many refugees, displaced, stateless people and migrants have skills and resources that can also be part of the solution.

Saha also told the CNA that UNHCR is prioritizing access to accurate information on the virus and the related measures taken by national authorities. “We’re therefore supporting the Government of Cyprus by translating the official health advisory and other information related to the emergency into a number of languages of asylum-seekers and refugees,” she said.

To that end UNHCR collaborates with the PIO and as new information arises and new materials are produced, they are also translated. All information is made visible both on UNHCR’s Help Platform https://help.unhcr.org/cyprus/covid-19-coronavirus/and via social media https://www.facebook.com/UNHCRCyprus/posts/3156181214391897 in English, Arabic, French and Somali as well as in ten other languages in order to reach all of the language groups among the community of refugees and asylum-seekers.

She added that flyers were disseminated to camps as well as to NGOs and the Refugee Volunteers to reach out the refugee community in the cities. UNHCR is also working with partners to strengthen communication with communities. To that end, counseling and advice are provided by phone, Skype and through WhatsApp groups.