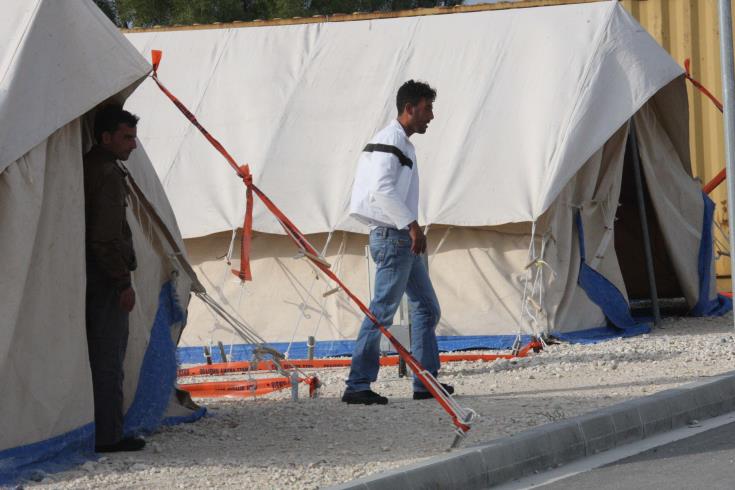 The UNHCR office in Cyprus is pleased that steps are taken to improve the living conditions of asylum seekers and remains hopeful that other measures will be introduced soon to resolve other pending issues refugees and asylum seekers are faced with, due to the COVID-19 pandemic.

Cyprus News Agency spoke with the UNHCR Representative in Cyprus, Katja Saha who visited the Kokkinotrimithia center on April 14 and had the chance to talk with asylum seekers and hear their concerns.

Cyprus Ombudsman also visited the center recently and published a report on April 23 on measures that need to be taken by the authorities in order to tackle the spread of the disease.

Saha told the CNA that according to information her office gathered, a handful of asylum-seekers at both Kokkinotrimithia and Kofinou centers have developed COVID-19 symptoms, tests were conducted and were negative. “No mass testings have taken place and to the best of our information there are currently no plans for mass testings at the centers,” she said.

She explained that for refugees and subsidiary protection beneficiaries who are outside the centers and who develop symptoms, the same protocols are presumably applied as in the case of nationals.

“However, this is not the case for asylum-seekers who are not eligible to register with the General Health Scheme and as such they have no personal doctor to consult if symptoms persist. According to our information, there have been instances where asylum-seekers with symptoms were referred to the Emergency Units of the General Hospitals by the hotline operator and not by a doctor, as required by the protocols,” she told the agency.

She pointed out that national public health and other responses should include refugees, asylum-seekers and address the particular risks affecting them.

UNHCR Cyprus Representatives said that  her office remains in daily contact with the competent authorities and NGOs operating at the centers as well as persons accommodated there and is also closely following the situation as it evolves outside the centers.

As regard her visit to Kokkinotrimithia Emergency reception center she said that she was pleased to note that steps were being taken to improve the living conditions of asylum seekers, namely the installation of additional sanitation facilities, including more mobile showers and sinks with running water, and enhanced lighting of the camp.

“UNHCR was also informed that food distribution points will increase in an effort to ease long queues and improve social distancing in common areas at the camp. UNHCR also appreciates the Ministry of Interior’s confirmation that further transfers of some 800 remaining asylum seekers from hostels to the crowded camp are not considered,” Saha told the CNA.

However, she added, the UNHCR remains concerned with the very challenging situation that the residents are facing. She said that following the decision to turn Kokkinotrimithia into a closed center on the basis of a regulation, some 600 asylum-seekers are staying in a closed tent camp, many for more than two months.

“During the visit to the camp the residents shared many health related concerns and called for improved health care, in addition to sharing concerns about the presence of minors in the camp, among the adults,” she underlined.

She added that the same regulation of 8 April has also been interpreted to apply to other reception centers and as such asylum-seekers at Kofinou as well as unaccompanied children at shelters are not allowed to move out of their shelters.

Saha said that UNHCR increasingly observes a disproportionate use of immigration detention in many countries and has been calling on states to manage restrictions  in ways that respect international human rights and refugee protection standards, including through quarantines and health checks.

“However, health concerns do not justify the systematic or arbitrary use of immigration detention. Quarantine measures may, for example, be a legitimate restriction on the right to freedom of movement provided they’re in the form of a preventive and timebound, 14 days, separation from the rest of the population and they’re implemented in an non-discriminatory and proportionate manner, as a measure to monitor potential symptoms and ensure early detection of the virus,” she added.

Saha added that what needs to be recalled is that any restrictive measure taken vis-à-vis persons deprived of their liberty to prevent the spread of COVID-19 should have a legal basis and be necessary, proportionate, respectful of human dignity and restricted in time.

“Persons deprived of their liberty should receive comprehensive information, in a language they understand, about any such measures. We also continue to receive reports about asylum-seekers not being able to submit their applications for asylum. Tens of persons continue to remain without any access to the asylum procedures for over a month and have consequently been rendered without access to reception conditions, including health care,” she said.

Saha pointed out that UNHCR recalls that access to the asylum process is a fundamental human right principle and that people who are forced to flee conflict and persecution should not be denied safety and protection on the pretext, or even as a side effect, of responding to the virus.
“Asylum claims can also be processed remotely where health restrictions prohibit face-to-face interviews. Other protection measures, such as automatically extending registration cards or residency permits to enable refugees and asylum seekers to access health and other services, can also be adopted,” she said.

She also underlined that UNHCR Cyprus remains ready to discuss ways to address the pending issues and concerns to further ensure the equal and adequate protection of asylum seekers during this pandemic, in line with the international, European and national legislation.