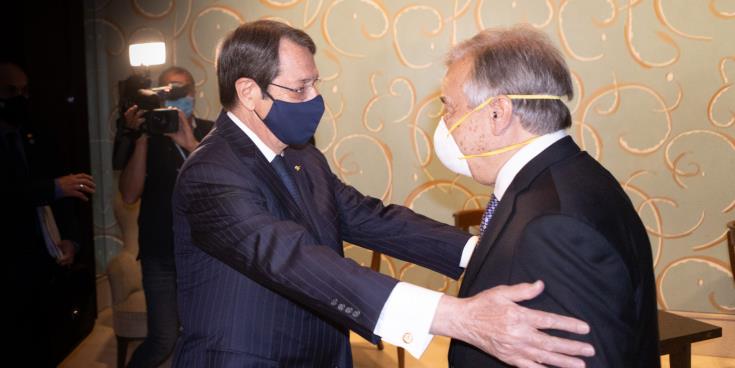 A UN-brokered informal summit on the Cyprus problem in Geneva continues on Wednesday with expectations that this will pave the way for reunification talks remaining low.

At the same time, Cyprus President Nicos Anastasiades who met UN chief Antonio Guterres on Tuesday afternoon repeated that a reunited island should be a functioning and effective state within the European Union.

Earlier in the day, Turkish Cypriot leader Ersin Tatar tabled an unacceptable proposal for a two-state solution to the protracted conflict even though this is outside the parameters of UN resolutions and high-level agreements on Cyprus.

Guterres has invited the leaders of the two communities as well as the foreign ministers of Turkey, Greece and Britain to attend the Geneva-based talks this week in an effort to revive formal peace negotiations that collapsed in mid-2017.

The conflict has stoked wider tensions between NATO members Turkey and Greece, including over hydrocarbon resources.

On Wednesday morning, Guterres hosts a plenary meeting with the five parties, and he is then expected to hold bilateral meetings with each of the five delegations in the afternoon.

Later that evening, Guterres will host an informal dinner for the heads of delegations.

Talks are expected to run until Thursday evening.