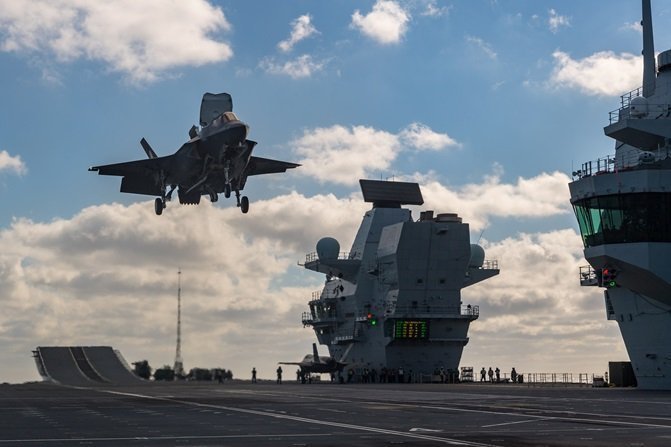 The first overseas deployment by Royal Navy jet pilots in a decade will be to Cyprus later this year, the UK Ministry of Defence said.

This will be the first overseas deployment of the new F-35 stealth jet fighters which replace the RAF Tornado GR4s, retired last February.

The home base of the F-35s is RAF Marham in Norfolk and they will be deployed to RAF Akrotiri in Cyprus.

The deployment of the F-35 will allow RAF and Royal Navy personnel to gain experience in maintaining and flying the aircraft in an unfamiliar environment, the Ministry of Defence (MoD) said.

The first overseas deployment by Royal Navy jet pilots, for the first time in a decade, will take them to Cyprus when the UK F-35 Lightnings leave home skies for the first time. ✈️⚓️??https://t.co/Hmq6gkCcUv pic.twitter.com/XrR9YYdaA6

Two months of training in the eastern Mediterranean is lined up for the personnel of the Lightning Force as preparation for their first spell of training aboard HMS Queen Elizabeth this autumn.

The deployment also train and test all aspects of moving the F-35 aircraft to a new location – including all the logistic support, maintenance and personnel.

According to ITV, the spell in Cyprus is not solely about testing the air crews and their cutting-edge jets in clear, less-cluttered skies. Testing will also include some live firing.

✈️ The UK now has 9 F-35 Lightning jets ready to be deployed on operations around the world. The F-35 Lightnings will form the backbone of the UK’s combat air fleet alongside the newly upgraded Typhoon jets.
? Read more: https://t.co/q41f5yuMDM pic.twitter.com/lVIfls8uaj

If initial operations run smoothly, it is possible that they could be used on strike missions against Islamic State (IS) in Iraq and Syria by the summer, Sky News added.

The F-35 is the first to combine radar-evading stealth technology with supersonic speeds and the ability to conduct short take-offs and vertical landings, the MoD said.

It has the ability to operate from land and sea and is the only fifth generation jet the UK owns.

By In Cyprus
Previous article
British voters say: Give us a strong leader and reform the Brexit-fatigued system
Next article
Protest in Menoyia detention centre