UK High Commissioner: Only plan A for Cyprus 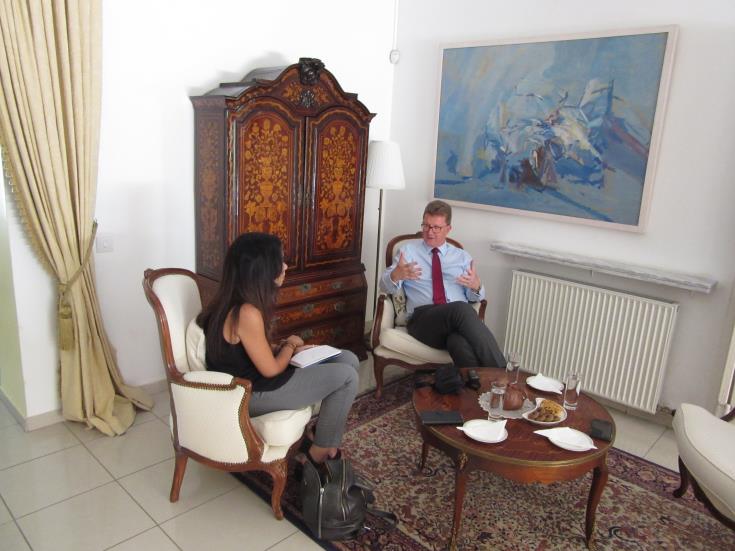 There is a clear plan A for Cyprus, that of a bi-zonal, bi-communal federation solution, and there is no plan B, UK High Commissioner in Nicosia, Stephen Lillie, told the Cyprus News Agency (CNA), stressing that “for plan A to succeed the negotiations need to be well prepared, and the public opinion needs to be well prepared” as well.

Asked if options available are plan A or the division of the island, Lillie underlined that “division would be plan B and there isn’t a plan B,” and that “it is important that everybody involved seizes the opportunity now, before the momentum from Crans’Montana is lost forever,” so that there is a decent plan that can be turned into a full agreement and can provide the basis for a lasting settlement and a lasting reunification of the island. Furthermore, he noted that “the status quo is not an option, unofficial division like we have now is not sustainable.”

The Turkish Cypriot community’s economy he noted, is being badly affected by the tensions and by the turbulence in the Turkish economy, which is something that is important to reflect on.

“It shows how interdependent the Turkish Cypriot and Turkish economies now are, and that is something that has happened over a period of years, and in the future this interdependence will continue and grow unless there is a settlement to the Cyprus problem.  But often people talk as if there is no urgency to resolve the Cyprus problem,” the High Commissioner noted.

He went on to say that “the status quo in Cyprus is not static. As the northern part of Cyprus becomes more reliant on Turkey and as Turkish influence grows there, it becomes more difficult to reunify Cyprus. That’s I think something that all Cypriots need to reflect on,” he added.

He expressed the conviction that a solution would be a win-win situation for both communities, because reunification would multiply the opportunities across the island, it would obviously allow the whole island to be part of the EU, with an integrated economy, and to play a much bigger role in the region.

Replying to a question about the prospects for the resumption of the negotiations on the Cyprus problem, Lillie said that it is clear that the outcome of the Crans-Montana talks was a setback. “On the other hand, progress was made within the talks in a number of areas and there is now an opportunity for the parties to come together again and to build on that and hopefully reach an agreement. Obviously, there is important work to be done to prepare for that. There has to be a proper preparation of the talks by all involved, so that an agreement can then be reached when the leaders come together, as well as a proper preparation of the public opinion, so that the agreement that the leaders reach can then be supported by the public in referenda,” he noted.

Asked if the UK is worried by speculation and media reports according to which Turkey is in favour of a confederation or a two-state solution in Cyprus, Lillie said that “with the Cyprus problem, as in many political issues, it is important not be misled by rumour and speculation.”

“Our clear view is that bi-zonal, bi-communal federation is the best available solution. It may not be perfect, but it is the best most practical available solution. It is easy when things are difficult for people to start throwing other ideas around, but those other ideas have their own complexities and challenges, and it is a long-standing position of the international community, as endorsed in many UN resolutions, that we don’t support a two-state solution,” the British diplomat said.

Asked about Turkey’s threats against Cyprus and drilling operations in its EEZ, Lillie said that the UK government’s position on this is well known and well documented. “We fully support Cyprus’ right to exploit the resources in Cyprus’ EEZ. We hope that these resources can be exploited for the benefit of all the Cypriot people, and we are strongly against provocative action by anybody.”

Asked if he thinks that tension between US and Turkey may affect relations in this area as well, Lillie said that Turkey is a very important country and power in this part of the world adding that the UK seeks to maintain an effective working relationship and partnership with Turkey. “I think at the moment the focus in Cyprus should be on the impact of the Turkish economic situation on the Turkish Cypriot community, ” he noted.

Asked about bilateral relations between the UK and Cyprus, Lillie said that he is very hopeful and optimistic about the two countries’ relations. “Since I have arrived here as High Commissioner I have said on many occasions that my ambition is to build a modern, forward-looking relationship between Britain and Cyprus, a relationship that is built on the many positive foundations that we have. One of the most important foundations is the people-to-people links, a large Cypriot community in the UK, a large British community in Cyprus, the many people who go from Cyprus to study and many British who come here for tourism.”

He noted that “in the future we should do more to deepen and broaden the relationship across a whole range of areas that are related to the economy, to trade and investment, tourism, education, science and research but also to challenging issues around security and cooperation on counter-terrorism and on the other modern security threats that we face.”

“We have the same values, both countries are committed to democracy, the rule of law, to human rights, to tolerance and diversity, they are both members of the Commonwealth, we have this vast array of personal connections. Of course, all of that will continue regardless of Brexit. What we want to avoid is an outcome to the Brexit negotiations that makes things more difficult. So, we want a strong and ambitious agreement between the UK and the EU on Brexit that allows many of our trading and economic links to remain, that allows our security and law enforcement cooperation to continue, and with that kind of agreements it will be even better for UK-Cyprus relations, that will remain strong whatever happens with Brexit,” Lillie said.

Asked about the negotiations between Cyprus and the UK on the British Bases in Cyprus, in view of Brexit, Lillie said that “we and Cyprus have a shared objective which is to ensure that in practice there is no change to the lives and the rights of Cypriot citizens who live and work in the Bases.

“So, we are having negotiations going on with Cyprus to resolve the final legal issues around that. I am optimistic that we will get an agreement,” he noted.

Asked about Cyprus’ role in the region as regards efforts to combat terrorism and to promote security, the High Commissioner noted that Cyprus is like a harbour bridge between Europe and the Near East and the Middle East. “So, it has an important role to play,” he added.

He went on to say that in order to play its full role as a harbour bridge, Cyprus needs to be reunited. “If Cyprus is reunified with access to all ports in the region including in Turkey it will be a real global centre for shipping and a full regional centre for hydrocarbons development if Cyprus can exploit hydrocarbons and then send these hydrocarbons not just to Egypt and to Israel but also to Turkey and Western Europe as well,” he noted.

Furthermore, he said that Britain and Cyprus and all the countries of Europe, regardless of EU membership, “face common security threats and the threat from international terrorism is one of those.”

So we are very determined that after Brexit we should still have a high-level of consultation and cooperation with Cyprus on counter-terrorism and on other law enforcement and security issues, he added.

We want to have strong relations for the post-Brexit era. “These relations will be stronger if the Cyprus problem can be resolved because reunification of Cyprus will open all sorts of new opportunities for the country, will ensure a great potential for Cyprus and I hope for the UK-Cyprus relations,” he stressed.

By In Cyprus
Previous article
Limassol, Paphos vie for foreign buyers
Next article
Man arrested in Paphos for stealing £20 from disabled passenger