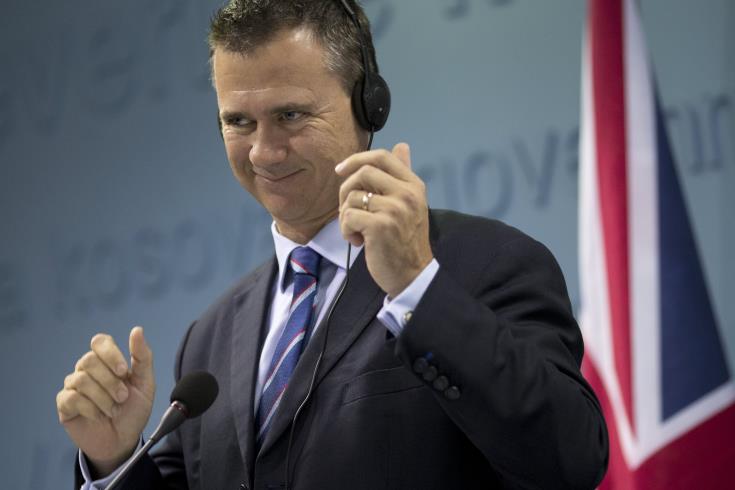 Cyprus is uniquely well-placed as a beacon of stability in the Eastern Mediterranean, says British Minister of State for the Armed Forces Mark Lancaster who arrives in the Republic of Cyprus on Friday for a two day visit.

According to an announcement by the British High Commission, the Minister is expected to underline the deepening defence relationship between the UK and Cyprus and will sign the renewal of the Bilateral Defence Co-operation Programme.

During his stay, Lancaster will hold bilateral talks with Defence Minister Savvas Angelides, visit the Sovereign Bases Areas (SBAs) to review operations, and meet British military personnel on island including with the UN Peacekeeping Force in Cyprus (UNFICYP).

According to the announcement, the centrepiece of the visit will be the signing of a renewed Bilateral Defence Co-operation Programme (BDCP) for the third successive year. The on-going programme of co-operation between the UK and the Republic of Cyprus in defence and security matters includes information-sharing, and joint activity on Counter Terrorism, crisis response, maritime security, search and rescue and illegal migration.

“Both Ministers will reaffirm their commitment to a strengthening their defence partnership in order to address shared defence and security challenges” the announcement goes on.

“We value co-operation with Cyprus as a defence and security partner. The Republic of Cyprus and UK share similar security concerns in the region” says Lancaster on his forthcoming visit.

Cyprus, he adds, “is uniquely well-placed as a beacon of stability in the Eastern Mediterranean to help its allies and partners understand better regional dynamics.” The Cyprus government, he added, has been supportive of our use of the Bases for military and humanitarian operations in Iraq and in Syria.

Moreover, he says that UK military from the Bases also work closely with Cyprus on many domestic and regional challenges, from mutual assistance with forest fires during the hot Cyprus summers to training for Cypriot defence and large scale participation in Cyprus’ biggest civilian-military exercise Argonaut.

Furthermore, the Minister says he has been particularly impressed by Cyprus’ own security transformation, which he calls “better adapted to meet the challenges of aviation and energy security, and the symptoms of conflict and illegal migration.”

“The Minister for the Armed Forces will also take the opportunity of his visit to assure Minister of Defence Angelides that the UK is unconditionally committed to European security and wants to continue to cooperate with the EU on all aspects of our security relationship from foreign and defence policy, to law enforcement and criminal judicial cooperation post-Brexit” the announcement notes.

It is added that during his visit to the British bases, the Minister for the Armed Forces will be briefed on efforts to counter the illegal trapping of birds within the Sovereign Base Areas (SBAs). Enhanced efforts to counter bird trapping has resulted in an estimated 72% reduction in the number of bird deaths in the Sovereign Base Area in last year’s autumn migration, compared to the previous year, the announcement says.

Moreover, the Minister will also meet British troops stationed at the Ledra Palace hotel as part of the UN Peacekeeping Force in Cyprus (UNFICYP). It is noted that the UK remains the biggest troop contributor to UNFICYP with 281 personnel deployed, while the current UK UNFICYP contingent regiment is the Royal Lancers.

Minister of State Lancaster’s visit follows that of the Secretary of State for Defence Gavin Williamson to Cyprus in March 2018. Minister Angelides has also been invited to make a return visit to the UK in autumn 2018, the announcement concludes.