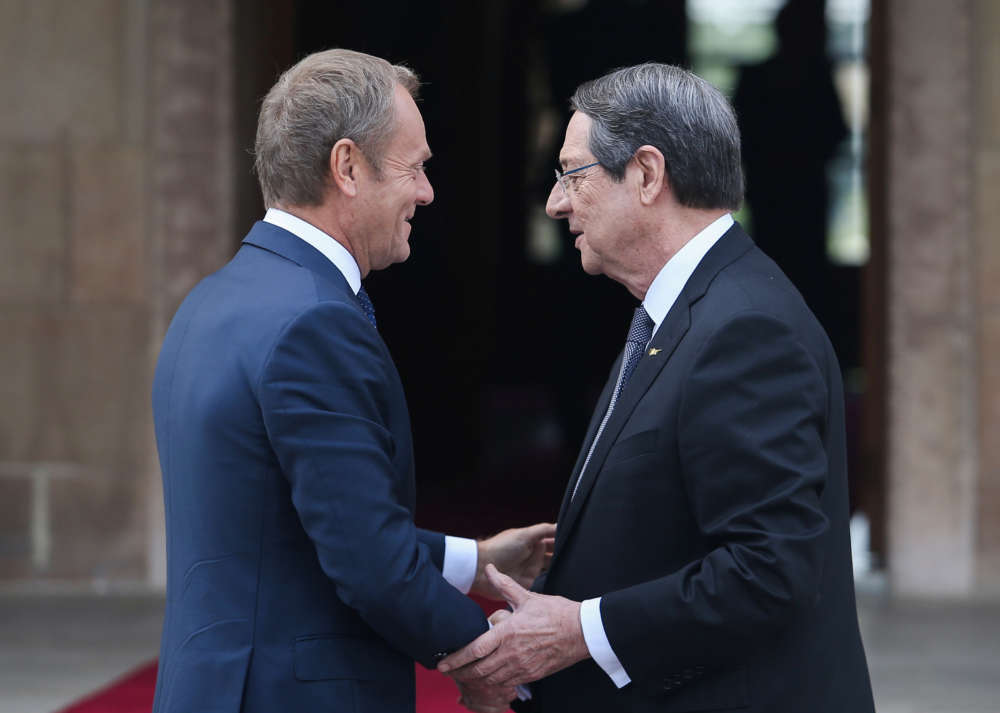 European Council President Donald Tusk on Friday voiced full solidarity with Cyprus in the face of Turkey’s continued drilling activities off the coast.

Speaking to the media after talks in Nicosia with President Nicos Anastasiades, Tusk said: “The European Council has strongly condemned these illegal actions. And in light of the new drilling activities by Turkey since the end of last week, I reconfirm that the EU stands united behind you. I call on Turkey to end these activities as they do not only undermine the recent efforts to resume Cyprus settlement talks but they also undermine good neighbourly relations between the EU as a whole and Turkey.”

The outgoing EU Council president also addressed Turkey’s military incursion into northern Syria  which he said was of grave concern and should stop.

“Turkey’s security concerns should be addressed through political and diplomatic means; a military intervention will only make matters worse. Instead of creating stability, it will create even more instability in the whole region, exacerbate civilian suffering, cause further displacement and threaten progress achieved by the Global Coalition against Da’esh,” he said..

The Kurdish forces that have been part of the Syrian Democratic Forces have been and are crucial in fighting Da’esh, Tusk noted.

“For both sides of the Atlantic, abandoning them is not only a bad idea, as President Trump said, but raises many questions, both of strategic and moral nature,”  he said.

And he added: “Turkey must understand that our main concern is that their actions may lead to another humanitarian catastrophe, which would be unacceptable. Nor will we ever accept that refugees are weaponised and used to blackmail us. That is why I consider yesterday’s threats made by President Erdogan totally out of place.”

On Brexit, Tusk said the Irish Taoiseach and the UK Prime Minister met yesterday and said they both saw – for the first time – a pathway to a deal.

“I have received promising signals from the Taoiseach that a deal is still possible. Technical talks are taking place in Brussels as we speak. Of course, there is no guarantee of success and the time is practically up. But even the slightest chance must be used. A no deal Brexit will never be the choice of the EU,” he concluded.