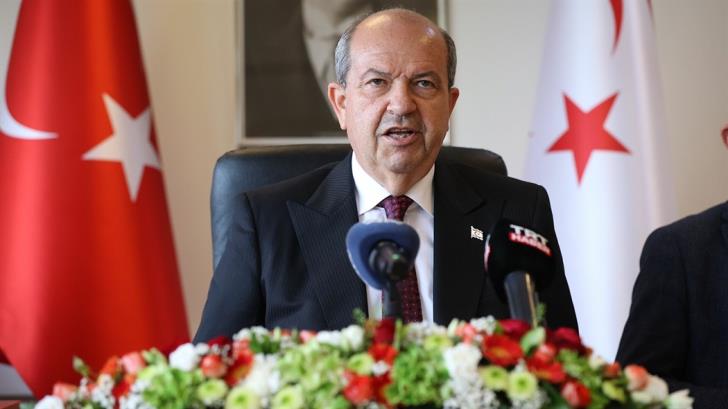 The government will send letters to 14 Turkish Cypriot ‘officials’ in the breakaway state in the northern part of the island informing them it would revoke their Republic of Cyprus passports.

Among them is incumbent Turkish Cypriot leader Ersin Tatar, known to hold or held passports of the Republic of Cyprus, even though they say they do not recognise the EU member state.

The east Mediterranean island was split in a Turkish invasion in 1974 and North Cyprus is recognised only by Turkey.

The only internationally recognized part is the Republic of Cyprus whose government said the actions of the Turkish Cypriots undermined the integrity of Cyprus.

Reunification attempts have repeatedly failed, and relations are at a new low after Turkish Cypriots demanded that peace talks be placed on a new footing.

And Turkey wet ahead in July opening part of Varosha – a fenced-in city abandoned by its Greek Cypriot residents in the 1974 war.

Cyprus would revoke, fail to renew or refuse to issue passports to individuals who participated in the pseudo state’s cabinet, or were involved in attempts to reopen Varosha, government spokesman Marios Pelekanos said late on Monday.

“With their acts and deeds they undermine the sovereignty, independence, territorial integrity and security of the Republic of Cyprus, in violation of the Constitution,” Pelekanos said.

Tens of thousands of Turkish Cypriots hold identification cards and passports of the Republic of Cyprus, as is their birthright based on the common state established with Greek Cypriots in 1960.

Local media have reported that Tatar, a strong proponent of Turkish Cypriot independence, obtained a Cypriot passport in 2000.

In addition, the government on Monday decided to proceed with the 5th Intergovernmental Act application against Turkey before the European Court of Human Rights.

By Annie Charalambous
Previous articleResearchers working toward one vaccine for many variants
Next articleElectricity bill prices in August up by 38.17% compared to same month last year