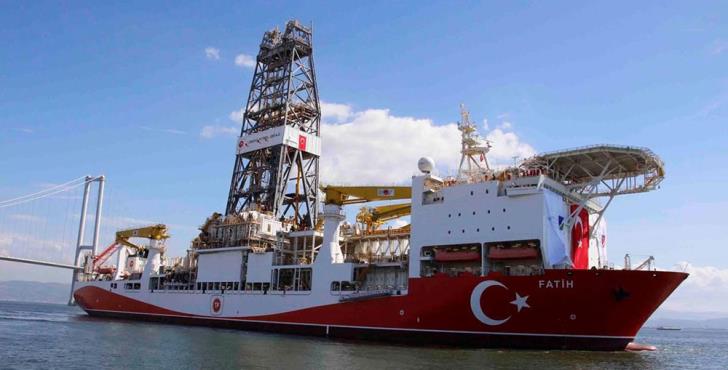 In a few days, the Fatih (‘Conqueror’) drilling ship will sail for Turkey’s first drilling in the Eastern Mediterranean.

The three ships belong to the Norwegian company ‘Siem Offshore’ which is a subcontractor for the the first two drilling operations. The shipowning company is involved in Cyprus as well, since three brand new ships, out of the 41 in its fleet are in the Cypriot ship register and fly the flag of the Republic of Cyprus.

‘Alanya-1’, in the eastern part of Antalya Bay, towards the well-known resort of Alanya, will be the target of the first drilling. Turkey has, since 2008, undertaken three seismographic surveys through the Turkish Petroleum Corporation (TPAO), The first was between 2008 and 2009 with the seismographic vessel ‘Malene Ostervold’ and in collaboration with the Norwegian company Wavefield, the second in 2009-2011 with ‘Viking Vanquish’ and in collaboration with CCG Veritas, and the third in 2013-2016 with ‘Barbaros Hayreddin Paşa’, given to Turkey by the, also Norwegian, Polarcus. ‘Barbaros’ expanded the surveys beyong Antalya and towards the area of Mersin. TPAO has given control of the technical aspects of the drilling to the ‘Azeri Drilling Company’ based in Baku, Azerbaijan.

The exact spot of the drilling will be known with the issue of a Turkish Navtex for the drilling rig’s protection zone. The Navtex is expected to be released soon.