Turkey should contribute to a Cyprus settlement instead of threatening 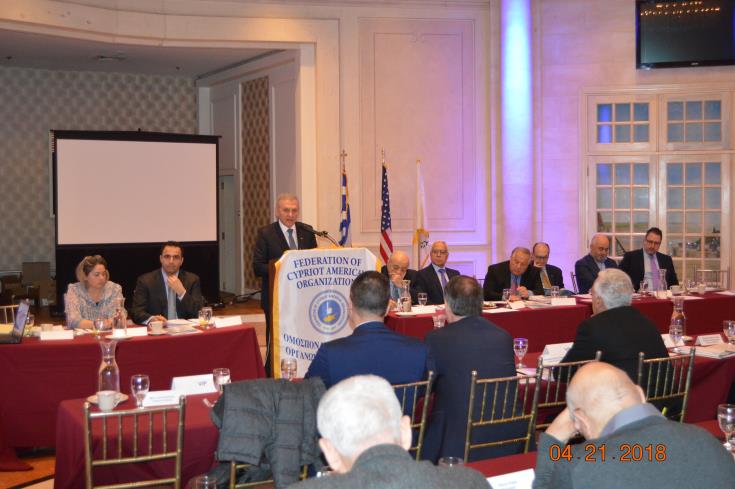 Presidential Commissioner Photis Photiou called on Turkey to assume a constructive attitude for a Cyprus settlement, instead of threatening and provoking the Republic of Cyprus.

Addressing Saturday the conference of the Federation of Cypriot American Organizations, in New York, Photiou briefed participants on the latest developments in the Cyprus problem and Turkey’s challenges and illegal actions in Cyprus’ exclusive economic zone, while underlining the arrogant behavior of Turkish President Erdogan.

We understand extreme statements by Turkish government officials with regard to a “plan B” in Cyprus and other alternative solutions, as well as Turkey’s actions in the EEZ to fall within this context, Photiou went on.

He noted that Ankara’s main goal is to retain full control over Cyprus and the Eastern Mediterranean.

Despite all this, Cyprus demonstrates good will to reach a Cyprus settlement through negotiations, the Presidential Commissioner said. He added that talks are the only way to reach a settlement based on international law and EU principles.

“Turkey cannot insist retaining a system of guarantees and security in a reunited Cyprus that allows for any intervention rights, neither about the stay of a number of Turkish troops whose presence will be reviewed only after 15 years” he said. Such provisions cannot be implemented in a normal state, as the UN Secretary-General already pointed, Photiou said.

He added that Turkey’s intransigent point of view led to the collapse of the Crans Montana talks, last summer.

Speaking about an informal meeting between the President of Cyprus Nicos Anastasiades and Turkish Cypriot leader Mustafa Akinci, earlier this week, he said the two men exchanged views in an effort to restore communication channels, and evaluate the state of play as well as the potential resumption of talks. The meeting, he added, yielded no results, with both sides retaining their positions.

He said, however, that the two leaders welcomed the Secretary-General’s intention to dispatch an envoy for exploratory contacts with all parties.

Speaking about other aspects of the Cyprus problem, the Presidential Commissioner referred to Turkey’s intransigence with regard to the issue of missing persons. We acknowledge the progress made by the Committee on Missing Persons but we would make more progress if the occupation force allowed for excavations in all areas, instead of restricting so-called military zones, Photiou added.

He said finally that Turkey’s cooperation in this issue is essential in order to put an end to the suffering of the relatives.

Photiou expressed finally the gratitude of the government and the people of Cyprus to overseas Greeks and Cypriots, for their political and financial support amid difficult times in modern history.

PSEKA President Philip Christopher said the Republic of Cyprus and Israel where the most reliable allies of the United States in the region, in contrast to Turkey, which he called an unreliable ally.

Kyriacos Papastylianou, the reelected President of the Federation of Cypriot American Organizations, said in his intervention that progress was made in relation to a cultural center housing all of the Federation’s activities. He also said that the aim was to register all Greek Cypriots living in America.