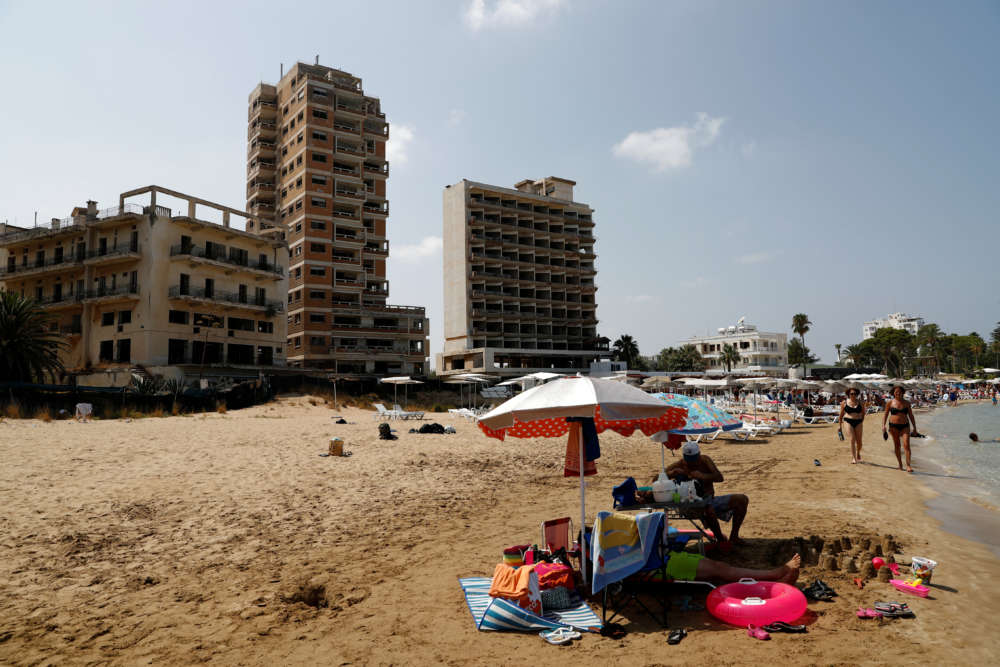 Varosha, a southern suburb of Famagusta, has been fenced off and abandoned since Turkey invaded northern Cyprus after a Greek-inspired coup in 1974.

Ringed by a fence which extends into the sea, the former holiday resort has been off limits to anyone but the Turkish military since its 39,000 Greek Cypriot residents fled advancing Turkish troops.

Speaking in Varosha after touring the area, Turkish Vice President Fuat Oktay said opening Varosha would have benefits for tourism, the economy and trade.

Keeping this coast of paradise idle is not acceptable legally, politically or economically, he said.

Turkish and northern Cypriot officials were continuing their inventory efforts there, he said.

“There is unfortunately an abandoned area here as well as rotting buildings. Our hope is that Varosha is revived in a way that will revitalise the economic, trade and social life here,” Oktay said. His visit to the region with Turkish and northern Cypriot officials marks one of the most concrete steps towards re-opening Varosha.

The government and political parties in the Republic of Cyprus have condemned the move while the refugee municipal council staged a protest at the Dherynia checkpoint.

President Nicos Anastasiades referred to Turkey’s actions as provocative. He said they will not be accepted, adding that the government will not remain with its hands tied.

“The diplomatic path, international law, European principles and values set out what will happen in the immediate future,” he said.

Addressing an event celebrating the completion of 60 years of Bishop of Constantia and Famagusta Vassilios, in Paralimni, Anastasiades noted that despite the recent reconfirmation by UN Security Council of the resolutions on Varosha, he said, “we witnessed yesterday an unacceptable situation.”

He added that the violation of the Republic of Cyprus’ sovereign rights whether on land or in its EEZ are also unacceptable.

Varosha, the fenced-off section of the Turkish occupied town of Famagusta, is often described as a ‘ghost town’. UN Security Council resolution 550 (1984) considers any attempts to settle any part of Varosha by people other than its inhabitants as inadmissible and calls for the transfer of this area to the administration of the UN.

UN Security Council resolution 789 (1992) also urges that with a view to the implementation of resolution 550 (1984), the area at present under the control of the United Nations Peacekeeping Force in Cyprus should be extended to include Varosha.

Kudret Ozersay, the “foreign minister” of the illegal regime in the Turkish-occupied areas of Cyprus, arranged in late August a press visit for Turkish Cypriot and Turkish journalists and media in the fenced-off part of Famagusta for the first time in 45 years and announced that he will gradually open the city.

A Turkish Bar Association event was organised in Varosha, on Saturday, with the participation of Turkey’s Vice President Fuat Oktay and Turkey’s Justice Minister Abdülhamit Gül.

Referring to the efforts to reach a solution of the Cyprus problem President Anastasiades said that “it is an effort for the country`s reunification, to establish the fate of missing persons in Cyprus and to restore inalienable human rights on the basis of a just, functional and therefore viable solution.”

“A solution which will be based on UN resolutions, will absolutely respect EU principles and values, will create conditions of peaceful coexistence and guarantee our state entity`s independence and sovereignty away from third countries` dependencies or the presence of occupying troops,” he added.

President Anastasiades said that “we have proven our respect of political equality. We have proven how much we respect our compatriots,” adding that, ” no one can overlook the fact that we are also obligated to respect the rights of Greek Cypriots.”

This is why, he explained, ” I will not accept or put up with the political inequality Ankara wishes to impose on our country.”

“What we seek is nothing less than what all other Europeans enjoy,” he noted.

He sent a clear message to all directions, as he said, that “all those expecting that I will give in to blackmail by third parties or inducements in the home front for something less than what we owe our citizens as Europe, will be disappointed.”

At the same time, he assured that “the effort for our people’s and divided country’s reunification remains my top priority.”