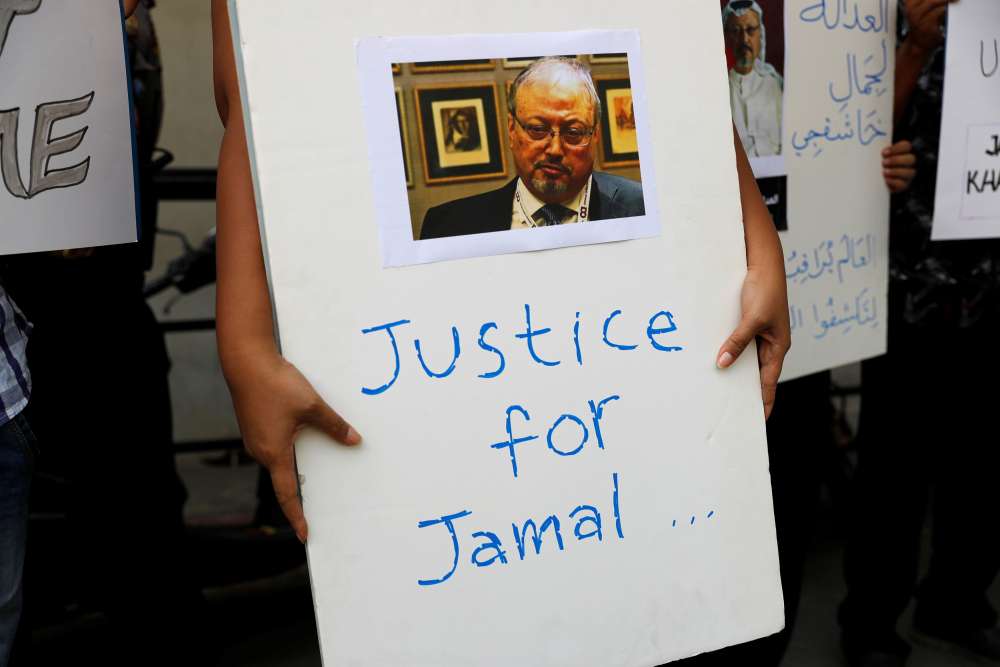 An adviser to Turkey’s president on Monday rejected Riyadh’s assertion that Jamal Khashoggi died in a fight, suggesting it “mocked” world opinion, as Western incredulity deepened over varying Saudi accounts of the journalist’s killing.

Khashoggi, a Washington Post columnist and a critic of Saudi’s powerful crown prince, disappeared three weeks ago after he entered the Saudi consulate in Istanbul to obtain documents for an upcoming marriage.

Riyadh’s reaction since – it initially denied knowledge of his fate before saying he was killed in a fight in the consulate – has left several Western governments incredulous and strained ties with the world’s largest oil exporter.

On Sunday Saudi Arabia’s Foreign Minister, Adel al-Jubeir, said that Khashoggi had died in a “rogue operation”. But some of his comments appeared to contradict previous statements from Riyadh, marking yet another shift in the official story.

A clutch of countries, including Germany, Britain, France and Turkey, have pressed Riyadh to provide all the facts, and Chancellor Angela Merkel said Berlin would not export arms to Saudi Arabia while uncertainty over Khashoggi’s fate persisted.

“One cannot help but wonder how there could have been a ‘fistfight’ between 15 young expert fighters … and a 60-year-old Khashoggi, alone and defenceless,” Yasin Aktay, an adviser to Turkish President Tayyip Erdogan and a friend of Khashoggi’s, wrote in the pro-government Yeni Safak newspaper.

“The ‘fistfight’ argument regarding Khashoggi’s death is a scenario which was hastily made up, as it became clear that all the details of the incident will soon come out,” Aktay wrote.

“The more one thinks about it, the more it feels like our intelligence is being mocked,” he wrote.

Erdogan has said he will release information about Turkey’s investigation in a speech on Tuesday.

Turkish officials suspect Khashoggi was killed inside the consulate by Saudi agents and his body cut up. Turkish sources say authorities have an audio recording purportedly documenting the murder of the 59-year-old.

For Saudi Arabia’s allies, the question will be whether they believe that Crown Prince Mohammed bin Salman, who has painted himself as a reformer, has any culpability. King Salman, 82, has handed the day-to-day running of Saudi Arabia to him.

Jubeir extended condolences to Khashoggi’s family. “Unfortunately, a huge and grave mistake was made and I assure them that those responsible will be held accountable for this.”

But, in some critical areas, his explanation appeared to depart from previous official statements.

He said the Saudis did not know how Khashoggi had been killed. That contradicted the public prosecutor’s statement a day earlier that Khashoggi died after a “fistfight” with people who met him inside the consulate. It also contradicted two Saudi officials’ comments to Reuters that it was a chokehold that killed him.

Jubeir also said the Saudis did not know where Khashoggi’s body was, though one of the Saudi officials had told Reuters it was wrapped up in a rug, taken out of the consulate in a vehicle and handed over to a “local cooperator” for disposal.

Prior to Jubeir’s interview, a senior Saudi official laid out a version that itself contradicted earlier explanations. That account includes details on how 15 Saudis sent to confront Khashoggi had threatened him with being drugged and kidnapped and killed him in a chokehold when he resisted.

A member of the team dressed in Khashoggi’s clothes to make it appear as if he had left the consulate. Support for that strand of the account appeared to come from footage aired by CNN showing a man dressed as Khashoggi walking around Istanbul. CNN described the images as law enforcement surveillance footage.

Some top U.S. lawmakers turned their ire on the crown prince and said they believed he ordered the killing. “Do I think he did it? Yes, I think he did it,” Republican Senator Bob Corker, the influential chairman of the Senate Foreign Relations Committee, said in an interview with CNN.

Both Republicans and Democrats have turned their attention to the role of the prince, with whom President Donald Trump and his son-in-law and White House adviser Jared Kushner have cultivated a close relationship.

Over the course of the crisis, Trump’s comments have varied from appearing to downplay Riyadh’s role in the incident, to warning of potential economic sanctions. He has repeatedly highlighted the kingdom’s importance as an ally.

Authorities were taking statements from five Turkish employees of the Saudi consulate on Monday, NTV said. Twenty consulate workers, including the consul’s driver, gave statements to prosecutors in relation to the incident last week, NTV has reported previously.

In all, prosecutors are seeking statements from a total of 45 employees, CNN Turk said.