Tsipras conveys to Erdogan need for Cyprus talks to continue 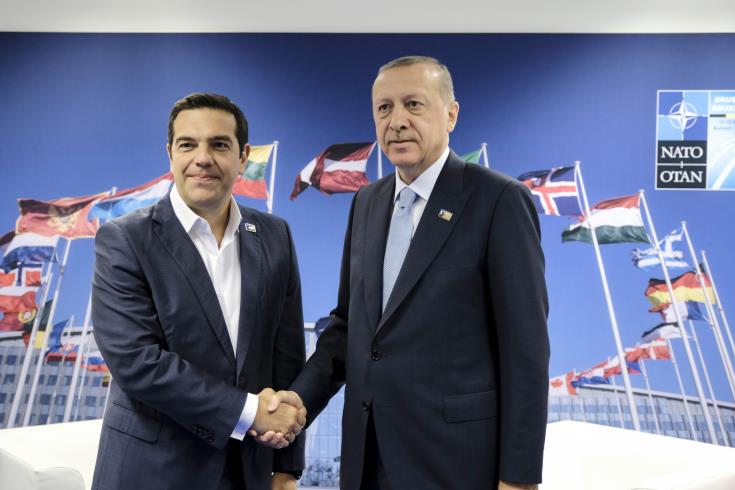 The importance to continue the talks for a solution to the Cyprus problem in the context of the UNSG Antonio Guterres’ framework was raised by Greek Prime Minister Alexis Tsirpas to Turkey’s President Recep Tayip Erdogan on Thursday.

The two men had a two-hour meeting on the sidelines of the summit NATO Summit in Brussels. Tsipras described the meeting as ‘difficult’.

The Prime Minister announced that both agreed on the need for close contacts between the foreign ministers of the two countries’ on this issue. Earlier, Tsipras had a telephone conversation with President of the Republic of Cyprus Nicos Anastassiades who conveyed a message to Erdogan.

Cyprus has been divided since 1974, when Turkish troops invaded and occupied its northern third. A UN-backed Conference on Cyprus last summer in the Swiss resort of Crans Montana, aiming to reunify the island under a federal roof, ended inconclusively.

Moreover, Prime Minister Tsipras emphasized the efforts of the two countries to reduce tension in the Aegean, after having reminded Erdogan that his recent visit to Athens aimed at improving relations between the two countries.

He said he told Erdogan that in 2018, Greece has made a new start and it was up to Turkey to positively contribute to the Greco-Turkish relations.

“Turkish violations and provocations in the Aegean continue and are dealt with on the basis of international law by the Greek side,” he said.

“I have presented Erdogan with data that highlight the increase in Turkish delinquency in the Aegean,” he said. Tsipras admitted, that this was not an easy meeting.

The Prime Minister also announced that he had urged the Turkish president to address the issue of two Greek soldiers detained in Turkish prisons, without charges for four months.

Tsipras said that Erdogan referred to the issue of the eight Turkish asylum seekers currently in Greece.

“I stressed that the Greek justice system is entirely independent,” said Alexis Tsipras and “I underlined what I have repeatedly stated that for the Greek government, coup instigators from any country, or anyone attempting to overthrow democratic legitimacy, are not welcome in our country.”

Tsipras also said that he discussed with Erdogan cooperation in the field of security which is of “particular importance during this period”.

“In 2015 -2016, cooperation between the two countries made it possible to drastically reduce refugee flows and deaths in the Aegean”, said Tsipras, adding that this cooperation also helped promote Euro-Turkish relations and the climate to further the talks for a viable solution to the Cyprus problem.

By In Cyprus
Previous article
Trump blasts May’s Brexit plan, says it puts trade deal in doubt
Next article
Anastasiades: No Cyprus solution if treaty of guarantee is still in place