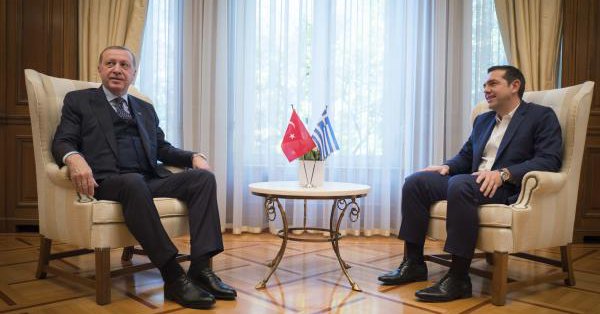 The Cyprus problem was among the issues discussed in a hour-long meeting between Greece’s Prime Minister Alexis Tsipras and Turkey’s President Tayyip Erdogan, in New York.

A Greek government source said that the atmosphere between the two men was improved compared to their last meeting in July, during a NATO summit and the Greek Prime Minister accepted an invitation extended to him to meet again in Istanbul.

On the Cyprus problem, Tsipras is said to have underlined Greece’s commitment to a just and viable solution on the basis of UN Security Council resolution and on the resumption of talks where they had stopped, on the basis of the Guterres Framework as it was shaped, when they ended in Crans-Montana, Switzerland in the summer of 2017.

At the same time, the sources say, the Greek Prime Minister stressed the need for the resumption of bicommunal talks.

Both men expressed their support of an informal trilateral meeting of guarantor powers Greece, Turkey and the UK, at FM level set to take place a little later.

Replying to a question the government source said that Turkey’s President “reiterated his support of the Guterres framework, something he had also said during the meeting he had with Tsipras at NATO, but also on the long-standing Turkish positions on the Cyprus problem.”