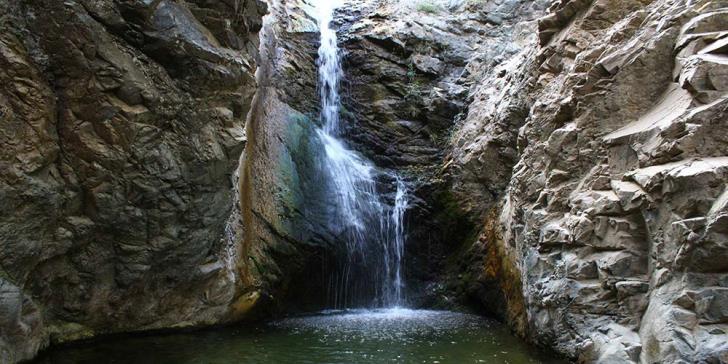 Concerns have been raised as to the adequate protection of Troodos’ waterfalls which are not included in the list of protected landscapes of the policy statement of the Department of Town Planning and Housing.

Moreover, although the waterfalls of the Troodos mountain range fall entirely within the Kryos River Basin and the Kourris Water Reservoir Protection Zone, the Environment Service did not consider necessary to submit the urban planning zones in the area to a Strategic Environmental Impact Assessment.

Myllomeris only became known in the past few years as its location was inaccessible until recently. Due to the opening of a road and the opening of an access trail, the Myllomeris waterfall is now one of the principal sights of Pano Platres and its natural beauty attracts many visitors. Visitors can reach the waterfall from Pera Pedi village, a 4.2 km distance and from Pano Platres towards Moniatis, a 3.8 km distance. A nature trail created by the Department of Forests starts at Panagia Faneromeni Church at Pano Platres and ends at the Myllomeris Waterfall.

Recently, the Ministry of the Environment renewed a town planning licence for the consolidation of four blocks and the separation of 19 plots of land in an area adjacent to Myllomeris. Following the planning permission, the Department of Forests granted a licence to cut down 53 trees. The proposed project is located at the site of Mosfilia. The total area of the four plots is 48,290 sq. metres, of which 42,698 square metres and part of it falls within the Nature Conservation area.