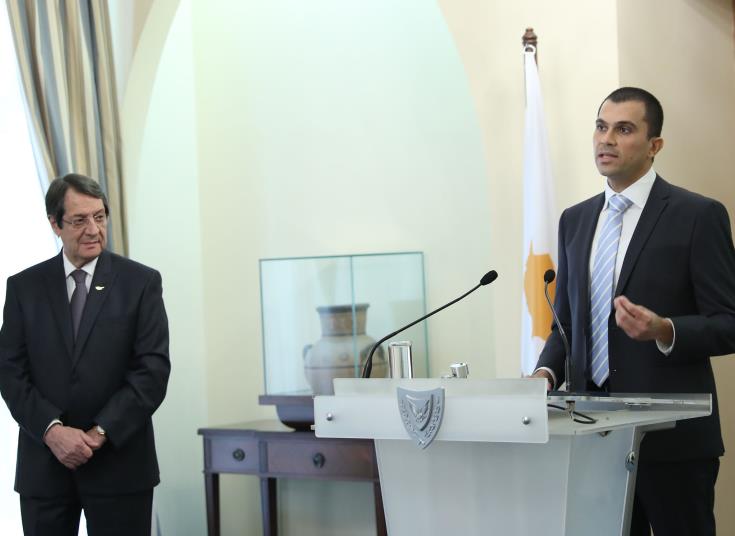 Tourism sector in Cyprus is entering a new era of modernisation, President of Cyprus Nicos Anastasiades said on Wednesday, speaking at the swearing in ceremony of the first Deputy Minister of Tourism Savvas Perdios, at the Presidential Palace.

The President spoke of “an important milestone for the tourism sector in Cyprus in general, which is entering a new era of modernisation, by officially obtaining its own autonomous deputy Ministry”.

He noted that the sector of tourism remains crucial for the economic development of the island, with its contribution to the GDP exceeding 13%.

As a result of the targeted policy implemented by the Government, he said, tourist arrivals have increased rapidly, adding that between January – November 2018 the total tourist arrivals amounted to 3.8 mn, exceeding the number of arrivals ever recorded in the first 11 months of the year.

Anastasiades stressed that with the establishment of the Deputy Ministry of Tourism and by drafting horizontal policies and actions, the Government aims at strengthening the strategy it has adopted regarding the modernisation and strengthening of the institutional framework that governs the sector of tourism and the effective tackling of problems and challenges occuring in the ever-evolving tourism industry and in a volatile international and competitive environment.

The immediate implementation of the integrated national tourism strategy 2018-2030 provisions under the supervision of the Deputy Ministry is a practical example of the Government’s political will and determination to this end, he noted.

Anastasiades said that the national tourism strategy includes innovative policies that will yield new significant results in the short and medium term on tourism development and the revenue from both traditional and new markets of high purchasing power visitors, the strengthening of tourist infrastructure and activity in Cyprus, the provision of better quality services, the extension of the tourist season, the promotion of new thematic destinations and alternative forms of tourism and the attraction of new foreign investment of high added value.

“The reforms, the draft laws and the implementation of the national strategy will take place gradually and with patience” the new Deputy Minister of Tourism, noted on his part, adding that “nothing gets done with a magic wand, but it takes hard work, teamwork and less talking”.

Perdios assured that as a Deputy Minister he aspires to collaborate closely with all the stakeholders of the sector and respond fully to their expectations.

“In everyone’s mind there are important common goals, such as defining a national strategy for tourism, extending the tourist season, finding investors for major projects such as marinas, theme parks, agrotourism development and the wider development of all our tourist areas,” he noted.

The Deputy Minister stressed that Cyprus would continue offering its visitors “courteous service, inspired gastronomy and authentic hospitality”. “Whatever form of tourism we are referring to – religious, sports, medical and other – what I have previously mentioned will always constitute its main pillars,” he said.

By In Cyprus
Previous articleCypriot bonds account for 4% of ECB’s public asset holdings, according to DBRS
Next articleCyprus Symphony Orchestra starts 2019 with Strauss and Tchaikovsky