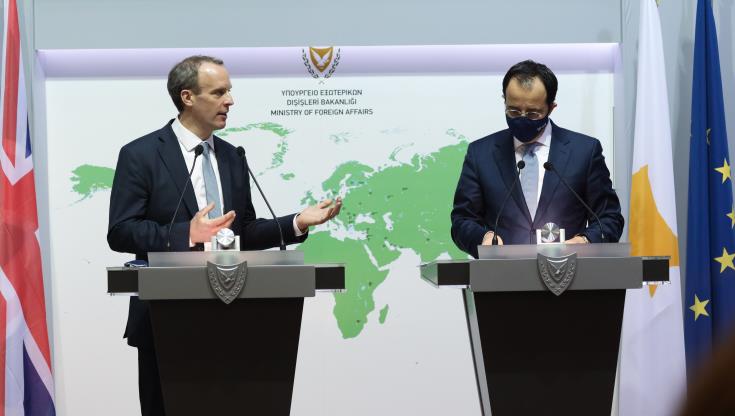 Three pro-Cypriot Conservative MPs have written to the UK Foreign Secretary highlighting their longstanding view that a negotiated settlement to reunite Cyprus must lead to a bizonal, bicommunal federal state with a single citizenship and a single international personality.

In their letter to Dominic Raab, seen by the Cyprus News Agency, Theresa Villiers, Sir Roger Gale and Matthew Offord note that this approach is consistent with numerous UN resolutions and has been backed by successive UK Governments over many years.

They reject other propositions, clearly stating that “division of Cyprus into two states, or a confederation, would not be an acceptable outcome.”

They welcome the Foreign Secretary’s recent visit to Cyprus, but note that during that trip he did not restate UK support for a bizonal, bicommunal federation (BBF), nor did he at the House of Commons when answering questions of foreign policy.

Responding to a question by Labour MP Bambos Charalambous, Mr Raab had described BBF as “a starting point”.

Therefore, they urge him to confirm the continuing support of the British government for this longstanding policy position.

The letter is dated 10th March. A read-out of a call between Boris Johnson and President Erdogan of Turkey the previous day had stated that the British Prime Minister had “emphasised that the UK continues to be a strong supporter of a comprehensive, just and lasting settlement of the Cyprus issue, based on the internationally accepted model of a bi-zonal, bi-communal federation.”

In an interview with Greece’s  ‘Ta Nea’ newspaper Mr Johnson repeated this position, adding that the model’s existing parameters as set out in relevant Security Council resolutions “are broad enough to encompass a range of solutions.”

The three Conservative MPs conclude their letter asking the Foreign Secretary to give “high priority” to support Cypriots in their continuing efforts to reach agreement on a united future for their island.